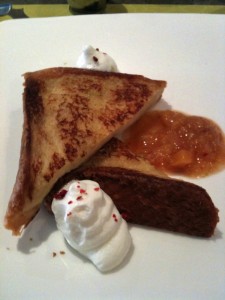 I’m pretty sure I can pinpoint the moment Heavy D, aka Dwight Errington Myers, the rotund rapper who brought us the fine jingle “Now That We Found Love,” jumped the shark. It wasn’t when he portrayed the half-wit migrant worker Peaches alongside Tobey Maguire in the “Cider House Rules,” though that was close. It was much earlier in 1991, when he appeared on Michael Jackson’s “Dangerous” album rapping on the song “Jam.” Consider the heart of his rhyme on that ditty: “Mingle Mingle Jingle. In The Jungle. Bum Rushed The Door. 3 And 4’s In A Bundle.”

If that wasn’t bad enough, Heavy also dances in the video alongside Chris “Mac Daddy” Kelly and Chris “Daddy Mac” Smith, aka Kriss Kross, originators of the backwards-clothes-wearing movement and prepubescent crooners of “Jump,” the #75 rated song on VH1’s “100 Greatest Songs of the Nineties.” Oddly, Kriss Kross never actually sing on “Jam.” They just hobble around in their ill-fitting reversed baseball jerseys and flash baby gang signs throughout the video. Did the King of Pop mercilessly cut their vocal part?

Heavy D and Kris Kross weren’t the only ones who embarrassed themselves. In case you haven’t seen the video recently, you’ll find Michael Jordan inexplicably playing basketball in a dark abandoned warehouse that just happens to have a spotless regulation NBA glass backboard and thousands of concert-grade floodlights. It gets really weird when Jordan gives Michael Jackson a piggyback ride and takes awkward lessons on the Moonwalk and splays akimbo imitating other moves from Jackson. Thankfully his Airness stays away from that lewd Jackson dance standard, the crotch grab.

I know all this because on my way to Wicker Park’s new breakfast emporium, Jam, I couldn’t get the Jackson song and its persistent Duran Duran-worthy orchestral hit out of my head, and had to watch the video on You Tube after my meal.

Braised pork cheeks, crowned with a fried egg, oozy ricotta salata, and pickled plums and stuffed into a crispy French bread, are so tender, they fall apart under a stern gaze.

A hazelnut-sage perfume roils around glazed buckwheat blintzes filled with glistening luscious shreds of lamb and a tiny-ice of Asian pear and through a micro-forest of spicy mesclun greens. 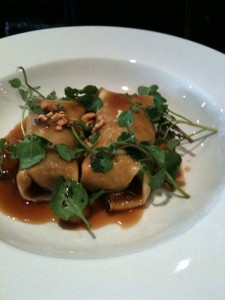 Folks have been eating breakfast dishes for dinner for years, but only in search of carbohydrate comfort, not because such fare is more elegant than a gourmet supper. Jam is the first breakfast place I’ve eaten in Chicago, where creativity, refinement and flavor align in a manner coincident with fine dining. It’s certainly the first breakfast place at which I’ve been served an amuse bouche, a smurf-sized smack-yo-momma-good flaky biscuit smothered in cheddar chive butter.

With wait staff topping off coffee (a tad overpriced at $3 for drip, even if it is Metropolis) and water with the efficiency of Helio Castroneves’ Indy pit crew, service is just as refined as the food.

While weekends here are your typical line-out-the-door-type affairs, the minimalist dining room outfitted with rustic cement slab tables topped with chartreuse bubble-pattern Chilewich designer placemats offer plenty of room to linger over your favorite newspaper or  to fold out a 17” Macbook Pro on weekdays.

Sure, you might be able to get ten sausage biscuits at McDonald’s for the price of an average Jam entrée ($10) but it wouldn’t be close to an even trade. Considering the incomparable quality of the food, there’s a lot of value here. Just don’t forget cash, because unlike the Golden Arches, Jam doesn’t take Speedpass, American Express, or any credit cards for that matter.