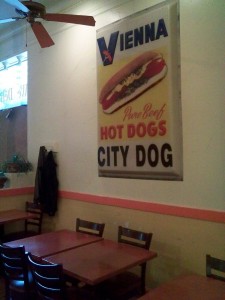 If you lived on the north side of Chicago in the early eighties you might have seen a gleaming brick red Crown Victoria rolling down Dempster Avenue blasting Boston’s “More Than a Feeling.” If you pulled up next to that bitchin’ ride and glanced in the back seat, you probably would have seen a young Eddie Lakin slunk down in the maroon leather bench seat slurping on a milkshake.

Lakin’s father, the car’s owner, grew up in Albany Park with the Skokie hotdog barons who opened legendary spots like Herm’s and Poochies, and many weekends, he’d take his son to visit his friends’ restaurants. It was there, chowing down on burgers and Polishes, that the seeds for his forthcoming Evanston burger shack Edzo’s were planted.

Lakin is probably the most overqualified owner of a burger and hot dog joint since Hot Doug Sohn walked out of Kendall College and bestowed duck fat French fries upon the world. A political science graduate of the University of Illinois, Lakin worked as a record store clerk after college, but realized there was no future in it, and enrolled at the Cooking and Hospitality Institute of Chicago (CHIC). He says, “You come up with an idea in the morning, do the prep, plate it, and send it out to the customer all in the same day. There’s an immediacy to cooking that’s really gratifying.”

After graduation, Lakin worked at the defunct Chicago restaurant Spruce and then toured Europe with some friends. He stayed behind in Barcelona and cooked traditional Catalan lunches like fried cuttlefish and paella for local factory workers. He says, “I’d put out lunch, go nap on the beach off the Mediterranean Ocean, and then party all night.”

Recharged, he came back to Chicago and got a job at Tru when Rick Tramonto still helmed the pass. When he started there, he’d hoped to learn how to put out the best food in world, but for him the reality never met his expectations.

He moved on to Bin 36, Carlucci’s, opened a short-lived tapas spot in Wheeling for the Bar Louie folks, and eventually became a general manager for the Rosenthal Group, which operates the local Sopraffina cafes. When he got laid off from that job last fall, he took some time off to spend with his young children Henry and Nora, and started the thoughtful food blog Cooking and Eating in Chicago.

Despite his wide-ranging experience, Lakin never really wanted his own place. But in this economy he knew he needed to open a spot if he wanted to earn a decent living. He says, “In the restaurant world, the kind of jobs that pay well are tough to get. In this climate, corporate chef gigs are often the first to go.”

With his gourmet pedigree, you’d expect Lakin to open a high-end spot or at least a downscale gourmet place. Lakin says, “I can count five places like that that opening in the next few months. You got Michael Kornick (MK) and Graham Elliot (Bowles). I wanted to do something different.”

With Edzo’s, Lakin is instead opening a seventies-style greasy spoon inspired by those pilgrimages to his father’s friend’s places. He’s bypassing the familiar fifties-era chrome-trimmed look in favor of a bright funkadelic purple, orange and green paint scheme. His logo, which could double as the header on a disco-era album cover, is inspired by the vintage Houston Astros uniforms. There is no shag carpeting in the restaurant, but there is an old “pure beef” Vienna hot dogs sign and a vintage tub of Cudahy’s Leaf Lard.

Though there is a burger or hot dog stand on seemingly every corner in Chicagoland, Lakin’s competitive edge will come through subtle attention to quality. Edzo’s will feature freshly ground burgers, hand-dipped milkshakes and fresh-cut buttermilk-marinated onion rings and chicken tenders fried to order. He says, “We’re not gonna be so hardcore that we make our own pickles or sauerkraut, but we’ll always look for fresh product and avoid any product with life-extending chemicals.”

Though his primary aim is to serve the everyman, as a gourmand and trained chef, he’ll roll out a few fun food tricks including an inside-out grilled cheese (basically an American-style croque monsieur), truffle fries, and Taylor St. Fries topped with Al’s Italian Beef gravy, roasted peppers and giardiniera. There’s also a P B and B, a peanut butter and bacon sandwich that he invented as a kid by slathering pancakes with peanut butter, stuffing them with bacon and folding the whole thing in half.

Lakin says he’s inspired by Doug Sohn and sees Edzo’s as a cross between Hot Doug’s and the national burger chain Five Guys. Like the amiable hotdog proprietor Sohn, Lakin hopes to be standing at the counter of his restaurant years from now, a central character, mixing it up with the locals. It’s too early to tell whether he’ll became an Evanston fixture, but in a week or so when Lakin opens up the doors and fires up the Journey and Zeppelin on Edzo’s speaker system, he’ll definitely be on his way.

Truly an amazing concept!! I have heard about thee Lakin extraordinary wonderful dishes in the past…this will be just oh so more unique and out of my childhood, that now I will be able to share with MY own children!! Oh what a memory that will be for them! Thank you Eddie for making this possible!! Looking forward to being there fo ryou when you OPEN!~!…kristine from Libertyville

Hold a table for four at the end of December when we’re visiting from Colorado.

Best of luck with the opening!

Ate here today for lunch – AWESOME! I got a double griddle burger with cheddar, lettuce, tomato, pickle, ketchup, onion… It was absoutely delicious. Also shared the truffle fries with a friend. They were fresh cut potatoes (as far as I could tell) with a generous sprinkling of truffle salt. The burgers are very reasonably priced (I think around $4.50 for the double 4oz patty I got or a single 8oz patty). Will definitely go back!

The nutella milkshake is the best. Unique, generous, comes with the metal cup it is made in so you can have a little more, and has whipped cream and a cherry. Just great. The fresh cut fries are very good. The burger is OK, but I think a bit overrated. Even though it is made with freshly ground beef, and is reasonably priced, I don’t think it has a great flavor, and I can easily cook a better one. But what is really special is to have the personal attention that is given to you as you order, and to… Read more »