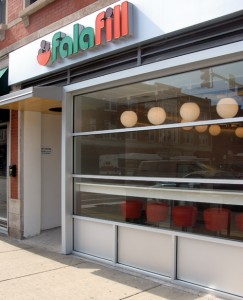 I used to think the greatest thing the Coptics (Christian Egyptians) bestowed upon the world was the sixth secretary general of the United Nations Boutros Boutros-Ghali—well, at least his name, which may be the most amusing political moniker of all time. Turns out, though, I’m wrong. Their superior gift to humanity is falafel.

Forbidden to eat meat during certain Christian holy days, foremost the Lenten holiday, and seeking alternative sustenance, the Coptics ground fava beans, mixed them with spices, formed them into patties or balls and deep fried them. As the dish migrated toward the northeast, Chickpeas were substituted for favas.

As the Jewish diaspora resettled in the Middle East, they adopted the dish as their own. Falafel has become such a touchstone in Israel that it’s likely any scientific analysis of the particulate content of air in Jerusalem these days shows at least a few parts per million of chickpea and cumin.

My own history with the falafel, though short, is obsessive. I grew up in parts where a vegetarian, and the entrees he or she might consume, was pretty much greeted with the goodwill reserved for a Packers fan at Soldier Field. At best, a vegetarian would be a source of amusement at Thanksgiving dinner, regarded like a carnival oddity, and placated with a jiggly disc of canned cranberry dressing.

As such, I didn’t get my first bite of falafel until college. Luckily I picked the University of Michigan in Ann Arbor, embracer of all things green (hash bash, carbon neutrality) long before Ed Begley Jr. bought his first Toyota Prius. Falafel balls were everywhere. My spot for the stuff was Jerusalem Garden, a tiny lunch counter done up in red-and-white-painted Soviet gulag-style cinder block. I didn’t go there because I was a particularly discriminate eater, but because the Garden was a block away from my favorite used-music store, Encore Recordings, and the fear of displeasing a haughty record clerk with one’s music choices generates quite the appetite.

I don’t remember flavor particulars, but I know the falafel was good enough such that the Garden became a respite after exams and I became a sucker for that coriander-and-cumin perfume and the crunchy/fluffy dichotomy of a perfect ball.

Since then, I’ve traveled all over to find the best, and while there are even better examples, one of my favorites is from L’As du Fallafel in the Marais neighborhood of Paris. I’d heard it was Lenny Kravitz’s favorite. Note: one should probably not take culinary advice from a man who rocks skinny jeans better than Kate Moss, but this time things worked out.

The energy of the L’ As is frenetic, and watching the cooks feverishly form hundreds of balls an hour with just a few spoons and their bare hands is mesmerizing. Harissa sauce adds a touch of fire and the balls are super fresh. As a bonus you get to watch all the young Hasidim chillin’ in the street outside, which is eminently more compelling since the success of Matisyahu convinced me they might all be potential reggae musicians.

Despite my fervor for falafel, in the last decade, it has suffered an ignominious fate. In 2002, the FBI was discovered data mining the buying habits at Bay area grocers, aka following the “falafel trail,” in the hopes that a spike in purchases of certain foods, like say hummus, might indicate a terrorist sleeper cell. Based on this surveillance technique, one wonders if the FBI regarded Berkeley as the center of world terrorist activity.

In 2004, Bill O’Reilly, Fox’s No Spin Zone overlord, transformed the deep-fried ball into a Clintonian cigar of sorts when reports surfaced that he allegedly said that he wanted to rub a falafel (he confused it with a loofah) on one of his female producer’s private parts. 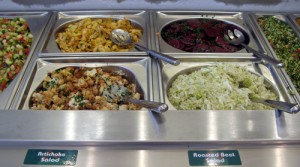 Back to redeem the legume fritter is a new Lakeview spot, Falafill, which comes from the guys who brought you Wicker Park’s Souk. There are no belly dancers or hookahs this time around, just a tiny room with mod orange seats and gleaming white surfaces, what a diner imagined by the set designer for the movie “2001: A Space Odyssey” would probably look like.

The crispy falafel here features a haunting cumin undertone and is pretty equal if not better than most local falafel I’ve had. The pita wrap wasn’t terrible; however, if all you do is falafel, it shouldn’t be coming from a plastic bag on the back counter.

The good news is because of Falafill’s super pickle bar, a garden of earthly delights (I haven’t been this excited about condiments since the Quizno’s pepper-bar commercials featuring those skeevy hampsters), that includes everything from pickled mango to creamy garlic sauce, you should be skipping the sandwich in favor of the falafel “salad bowl” anyway so you can pile on the excellent sides. The baba ghannoug, which uncoils in your mouth with a soulful smokiness, is superior. The best part about Falafill though might just be that every item on the menu is priced under ten bucks, something the old poor college kid, and now, the parsimonious adult, in me loves.

Get a day job.