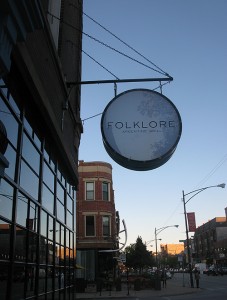 Whenever friends came to town with the itch to throw down $50 for hunks of fire-licked glistening meat carved from glinting scimitars wielded by fake gauchos at spots like Fogo de Chao, Sal y Carvao or Brazzaz (the best of the three), I usually stopped at Sam’s for a couple bottles of Chilean or Argentine red and headed over to the popular BYOB Tango Sur in Lakeview instead.

Tango Sur doesn’t have the gigantor upscale all-you-can-eat salad bar larded with salumi, cheese, shellfish and all manner of stomach-filling carbohydrates cleverly designed to block you from actually eating much of the more expensive grilled meats. However, Brazzaz et al don’t have a swaddling awning-covered patio on the corner of Southport and Grace like Tango. There’s no soft Lake Michigan breeze, the beckoning blinking bulbs from the Music Box theatre marquee or the buzz of the Lakeview citizenry on any summery Friday night.

After a few hours, with Tango Sur’s steaks long simmering in their stomachs and with the only red wine left dotting the tablecloth or buzzing in their heads, next time they were in town, my friends begged to return.

I also owed Tango Sur a debt of sorts. Those of you who read me regularly know my consumption of offal is rivaled only by maybe the peasantry of eighteenth-century Europe. Of course, growing up on Big Macs and Burrito Supremes, my veneration of organs wasn’t always so. Tango Sur was certainly a partner in this transformation, one of the first places I ever had sweetbreads and, as their menu dubs it, black sausage.

I knew by then that sweetbreads were neither sweet nor bread, but rather the thymus gland of a young calf. Sounds gross, sure, but remove the protective membrane, soak in milk, bread and deep fry ‘em, and you’ll be popping the little nuggets like Orville Redenbacher’s finest kernels.

However, it turns out “black” refers to the color of cooked blood, the primary binder mixed with pork or beef, fat and a whole manner of spices in this sausage. Thankfully, I’d always been a little obsessed with Dracula. After my first bite at Tango Sur, the custardy mix larded with sharp onion and sweet lulling cinnamon and clove spice, I realized this was my thing. 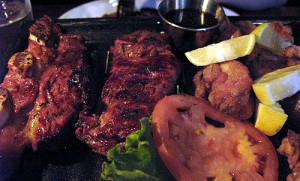 And so, enamored with and indebted to Tango Sur, there’s no way I’d miss checking out Tango’s new sister restaurant Folkore in Wicker Park. Located on Chicago’s hipster Magnificent Mile, Division Street, it is quite the meat market. However, unlike, say, nearby Moonshine or Angels and Mariachis, Folklore’s appeal isn’t quite as much about working out a weekend shag as it is about supping on serious steak.

One bad thing about Tango Sur is that if you couldn’t score a patio seat, fording through the cramped interior was almost as tough as trying to bust through the early nineties Dallas Cowboys offensive line. In contrast, Folklore, with its high ceilings, wide aisles, exposed brick and rustic wood touches has the look and space of a West or South Loop loft, albeit with a bevy of wall-mounted tchotchkes that looked like they were cribbed from the Gaucho surplus store.

Also, unlike Tango, Folklore isn’t BYO, but the value-priced wine list is full of so many good South American reds, including a lush 2006 Chono Carménère, you’ll hardly care.

It could be the enthusiasm of running a new location, but the preparation of food at Folklore is definitely a touch better than Tango’s. Empanadas are flakier and the beef inside juicier. The oozy cheese and sweet corn version is the best. The churrasco, a slab of sirloin, is trimmed assiduously, and each bite of the slab sprinkles a shower of satisfying salt and spice.

Each item on the parrillada para uno, a platter of mixed meats served with the tableside pomp and circumstance of a sizzling fajitas plate at your average Tex-Mex franchise, is expertly grilled. Flap steak, a cut filled with plenty of fussy connective fibers, has no surplus chew, only moments of medium-rare majesty. Sweetbreads are crispy, and they cast off a perfume of rich oil and sweet meat that’s reminiscent of perfect fried chicken. And except for an inedible rubbery speck that snuck its way into one of my links, the black sausage is a firm cinnamon-spiced meat custard that ensures I’ll likely never step foot in one of those overpriced all-you-can-eat meat parlors ever again.