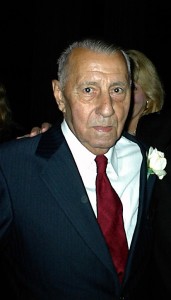 I imagined the unburdening would come much later; a slow uncoiling where memories like ethereal tendrils eventually roiled around and invaded my indifference. But, the literal heft of death unraveled the protective order of my subconscious sooner. For the weight of bearing a pall-draped twenty-gauge steel casket and the body of my grandfather was much heavier than I expected.

For ninety years, Alexander Maziarz was the embodiment of the stoic patriarch. He was the cornerstone, a cheerleader, the doting grandparent, the inspirer. He lived through WWII and endured the communism that befell Poland in its wake. In emigrating from Poland he gave up a convenient life as a successful manager of a commercial dairy for wrist-wrenching servitude as an assembly-line butcher to better life for his family in America. And, of all my grandparents, my mother’s father, Alexander Maziarz, was my favorite.

Though he spoke little English, our currency toward intimacy was sports and food. Sometimes, it was sports alone, the exchange of grunts and curses while watching the once and still hapless Detroit Lions on a rabbit-eared console-style Zenith tank of a tube TV that always bore terrible reception. Thankfully we had the Red Wings, the grace of their mid-nineties Stanley Cup wins to balance us out, and my grandfather’s faithful questioning Polish-accented refrain, “Vings gud, no?”

Sometimes we spoke through sports and food. On June 10, 1983, he took me to my first baseball game, the Detroit Tigers vs. the Cleveland Indians. I remember the wide-eyed moment of emerging through a narrow tunnel and out to the verdant expanse of grass and an azure sea of plastic seats. But, what I remember most were the hot dogs.

My grandfather was a sausage maker for Kowalski Sausage Co. in Hamtramck and the trip to the ballpark was a company-sponsored outing. Before we boarded a bus bound for the corner of Michigan and Trumbull, there was a pre-party in the company parking lot where he handed me my first Kowalski dog, a pink charred number with a natural casing full of sputter and sizzle. In that moment, the relationship between hot dogs and baseball transformed from an abstract American cultural phenomenon to a personal obsession. Every bite of a Best’s Kosher at US Cellular Field since, as well as the adoration of snappy Vienna at temples like Hot Doug’s and Jimmy’s, was an attempt to revel again in that moment.

Mostly, though, my grandfather spoke to me through food alone. As a butcher, he made plenty of homemade kielbasa, dense thick porn-worthy wrinkled links full of chunky bits of white fat and god knows what else. They were terrifying, and yet, when my mother sliced off rounds, fried them and sandwiched them between grilled cheese, the sausage became a surefire dose of culinary comfort.

Though they’re not nearly as garlicky, at least one afternoon a month I hunker down in my car and listen to the roar of cars fording the Kennedy Expressway while I chomp on a Maxwell Street Polish from Jim’s Original. I perform this ritual in the hope that as a Detroiter who’s fallen madly in love with this city, a consistent diet of Polish sausage from a legendary stand will somehow get me closer to being a real Chicagoan, but mostly because it keeps me close to my grandfather.

When we weren’t chowing on sausage, my cousins and I were filching swigs of his homemade spirits stash. The firewater, a blend of Spirytus or 190-proof clear spirits, that I often bought him at Binny’s, and fruit from the trees in his backyard muddled in Mason jars, would knock Muhammad Ali on his dupa (ass).

If hooch was his, pierogis or Polish dumplings were the domain of my grandmother. When she died (September 11, 2001 no less), my grandfather started making them for us. In between the time she passed away and the moment he picked up the dumpling vocation, I searched Chicago for a substitute, and found the blueberry pierogi at Smak Tak to be the best approximation. For various reasons, both objective and nostalgic, they were never quite as good, but it seems, once again, they’ll have to suffice.

Because my grandfather loved the carbohydrate comfort of his European childhood, he was a sturdy man, never fat, but always solid, and why ten or fifteen years ago, his casket would have been a monster to bear. The ravages of an ailing heart and the death of his wife, however, had wittled him down, and so while carrying him away was difficult, it was easier in the literal sense.

And after we did, we retired to his house after the wake to reminisce, and inevitably to claim a piece of memory, if that was even possible, through some of his possessions. I inherited his sausage maker, his cheese grater and his champagne coupes. The goldmine, however, was in the basement, a past season’s worth of his pickled and preserved fruit and vegetables. I grabbed a trove of the dill pickles, a bounty more garlicky than his sausages. As I write this, I anticipate crunching on them in the weeks to come. It seems, even in death, he’s once again found a way to speak to me, to soothe, and wouldn’t you know it, he did it through food.

What a wonderful, loving eulogy. You’ve certainly cast food and family into the leading roles they so well deserve.

Mike,
What a nice tribute to your grandpa. He would be proud to read this.

What a lovely tribute, I got a little teary-eyed. I fear losing my maternal grandmother for many reasons, but I know how much I’ll miss her cooking (and our bond through food).

Mike,
Great memories for the rest of your life. Make sure you pass them on…

Michael! As a graduate of U of M , I knew we had a connection there,but when i read your tribute to your grandfather, and his and your Polish heritage, Hamtramck, and Kowalski Sausage Co., I realized it was a larger one. I grew up in Hamtramck in the 50s and am well familiar with KQS, the facility on Carpenter St, & the plant on Holbrook. I recall walking past their building on Carpenter as a child an simply being intoxicated by the aroma of the sausages, spices and smoked meats that wafted through the air. We also had a… Read more »