by Brian Hieggelke
October 26, 2009Filed under: 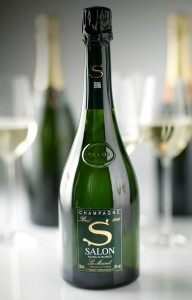 You should always cook with good wine, but whoever set that rule probably didn’t expect anyone to deglaze their risotto pan with $400 Champagne like Jean-Baptiste Cristini. Cristini didn’t want me to mention this, probably because you’d think he’s some snooty rich dude. He’s not. He just happens to work for Salon and Delamotte Champagnes, and was lucky to taste some 1988 Salon that hadn’t aged well and got it as a side perk.

Such circumstance is emblematic of Cristini’s life. He’s like a younger version of the guy from Dos Equis’ “Most Interesting Man in the World” beer commercials, a cosmopolitan handsome 28-year-old dude who drinks Grand Cru Champagne like tap water. He hangs out in Paris on weekends with his girlfriend, a veteran chef of Michelin-starred kitchens, throws parties for friends larded with Iberico ham and trophy wines, and works as the globetrotting export director for one of the best bubbly makers in the world.

The luster of Cristini’s employer Salon/Delamotte shines even brighter. Located in the French commune of Le Mesnil sur Oger in the Côte des Blancs, Salon/Delamotte produces some of the world’s most prestigious Champagne. If you haven’t heard of Salon, you’ve likely heard of its cohorts Cristal and upstart cousin Dom Perignon which produce 300,000 and 5 million or so bottles a year respectively. If this trio of sparklers were baseball cards, Salon Champagne, which produces no more than 60,000 bottles in a vintage year, would be its Honus Wagner.

Salon’s not even produced every year, only an average of approximately 3.5 times a decade when a particular harvest is deemed truly exceptional. Even more extraordinary, at least to an American sensibility in this economic climate where everything seems to be closing down, the chardonnay grapes for Salon blanc de blancs (white of whites) come from the same twenty family-owned parcels founder Eugene-Aimé Salon selected, based on the quality of their grapes, over eighty years ago. There’s an economic incentive to produce the bounty behind one of the world’s best Champagnes, but the cooperative’s long life is also a function of pride and good relationships.

On a freelance writer’s salary, I don’t get to drink too many (read any) $400 dollar bottles of Salon, and my first introduction to the brand actually came through Salon’s sister estate Delamotte. The devaluation of the American dollar against the Euro and demand from Asian markets has driven the price of my old go-to non-vintage favorite Bollinger, once $35 a bottle, to over $70. Delamotte Brut and Launois Pere & Fils Blanc de Blancs, which currently retail for around $37, were some of the first real quality champagnes I turned to after I gave up Bolly.

Inevitably when folks talk about Delamotte, someone points out that when Salon chooses not to make a vintage, Delamotte gets the Salon grapes, and so drinking Delamotte is akin to drinking Salon for a tenth of the price. While there’s some truth to this, Delamotte is a separate house, and the grapes for their Champagnes come from many more vineyards. In some ways, it’s easier to make Salon, a pure expression of an exceptional, focused small harvest, than it is to make great Delamotte. Cristini says, “We work so bloody hard on it [Delamotte], spending 650 to  700 [man] hours per hectare working in the vineyards. And yet it’s always crushed down like the little brother. It’s a different thing.”

Every once in a while Delamotte may even show better than Salon. Cristini thinks the 1985 vintage of Delamotte Blanc de Blancs drinks better than the comparable vintage of Salon. If that’s true, there’s a pretty incredible deal to be had, as 1985 Delamotte is available for a third of the price of ‘85 Salon if you can find it.

Delamotte is clean and light and has a zippy palate-coating texture that doesn’t overwhelm its inherent delicate fruity notes. It’s so easy drinking, if you don’t watch out, you might not stop until you wake up next to someone whose name you don’t remember.

I get at least a hundred invitations to dine with wine folks each year, but I generally turn them all down. I figure it’s better to drink a wine blind or without some marketing dude telling me why I should like their stuff. My affinity for Delamotte, however, was such that when I heard Cristini would be in town it was the first, and likely only, invitation I’d accepted all year. You can listen to “The Joshua Tree” on CD a thousand times, but when U2 comes to town, you should probably also get some tickets. You never know when you’ll see that one-night-only Edge solo or Bono vocal.

In some ways that’s just what happened as I got to taste Delamotte Brut Rose, which is tough to find locally. Unlike many roses which are the result of blending a separate red and white wine, Delamotte relies on the light skin contact of the darker Pinot Noir grapes to impart color. The light exposure means there is very little bitterness or tannin in the final Champagne, resulting in a clean, pure sake-like expression of rose that exhibits light strawberry notes.

With Thanksgiving and Christmas around the corner, Delamotte would certainly be great at the table. If you want to try before you buy a case, you can drink a bottle at Pops for Champagne. Unfortunately the brut and rose are tough to find locally at retail (and you can’t get it from non-Illinois retailers due to recently passed draconian interstate mail-order laws), however the 1999 Blanc de Blancs (my favorite) is available at Binny’s, and for a much better price ($59) via Illinois retailer Flickinger wines www.flickingerwines.com.