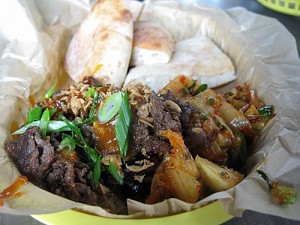 There are a lot of things about Belly Shack, the new Chino-Latino (technically the style is “Puerto-rean,” as chef/owner Bill Kim is Korean and his managing partner/wife Yvonne Cadiz-Kim is Puerto Rican, but that sounds like a bad stomach ailment) restaurant in Humboldt Park that I don’t love.

The menu with sections titled “SAMMICH” and “U KUD LIK THIS” (for the soft-serve ice cream—Is that “like” or “lick”?) which seems to be the literary collaboration of the dyslexic cow mascots of Chik-fil-A and Tony Soprano is pretty groan-inducing.

Then there’s the cutesy faux wall graffiti featuring Hallmark-card friendly protest aphorisms like “Enjoy More. Use Less” and “More Bike Lanes.” There’s also a painting of a dude grasping at a chain-link fence looking like he’s about to get frisked while sporting a t-shirt that says, “Eat it.” If this were a comic-style mural, I’m pretty sure the next frame would show that dude surrounded by rabid cops unholstering billy clubs and going in for a little Jon Burge-style Chicago Police justice.

I guess I’d really like to see a little more incisive commentary here, maybe a painting of a befuddled Mayor Daley caught in the cross-hairs, Public Enemy-logo style, or something slightly less, but still controversial like the phrase “Schools. Not Olympics.” After all, when you’re serving $9 tofu and organic brown-rice jibaritos, probably the biggest invitation for a “Yuppie Go Home!” window tag from an anti-gentrification graffiti gang since the first Starbucks opened in this hood, you better come correct.

I also have mixed feelings about the reclaimed industrial interior design scheme at Belly Shack. The acoustic tiles plastered on the ceiling look kind of spacey and ensure you won’t have to scream your head off to be heard by your dining companions. The communal table made from 200-year-old reclaimed maple and the yellow articulating warehouse dock lights hanging from the ceiling also ring authentic.

However, the particle-board walls, cement floors, prison-grey color scheme and fake graffiti make the place feel like a movie-set design mash-up from “Colors,” “New Jack City” and “Boyz in the Hood.” While chowing down on an Asian meatball sandwich, you almost expect Robert Duvall and Sean Penn to smash through the door while collaring a cracked-out Chris Rock and a dope-slinging LA Raiders-hat-wearing Ice Cube.

To reinforce Belly Shack’s street cred, you’ll also find some gritty shots of Bill Kim and his “crew” chillin’ out in various urban locales on the restaurant’s website, bellyshack.com. The one of the Belly Shack posse all wearing faded jeans shot in the Western Blue Line CTA Station looks like an outtake from the lost Abercrombie and Fitch Urban Collection catalog. In another shot, an indie-band-style glossy promo shot of the kitchen crew hanging out near a graffitied wall, Kim maintains his deep cool calm stare, despite the fact that some dude is about to do a kick-flip ollie on his head with a skateboard. Hey, I’m all about tongue-in-cheek fun, but the Chipotle: Grand Theft Auto San Andreas Edition vibe seems too much like the contrived indulgence of an interior designer enamored with urban stereotypes. 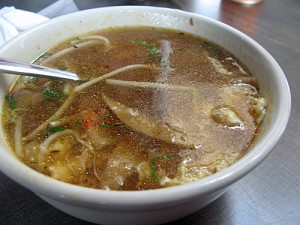 My disappointment over design details is especially sharp because I wholeheartedly love Kim’s food at Belly Shack. His “Hot and Sour” soup—featuring rich corn perfume, mineral-tinged chunks of hominy, silken shards of chicken and a successful game of brinksmanship with the cumin and salt shakers—is more layered and deeper than any bowl of pozole I’ve ever had. The soulful soup is almost enough to elevate Kim into a Rick Bayless-like level in the pantheon of honorary-Latino cooks.

The Kogi plate featuring thinly sliced red-chili-paste-coated thin shavings of rich beef is paired with a delicate, nuanced garden-fresh kimchi that I prefer to the smack-you-over-the-head fizzy fermented mouth-searing chili-infused versions that you find in your average Korean market.

While the Boricua, the aforementioned jibarito, or fried plantains stuffed with toothsome organic rice (so creamy I thought it was Arborio risotto-style rice at first) and marinated tofu is one of the more delightful local vegetarian dishes I haven’t eaten at Shawn McClain’s Green Zebra. You got to eat it fast, though, as the rice and tofu exudes a goopy sauce that sogs down the plantains.

The marriage of Korean and Puerto Rican elements at Belly Shack, a reflection and product of Kim’s marriage to his Puerto Rican wife, is so effective, I’d love to take Keith Bardwell, the Louisiana justice of the peace who recently refused to marry a mixed-race couple because, as he said, “I just don’t believe in mixing the races that way,” here. After one slurp of the hot and sour soup, I’m pretty sure he might just change his mind about such matters.