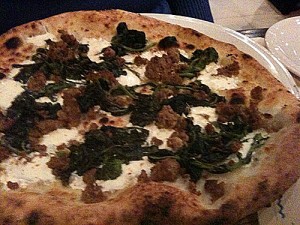 Nella Pizzeria Napoletana supposedly moved Mt. Vesuvius to make your pizza. Or at least they had a few tons of volcanic brick trucked in from the mountain to build their pizza oven. I don’t know if there’s something in the volcanic ash, a sort off pizza terroir that wafts in to the crust, but it was important enough that chef/owner Nella Grassano wouldn’t settle for using the wood-burning oven sitting in her partner Scott Harris’ (Mia Francesca) basement to make her pizza. Likewise, the mozzarella di bufala and other ingredients she uses are imported from Naples regularly. Considering all that attention to detail, I’m having a hard time understanding why no one’s paying attention to the most important thing: the flavor and quality of the food coming out of the kitchen.

Why serve a caprese salad in the middle of November? The cherry tomatoes here aren’t bad, but they’re not as prime as an early September heirloom Green Zebra dripping over your chin. Why not sub in a charcuterie plate instead? To serve caprese salad out of season signals that a restaurant is more interested in its bottom line than feeding people well.

I get the fact that Nella is an Italian pizza place, that people have certain expectations, but why bow to those expectations? Many of those same people also want a deep-dish pie loaded with four pounds of cheese and two pounds of sausage too, but Nella has no problem trying to change peoples minds by serving up a double-zero-fine-durum-flour-crusted pizza lightly dressed and fired fast in withering heat, something before the emergence of Spacca Napoli, Grassano’s old employer, no one in Chicago really thought much about.

Of course, maybe that’s the problem: the Nella folks aren’t thinking, they’re just recreating the Spacca Napoli experience Vesuvian brick by Vesuvian brick. The antipasti menu is virtually the same, though Spacca Napoli doesn’t serve calamari. Maybe that’s because you risk the cliché of overcooking it, which Nella does. Though the basic chili-infused tomato dipping sauce served alongside the calamari is perky and interesting, drenching the nicely coated but rubbery seafood only makes it taste like a Goodyear tire alla diavola.

Another dish that both Spacca and Nella serve is the Salmone Marinato. I prefer the version at Nella which has a firmer white-balsamic-cured body girded with tangy capers and a nice garlicky punch. Though it’s dressed with more oil than a Sports Illustrated swimsuit cover model, it was the best thing I ate.

Better than the pizza? Yep. It might seem disingenuous to bag on having tomatoes in a caprese salad out of season, but allow for tomato sauce on a pizza. However, you can make pretty good sauce from high-quality tomatoes harvested and canned at the peak of their ripeness almost any time of year, and the base sauce on Nella’s pizza is pretty good, but that’s where the excitement ends.

On two separate visits the entire crust on four different pies was limper than an overweight octogenarian who forgot to fulfill his Viagra prescription. But that’s what Neapolitan pizza crust is supposed to be like, you protest. In the center, yes, but the perfect specimen is a study in contrasts of blistered, bubbling, high-rising, crispy edges and a drippy center, or at least that’s what I liked about Spacca Napoli, or even the counterfeit knockoffs at Wicker Park’s Tocco. Then again Spacca Napoli’s pies have also had performance anxiety from time to time.

My guess, having never cooked in a wood-burning oven, is that it’s a thin margin between incinerated and underdone. With underdone, though, all you’re left with is an unsatisfying bubblegum chew, which means that there’s still half an uneaten pie in my refrigerator from three days ago, which is saying a lot since cold pizza in this house is lucky to make it past the midnight snack, and is always surely gone at breakfast.

Toppings vary in their quality. The imported cheese is creamy and the sausage has a good rustic body and nostiril-pleasing fennel essence. The mushrooms, however, which are pre-cooked (you can see the entire prep table thanks to a mirror mounted over the dining room that allows you to see the pizzas being made), glisten with moisture in their stainless-steel holding tubs and are sweaty when they arrive on a cooked pie. Rapini, which is bitterer than Alec Baldwin after his divorce from Kim Basinger, had a skunky weed-like funk. I thought maybe they’d pan roasted it before putting it on the pizza, so I asked my server how it was prepared. She responded, “Why, is it bitter? It was super bitter last week, but we thought we fixed it.”

While I clearly didn’t love my meals here, I like to make a distinction between places that just don’t care and never will and those that are making mistakes I think they genuinely would like to fix. I get the feeling from Nella’s reign at Spacca Napoli and her attention to setting up the joint she does care. There are some fun photos of Nella’s partners covered in flour near the kitchen that demonstrate, at least on the surface, that pizzeria isn’t some food factory. But now it’s time to stop horsing around and start playing for real.