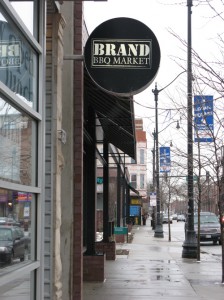 Sometimes I wonder if anyone’s been shot over a piece of brisket. I knew that if you served the wrong type of sauce or rub on a rib in the wrong part of a country, you risked starting a war. But, I didn’t know just how hardcore the BBQ crowd could be until a few weeks ago when, as Chicago correspondent for SeriousEats.com, I declared that Chicago BBQ was better than Memphis BBQ. Commenters responding to my story impeached my sanity and my city (referring to Chicago as Podunk). These are the same folks who call fall-of-the-bone meat “baby food,” or baked ribs “pork jello” and who start nasty rumors about places with automated smokers. Tiger Woods probably has a better shot at reconciling with his wife than any potential restaurateur does pleasing the BBQ illuminati.

And sure enough, even before Brand BBQ Market opened in Logan Square six weeks ago, the BBQ vanguard were already debating Brand’s definition of burnt ends and making fun of their smoked tofu offering. Smoke groupies started asking about Brand’s specific cooking temperatures, times and equipment (Cook Shack smoker filled with apple and cherry wood) before the first timbers had ever been stoked. The whole thing felt like a bunch of “Star Wars” groupies debating what kind of metal to use when recreating Princess Leia’s Jedi-era bikini. Although, having just discovered the website leiasmetalbikini.com which sports the tag line “What happens in Jabba’s palace stays in Jabba’s Palace” (unless you work at a comic-book store, the bikini galleries may not be safe for work), I think I’ll cast my lot with the BBQ crowd.

Despite poking fun, I can appreciate the staunch guardianship of tradition. Certainly it raises standards and ensures that anyone who wants to smoke meat for a living put a little skin in the game and thus we all hopefully get better food. However, I think such nitpicking also intimidates those who might otherwise practice the smoky arts and robs us of BBQ innovation. 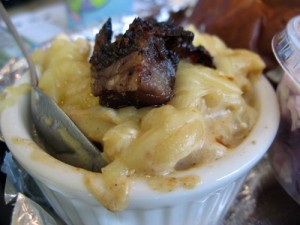 Consider those burnt-ends, traditionally the fatty smaller ends or points of a piece of beef brisket that are transformed by heat and smoke into a carbonized yet molasses-covered bit of beef candy. Legendary New Yorker scribe Calvin Trillin, a man who knows food like Ken Jennings knows trivia, and who eats heaping plates of burnt ends, once suggested that the original Arthur Bryant’s (thought to be the originator of burnt ends) in Kansas City was “possibly the single best restaurant in the world.”

Unlike the single-smoking Bryant’s, Brand double-smokes their burnt ends and then deep fries and smothers the top of their mac-and-cheese with them. What you’re left with is sort of a sweet beef bacon-like hunk of crispy skin and melty fat—a stark, and for me preferable, textural contrast to the traditional chewier burnt end.

Brand also circumvents tradition with one of its pit-masters, or I should say pit-mistress, Charity Smith, a Cooking and Hospitality Institute of Chicago culinary grad and veteran of the Stanley’s Kitchen and Tap restaurant group. While the BBQ world isn’t quite the Augusta National Golf Club, it’s still dominated by a coterie of men, often of the trucker-hat-wearing Santa-bearded-and-bellied variety. Smith, on the other hand, with her sharp air-slicing ponytail, mischievous Tina Fey-like eye glint and dark-rimmed librarian glasses, would have been a prime candidate for Van Halen’s “Hot for Teacher” video.

She may look like a bottled-up minx, but she’s a vicious carnivore. When I ask her about her cooking philosophy, she declares, “I love fat. I love meat. The fattier the brisket, the better.” I’m not sure she thinks I’m convinced, so after a beat of silence she reiterates, “I love fat, meat and more fat.” After I bite into a melting hunk of pork-belly confit kissed with smoke and sporting a golden glinting pane of crispy skin drizzled with maple mayo, there’s no doubt. 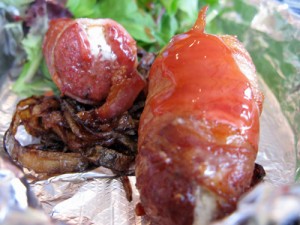 However, if you need more convincing, consider that Smith also invented the “Brandcheesie,” a well-endowed venison sausage stuffed with sweet, pungent, oozy gorgonzola-wrapped in crispy bacon, swaddled in fried onions and drizzled with brandy cherry bbq sauce. It’s unfortunate Brand is only open until 10pm, because I’d really like to be ending a lot more drunken nights indulging in this, the most glorious hangover helper since deep-fried Twinkies at the old Swank Franks.

Pulled duck. while not as cholesterol-level threatening as the venison sausage, is lusciously moist and lightly touched with smoke, a nice move that allows the touch of pleasant wild meat flavor to shine. Balking bubbas will certainly bemoan the mild brisket showing a bare whiff of smoke. Likewise, a couple of tough ribs had me humming Otis Redding’s “Try a Little Tenderness.” But, whatever lack in pure traditional BBQ Brand may have, they more than make up for it with tasty innovation.

On the one hand, sure, people can make whatever, and I liked the Brandcheesie an awful lot, and the proof is in the results. On the other hand, if you’re going to take bits of smoked meat and deep-fry them and call them “burnt ends,” then you have just lost the word that describes a very specific treat at a place like Arthur Bryant’s, and you’re on the slippery slope toward Family Packs of All-Beef Frozen Burnt Nd-Lets at Costco.

hmm, the chef and the owner both swore that those burnt ends never met a deep fryer. You heard differently?

also, love the “Balking bubbas” line, though I might suggest taking the alliteration further:

Chef here…I would like to clarify that our Burnt Ends have never hit a deep fryer. The topping on our Mac are burnt ends that we crisp in the broiler. We have also added a Burnt End Sandwich to our lunch menu which I hope would satisfy the craving for Burnt Ends. We double smoke the point in our Classic sauce then toss in your choice of sauce and serve it on a hoagie roll. I am sorry for the confusion but I hope this clears it up. Happy New Year!