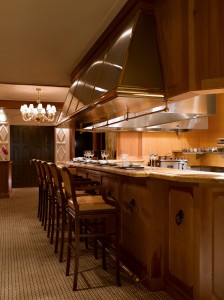 Since 2000, Chicago has gone from being a Rat Pack-worthy steak-and-potato-slinging stereotype to a destination for international culinary travelers. Chicago’s affordability, its diners’ willingness to suspend disbelief and its proximity to the sublime bounty of the Midwest all play a role in that transformation. Most important to the renaissance are the places that put everything together to inspire our collective culinary imagination, the best restaurants that opened in Chicago this decade.

Alinea
The history of cuisine was written in the kitchens of millions of chefs, but we only remember a few by name, guys like Escoffier, Careme and Robuchon. There are probably only three Chicago chefs, as of now, who have a shot at making that list: Jean Banchet, Charlie Trotter and Grant Achatz. Though Achatz started making a name for himself at Trio, Alinea was the game changer, the restaurant where every aspect of dining from menus and silverware to the wine service and emotional content of the food was reimagined.

Avec
Love it or hate it, this was ground zero for what is now today’s communal table free-for-all. More importantly, Avec was the place that launched a thousand salumi, the fringe of Chicago’s now-burgeoning charcuterie movement. Koren Grieveson’s restrained soulful style is still the late-night hang of choice for chefs.

Avenues
You probably don’t remember Gerhard Doll or David Hayden, the chef-stewards who drove the good ship Avenues through a successful seafood-driven era, but there’s no doubt you won’t forget the Pop Rock and foie-lollipop fantasia, the convenience-store chic of Graham Elliot Bowles. Without Bowles’ whimsical, accessible style, the emotional roller coaster of Grant Achatz’s cooking and the theater at Homaro Cantu’s Moto likely wouldn’t have quite captured the nation’s imagination, nor garnered Chicago cuisine the countless magazine features it received mid-decade. Today, Curtis Duffy, the culinary love child of Achatz, Thomas Keller and Alice Waters, is executing some of the most exciting cuisine Chicago has to offer.

Chilpancingo
In 2000, most people thought mole was that cute mark on Cindy Crawford’s face, not the layered earthy Oaxacan traditional sauces that Geno Bahena introduced a whole generation to at this River West spot. Sadly, because he sells his name to every new Mexican spot in town as a consultant, you can’t really count on the Bahena name anymore. But, thanks to the road he paved, you can score great mole at a lot of local spots today including his brother-in-law’s Sol de Mexico. 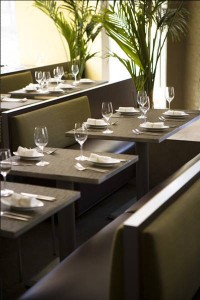 The temptation is to go with Spring, the first of Shawn McClain and Sue and Peter Drohomyrecky’s restaurants (also Custom House) and where Top Chef Stephanie Izard once worked. But, until Jill Barron’s Mana opened, Green Zebra was really the only restaurant of its kind, a meat-substitute-eschewing vegetable-focused gourmet restaurant that delighted carnivores and vegans alike.

L20
Chef Laurent Gras reminds me of “Rocky IV” villain Ivan Drago. He’s ruthless, a tireless worker and insanely precise. After recovering from a bicycle accident that shattered a bunch of bones and punctured a lung last year, he’s also seemingly indestructible. However his robotic technical prowess and attention to detail yields some of the most breathtaking innovative seafood dishes anywhere, including those found at seafood superpower Le Bernadin. 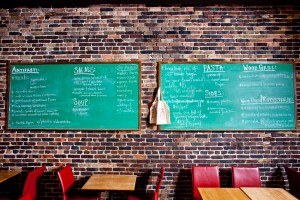 Mado
Head-to-tail dishes are all the rage, but the truth is most places serve maybe one or two courses of the stuff. Who can blame ‘em? You gotta stay in business, and though the dining public is more accepting, it’s not quite chucking back bull’s testicles like popcorn, yet. Chef Rob Levitt somehow didn’t get the memo and so he serves whatever odd parts he damn feels like. Along with his wife Allison, they’ve created one of the most soulful BYOB places around.

Matsumoto
This restaurant closed over three years ago, but only because it was ahead of it’s time. Maybe it was the chilled monkfish liver or sea urchin with quail egg yolk, but Chicago just wasn’t ready for Chef Seijero Matsumoto’s exquisite, authentic, seasonal Japanese kaiseki experience. Drop Matsumoto in Manhattan with the right investor and he’d have a go at Masa Takayama. The good news is he’s back at Mizu Yakitori in Old Town and will prepare kaiseki for a minimum of six people with five days advance reservations. So grab your friends and don’t miss out in the next decade.

Mercat a la Planxa
Iron Chef Jose Garces may live in Philly, but the Chicago native can be a culinary carpetbagger anytime he wants. Though places like Ba Ba Reeba, Emilio’s and Café Iberico serve decent food, this was the first tapas spot I wasn’t depending in some part on syrupy sangria and the comfort of a big group of friends to make the night unforgettable. Honorable mention in the Spanish arena would go to Del Toro, though it’s now closed and wasn’t really a tapas spot, as much as it was a deep-fried chickpea-serving, house-cured blood-sausage-and-bacon-curing proving ground for top chefs Andrew Zimmerman (Sepia) and Rob Levitt.

Moto
With chefs as waiters, laser-burned vanilla beans and edible menus, this was the first place to successfully execute dinner as edible performance art. Homaro Cantu and his partner-in-crime pastry chef Ben Roche make their hero Salvador Dali proud. Dali was famous for saying “The only difference between me and a madman is that I am not mad.” I’m still not sure the same can be said for Cantu and Roche.

Naha
Chef Carrie Nahabedian’s neighbor across Clark street, Rick Bayless, demonstrated that you could successfully reintroduce diners to an authentic luxury version of once marginalized and diluted ethnic cuisine. However, we all had tacos as a reference point, while merging southern California sensibility with pre-communist Armenian culinary history was a little trickier. Eight years later, it’s still one of the few places in the city I could eat at every night.

NoMI
This was one of the first spots outside of Charlie Trotter’s that didn’t define luxury as old-school French or lobster tails as big as a whale. Opening chef Sandro Gamba offered a Michelin-star level of quality that attracted European foodies. The tradition continues today under Christophe David and sommelier Fernando Beteta. 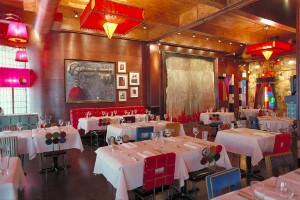 I hesitate to include this spot, because it really doesn’t stand the test of time, but when Paul Wildermuth was at the helm this was my favorite jewel in the Jerry Kleiner empire. While it never really reached the ideal of celebrating authentic regional Chinese food, it was one of the most successful interesting upscale versions of Chinese food in the city.

Publican
Though this is not a best-beer-lists-of-the-decade piece, the Publican is the most important beer spot to open in the city since Hopleaf back in 1992. The Publican also boasts the city’s first beer sommelier in Michael McAvena and his stewardship has been impeccable. Likewise Brian Huston’s cuisine, including cider-glazed pork rinds or foie gras-topped deep-fried French toast, is precisely the kind of thing you’d like to eat at three in the morning when you’re raving drunk and you have access to a top chef.

Riccardo Trattoria
There may be a red-sauce joint on every corner, but half of them are slinging lesser fare than the Olive Garden and relying on fake stories about Nonna or Momma’s recipes. And certainly none of them are ballsy enough to service tripe (veal stomach) Florentine. This is likely the best neighborhood Italian restaurant in the city.

Schwa
In his own parlance, chef Michael Carlson is one talented cat. He’s also operates like the love child of Johnny Rotten and Ferran Adria, and is probably the most idiosyncratic restaurateur on the planet (Jerry Kleiner, who I once interviewed while he wore a sweatsuit and white snakeskin boots, is a very close second). Carlson closes when he wants, answers the reservation line when he wants, and might just swap out your bottle of BYO wine for another bottle in his private restaurant stash to provide a more suitable pairing with your course. He’s also the only dude who makes sea urchin ice cream in pine-flavored ice-cream cones that will blow your mind.

Vie
With his commitment to canning, preserving and sausage making, Chef Paul Virant is the modern manifestation of Ma and Pa Ingalls from the Little House books. No word on whether he makes his own candles or soap, but one thing’s for sure, this is probably the only suburban fine-dining restaurant most people leave the city to eat at.

West Town Tavern
This is the Ferrari of neighborhood restaurants, a friendly high-quality value-conscious hang from talented restaurant folks opened in a time when very few places like this existed. It’s the precursor for spots like The Bristol, Mado and David Carrier’s promising new spot in Lincoln Park, Kith and Kin. Chef Susan Goss whips up heartwarming classics like crispy duck confit and beer cheese, while her husband, Drew Goss operates one of the best affordable by-the-glass wine programs in the city.

Xoco
Lots of chefs say they’re focused on serving seasonal and local inputs, but what they really mean is they buy one box of greens at the farmer’s market and mix that with stuff from commercial vendors. Bayless serves 750 or so people a day at this, his new street-food outpost, and almost every single ingredient he offers is local, artisanal and/or consciously grown. His volume and his dedication to local farms created jobs and a market for well-raised food that didn’t exist before 1990. The quality of the bread alone (though we sure don’t mind the wood-fired in-house-butchered achiote-rubbed suckling pig that comes with it) is worth the price of the sandwich.