by Brian Hieggelke
January 12, 2010Filed under: 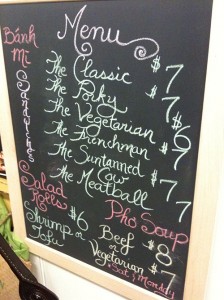 I’m trying to imagine Mayor Daley making out with a supermodel. Thankfully I’m not really spending much time thinking about his sputtering sweating visage as much as imagining what kind of daddy issues a supermodel would really need to make that happen.

Though I’m sure he dreams of dripping Italian-beef gravy on Carla Bruni’s naked body, Daley is no Nicolas Sarkozy. However, he did finally realize a bit of the French dream when he allocated eight million of his secret-slush-fund, err, I mean tax-increment-financing dollars, to open Chicago’s burgeoning French Market in the west part of the Ogilvie Transportation Center on December 3.

Finally, clout we can believe in. Well, sort of. Though the market’s six weeks old, for most of the last month, many of the stands weren’t at full operation, and some had yet to open. You’d think Daley would be hoisting a glass of Old Style in celebration, but as of last week Frietkoten’s beer taps were still empty since they haven’t received their liquor license. (They must have donated too much to aldermanic thorns in Daley’s side like Bob Fioretti, Brendan Reilly and Scott Waguespack.)

On my first few visits the whole thing felt a little half-baked, like I imagine the whole idea of this thing went down in the first place: I see Mayor Daley on some European tour getting shuttled around in a private double-decker bus by the East End equivalent of the Chevy Chase character in “European Vacation” saying “Oy, ‘ere’s Big Ben, Parliament.” Eventually the whole trip ends up in Paris at the Marché d’Aligre with pan au chocolat dripping from Daley’s craw and him saying, “We gotta get us one of dem markets back in Chicawgo.”

But, lest I sound ungrateful, I’m all for anything that dispels the myth that Chicago’s all about deep-dish-pizza-slurping, hotdog-guzzling fatties committed to Cheez Whiz, green can parmesan and over-oxygenated bloody-red deli-counter meats. This new market is a step in the right direction, and has increased the quality lunch options tenfold in the food desert that is the eastern part of the West Loop.

I do wish the whole affair was regulated with some of the discipline of the Green City Market which allows only sustainable producers. Right now there are about five too many bakeries and far too much congealed steam-table fare (here’s looking at you Bowl Square). The charcuterie and fresh meats on offer are also a bit anemic, and prices overall skew in to the movie-theater-popcorn-gouging range, but there are still plenty of great food finds. Here are my favorites: 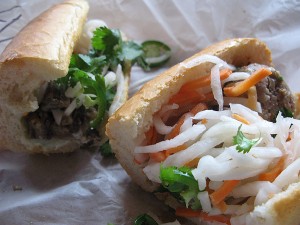 Saigon Sisters
Speaking of gouging, charging $7 for a banh mi when pretty much every other spot in town charges $3 is pretty gutsy. However, the quality of the meats here from duck confit to braised Duroc pork belly isn’t exactly your average Vietnamese Spam-like pate, and you generally get what you pay for, except for the gristly rubbery overcooked short rib on the “Suntanned Cow” banh mi. My favorite is the luscious pork meatball sandwich, bursting with basil, scallion and ginger pungency, sort of what might happen if D’Amato’s and Nhu Lan bakery had a culinary love child. 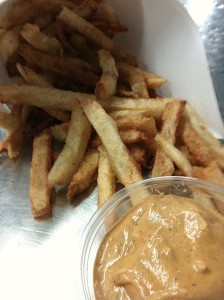 Frietkoten
I’d almost consider moving to the far west suburbs just so I could take a cone of these spuds on the Metra with me every night. Though they’re not the best I’ve ever had, maybe because they’re only fried in pedestrian Canola, they’re cooked to order, well seasoned and perfect for the connoisseur who loves a touch of crunch and a lot of snowy light potato fluff inside their fries. The curry mayo dipping sauce is a good accompaniment.

Vanille Patisserie
There might be ten baked-good spots in the new French Market, but only Vanille would probably survive in a real Parisian market. Vanille is easily one of the top three patisseries in Chicago, and their pistachio macarons, mille-feuille and lemon curd tarts prove it.

Pastoral Artisan
One of the best cheese mongers in the city, it’s also one of the market’s best sandwich makers. Don’t miss the B.L.T.A featuring house-made Prosciutto bacon with avocado, tomato, mayo and greens. 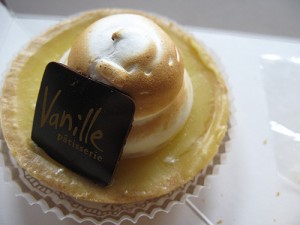 Flip Crepes
While digging in to the Banatella, or banana, Nutella, and rum-soaked raisin crepe here, I was utterly baffled as to how Häagen Dazs hasn’t made this one of their flagship ice cream flavors.