by Brian Hieggelke
January 26, 2010Filed under: 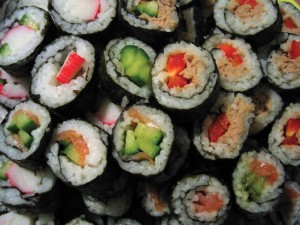 There are a lot of toddlers who were more sophisticated than me in 2002. After all this was the decade where fat little Gap-clad cherubs named Holden or Zoe swaddled in architecturally significant strollers pushed by their progressive parents went from mother’s milk to maki in seconds flat. I, raised on La Choy chow mein and almond boneless chicken, made it to my mid-twenties without ever eating raw fish.

Back then “toro” was a lawnmower manufacturer or a bullfighter’s cry, not the silky fatty foie-like tuna I’ve come to covet like scantily clad pictures of Scarlett Johansson (for their art value of course). That all changed in the fall of 2002 thanks to a wicked hangover.

Some things are immutable. You die. You pay taxes. If you’re a Michigan football fan, you tailgate in six inches of mud in the driving rain or bundle up for a God-given pimp slap of a blizzard if you are somehow privileged to score tickets to the year-end Ohio State game, even if it takes place in the urban-planning disaster that is Columbus.

And, as in the fall of 2002, if both teams have a shot at the Big Ten championship, and Michigan has a chance to spoil the Buckeyes’ undefeated season and potential national championship, you certainly do not sell those tickets. In fact, if you have extras you hoard them so you can procure a seat for your warm thermos of hot chocolate.

But, when hours before the game you’re in so much pain from drinking with your old college buddy the night before that you can’t get out of bed, and you’re $20,000 in hock for school loans and a year out of college making almost nothing and some dude is offering you $400 a ticket, bitterness, greed and confusion conspire against you.

I can’t say I’d ever had four Ben Franklins in my pocket before, or really ever again. But they do burn the proverbial hole once they’re there, and the surest cure for a hangover is massive amounts of food. Flush, that means fancy food, and somehow this time the Awesome Blossom at Outback Steakhouse wasn’t going to cut it.

I do not remember how we ended up at a Columbus sushi bar, but that’s probably because anyone who remembers that game knows that before the armed robberies and before he started blogging from prison, Ohio State freshman Maurice Clarett lit the Maize and Blue up for a couple of game-winning touchdowns. Likely, I’d somehow fought through my hangover pain and started chugging bourbon after hearing the Ohio State band break in to their four-hundredth rendition of “Hang on Sloopy” to combat my misery.

As sushi neophytes, we did not know that maki rolls were five pieces, nor that the nigiri came in multiples, and so we ordered at least two of everything, four if we thought we’d really like it, and ended up with a sumo-wrestler-sized portion of fish. We also drowned our fake wasabi in soy sauce and committed treasonous acts with our wooden chopsticks, maybe explaining why our sushi chef kept scowling and shaking his glinting cleaver at us.

We did however have some honor, and no fish would give its life in vain. We polished off all, about $150 dollars worth, of the sushi. It was an easy feat, for I was smitten by the form and, frankly, the chef had me at unagi.

It’s a short distance between clueless and choosey, and these days I’m a sushi snob. Recently, with my favorite sushi chef BK Park out at Aria Bar (coming soon to Arami, 1829 West Chicago Avenue in March) and my favorite joint, Kaze, closed, I was adrift, a man with out kampachi. Then along came Macku, the new sushi boutique from the Kaze dudes, aka brothers Kaze, Macku and Hari Chan.

Outside of certain dishes at L20, the signature sashimi and nigiri, forward-thinking lightly cured modern composed plates of raw or lightly cured fish are the best in Chicago.

In fact, if you dropped Macku’s demitasse of king crab-filled carrot soup fired up with Chinese seven spice and topped with whip cream and a rice crisp redolent with coconut perfume in the French Laundry tasting menu, no one would consider it out of place.

Asparagus panna-cotta with strawberry puree, Hennessey cognac cream and chocolate syrup, which could easily be a dish invented by Schwa’s Michael Carlson during a drug-fueled bender, redeems the Asian reputation for serving horrible desserts.

While Michigan has lost all but one of their gridiron meetings with Ohio State since my first date with edamame and maguro in 2002, Macku looks to be a perennial winner.