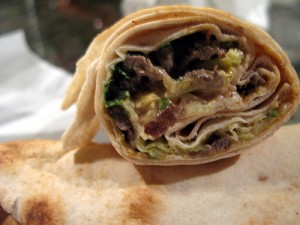 This is what you get (when you eat in the front seat of your car): a combined dry-cleaning and auto-interior-detailing bill that costs four times the price of the sandwich you just ate.

After the best-taco-al-pastor search of 2007, whereby I had to remove achiote paste stains from the front passenger-side carpet of my Ford Escape, the subsequent best-French-fry search, whereby my truck’s cabin wafted greasy McDonaldsesque potato fumes for a week, and then finally the best-pho quest, which ended up with me using a wet/dry vacuum to suck out star-anise-perfumed beef broth from the crevices of my center console, you think I woulda learned my lesson.

Of course, though my 3-year-old son just explored what almost all of the colors in the Crayola Fun Pack look like when you scribble them on the back of our white entry door, my wife claims she wants to give birth again.

And so, the great shawarma search of 2010 commenced with me dripping spicy, rusty-orange harissa-infused tahini sauce all over my button-down, my jeans and the cracks in the leather on my gray bucket seats. For those wondering, tahini is not a good natural sesame-paste alternative to Armor All.

Technically, since my recent jaunt only included a sampling of shawarma from two recently opened spots, Ameer Kabob in West Town and Zaytune in Bridgeport, it was actually more like the Near West and South Side shawarma search of 2010.

But this is still significant. For all the good shawarma, coincident with Jewish and Middle-Eastern population migration, seems to be north on Kedzie and Lawrence or near Devon, Salam and Taboun Grill being some of my favorites. Pita Inn in Skokie does alright too, but by that point you’re close enough for a burger and truffle fries over at Edzo’s in Evanston. Outside of Baba Pita, which has been nudging its entree prices skyward in the last couple of years, and the banker’s hours keeping Oasis Café in the Loop, the Near West and South Sides have generally been a shawarma desert.

Now, however, with the opening of these two new spots, we have what you might call a tiny oasis. Neither, however, is perfect. Ameer kabob, by virtue of the multiple misspellings and typos on its menu (entrée is spelled “entres,” “entre” and “entrée” for example) seems most promising. For in my experience, bad grammar equals good baba ghanouj. And as far as the shawarma goes, the fact that Ameer’s is fire-roasted on a traditional spinning spit and the sweet allspice-tinged charcoal flesh flares your nostrils with delight, it is the victor in this particular showdown.

Zaytune’s version, which resides in a rosemary, garlic and allspice marinade and is grilled, rather than spun and fire-roasted, is pretty decent, just not the victor. However, their house-made, springy, smoky, grill-marked, fresh-made lavash is superior to anything coming out of the plastic-wrapped bags at Ameer, and the flame-roasted tomato-based hot sauce (I saw the grill cook roasting off the tomatoes) is a much better Mexican-salsa like alternative to the ho-hum harissa served at most places.

Though this was a shawarma recon project, I do not shirk my responsibilities for collateral eats. The baba ghanouj at Ameer is righteous, devoid of eggplant slime, the key failure at many spots and, more importantly, sports a superior old-school-jazz-club-like smokiness.

I did not try the analog eggplant spread at Zaytune, but their cumin-and-coriander-infused mahogany-crusted fried falafel, whose interior color is coincident with the nuclear waste glow of Dekuyper Apple Pucker, was way better than the soggy Ameer version.

Both spots have satisfying lentil soups, though Zaytune’s receipt spells theirs “Lentill,” which brings up the memory of Emmet Till, not something you generally want to reflect on when dining out. Zaytune’s is beefy and army greenish with bitty chunks of meat. Those looking for a dalliance with dill will love the more Granny Smith-hued puree at Ameer. And after a slurp of it, for a minute there, I lost myself.

OK, the Radiohead references are cheesy but, whatever. However, Emmet Till? Really? Lentil soup reminds you of a victim of hate and violence? Are we going to compare food to the Holocaust next?

I didn’t compare food. I said that the spelling on the receipt had that memory association, and it did. As a student of Chicago history, as soon as I saw that spelling, it was the first thing I thought of. I’m sure that’s not the case for everybody, but it’s honest. That being said, I have all the respect for his sacrifice, and by mentioning his name, I don’t think it minimizes the incident. I think what happens is people will be like: who’s Emmet Till, and if they don’t know, they’ll Google it and learn an important piece of… Read more »

But how do you get tahini stains out of clothing?