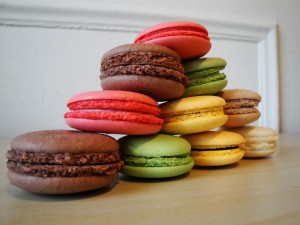 It’s hard to go somewhere within the city of Chicago and not run into a shop that sells cupcakes. In the last couple of years these tasty treats have been popping up in specialized bakeries, coffee shops and markets all over the city with a local domination to rival the Asian carp invasion. But a new pastry in town just may have what it takes to steal the cupcake crown.

Katharine Greis, the co-owner of Panna Dolce, an online pastry shop specializing in macarons, first discovered the delicate dessert while traveling abroad in Paris. She instantly fell in love with the confection at the popular French pastry shop Ladurée, or as she described it, the “homeland of macarons.” When she arrived back in Chicago, she started on a mad hunt for the European treats on the internet and throughout the city but there were no decent macarons to be found. “That’s where I got inspired,” she says. “I just made it my mission—I’m going to learn how to make these—and that was five or six years ago.”

Now Greis, like several other owners of macaron shops in Chicago, hopes to take these delicate French confections and popularize them among the same customers who spend their money on cupcakes. However, one slight speed bump that they’re running into is that many people do not know what a French macaron is.

Beth Jacob, the owner of Macaron Chicago, began selling her macarons at Logan Square Market last December and didn’t have many people approaching her in the beginning. “When it first started, people would walk by and go, ‘you spelled macaroon wrong,’” she says. Macaroon, with two o’s, is a soft coconut-flavored cookie popular in America that often gets confused with the French macaron with its single o. “I made it a point to ask [people] if they were familiar with French macarons,” Jacob says. “Ninety percent of the time they would say no.”

While education about macarons still needs to be done, a rise in local interest in the delicate dessert is noticeable. Elaine Heaney, co-owner of Fritz Pastry at 1408 W. Diversey, says that she has seen an increase in her store’s macaron sales. “I feel like there are people in Chicago who are catching on,” she says. “It’s so common that we now have these kids in Lakeview, anywhere from 3-years-old to high-school kids, coming in and ordering macarons. I mean, I don’t think that when I was that age I would walk into a bakery and be like, ‘I want a pistachio macaron.’”

Macarons also have the ability to be just as customizable as cupcakes. While many shops carry the classic flavors such as rose butter cream or caramel fleur de sel, customers can choose from many options, such as center filling or the color of the shells.

Some doubt the macaron could ever challenge the popularity of the cupcake, due to the complexity of the recipe. Don’t let the simple ingredients of a macaron mislead you; these temperamental little guys are difficult for even the most experienced pastry chefs to master. Greis, who spent nearly five years perfecting and playing with her recipe, says that there is a certain finesse to making a macaron and nearly anything can create a disaster.

“Let’s say you, by accident, are separating your egg whites and you get a touch of the yolk in there, they’re done,” she says. “Or, if you had just washed your hands and you dried them off but you got a few drops of water into your egg whites—done.”

Many would respond that it is precisely this delicate nature and long baking process that makes these desserts so luxurious and unique in the first place. “We offer high-quality products that are worth waiting for,” Greis says. “It’s not your typical pick-up of cookies. It’s a real special experience.”

People really have no idea how difficult it is to make these bad boys, I spent a good 3 months getting them just right. The slightest measurement snafu and its surely disaster with these little dessert treats, its not quite as easy as the everyday cupcake. I think the difficulty is worth it in the end though! Even bad macarons beat out the cupcake any day! Great article!

hmm. maybe i better go get me some macarons now! SOUNDS DELICIOUS : )