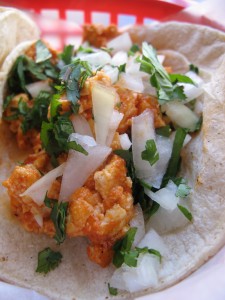 Johnny Cash was givin’ me the middle finger. So it goes at Lakeview’s Rockin’ Taco, where posters of rock gods, including a squinty eyed Bob Marley smoking a fatty blunt, an impossibly youthful Clash slumming in an alley, and a pissed-off Man in Black giving the big eff-you to the camera, hang near the cash register.

I thought it was a metaphor. I thought everything was.

After the Beatles vs. Stones, there is maybe no more prevalent turntable-side discussion than The Clash vs The Jam. And those who pick The Clash, at least to those born in America (for Brits have generally always derided The Jam as unserious popsters—probably spot on when you consider the Motownesque backbeat of a “Town Called Malice”) and subject to the overwhelming popularity of “Rock the Casbah,” are sometimes regarded as pop-swayed dilettantes. American Jam fans tend to be argumentative types who appreciate (or pretend to) their driving-though-less-hooky singles like “Eaton Rifles.” Those folks also tend to count the slightly greater post-Jam success of Paul Weller over Joe Strummer’s post-Clash career (far too much) as evidence of The Jam’s musical superiority. Of course, those who argue too vehemently about these things sometimes still live in their parent’s basements.

So, yes, of course, Rockin’ Taco with its dingy shiny head-shop-stereotype posters and cheesy big-screen-television-clad dining room was all about the friendlier Clash. I mean, c’mon, they serve hot dogs and tofu tacos. They have a special called the Friday Night Fight where if you polish off ten ghost pepper (hottest pepper in the world—check out the YouTube videos of people eating them to understand the decline of Western Civilization) hot-sauced tacos in an hour, with only one drink and one napkin to save you, you get a t-shirt, a picture on their wall and “eternal glory.” Hell, it wasn’t just Johnny Cash. The whole idea of this place was giving me the middle finger.

Having read about the rock theme and tofu and having imagined some late-night Jaeger-bombed-out Ed Hardy t-shirt-wearing dude vomiting on me, I decided to stop by Wicker Park’s Big Star for a couple tacos before heading over to Rockin’ Taco. One, I figured it would be good to get a baseline read from one of my favorite local, also loosely themed, taco joints—the theme being: how many dudes wearing 1993 New Trier High School tennis team t-shirts cribbed from Unique Thrift can we attract—and also to hedge my bets and make sure I was well fed if Rockin’ Taco didn’t work out.

It seemed like a no-brainer. Big Star, with its hand-patted freshly griddled tortillas, made by weathered Latino ladies and filled with luscious glistening fatty chunks of pork belly along with its oozy bubbling crocks of queso fundido, generally got me more revved up than a daydream about a naked Scarlett Johansson hand-feeding me maple-syrup-glazed foie gras wrapped in bacon in bed. 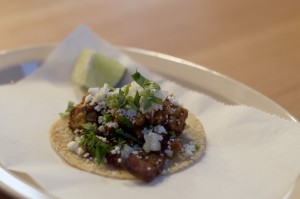 But, this time (which was no reflection of my previous experience), the panza (pork belly), the al pastor and the chivo (goat) tacos were lacking salt. Even the usually heavenly corn-perfumed tortillas were a tad dry. The thing about Big Star, however, is the thoughtful balance of ingredients, including the smoky sweet grilled pineapple tidbits in the pastor and the grill-singed bits of scallion, peppery and translucent rounds of radish girding the succulent sweet spiced goat go a long way. In this substandard state, Big Star could still put most taquerias in town out of business.

Though not,  it turns out, Rockin’ Taco.

Despite the lack of a spit, the tendril licks of the grill flame at Rockin’ Taco yielded a well-salted al pastor that was succulent and nicely charred. The beef on their taco asada however was a dry chewy mess, probably from spending too much time in the unforgiving acid of a papaya marinade. All was redeemed with the tofu taco, marinated in al pastor spices and tinged with a tangy pineapple zing as satisfying as the similar accompaniment on Big Star’s regular al-pastor. The creamy bits of spicy tofu aped a fresh Indian-style paneer, and after a few bites, I was convinced it was the best taco I’d had all week. Flautas, especially the crispy fried-cheddar-potato-stuffed ones which reminded me of my Polish grandmother’s excellent pierogi filling were also pretty addictive. Almost as delightful as the food was owner Robert Vojnovich working the room, busing tables, and making sure everyone’s having a good time.

Paul Kahan–executive chef and partner in Big Star is so damn big and so well-loved these days, he and Big Star are very much the taqueria equivalent of the Clash. His past ventures Blackbird, Avec and The Publican are like “London Calling”-sized restaurant hits, regarded, certainly for quality, but also for their accessible populist ways.

Just as I have always been more of a Clash-loving Strummerian, Kahan will likely always be one of my favorite chefs. I don’t know if Rockin’ Taco’s big enough, or ever will be, to serve as a taqueria analog to The Jam. But their tofu al pastor, for me, was like the perfect pop song, the taco equivalent of the jangly George Harrisonesque acoustic work on The Jam’s “That’s Entertainment.” And, by that standard, at least for one afternoon, I guess that makes me a Wellerian.