Editor’s Note: This is a  part of a package of stories about the state of criticism. See the links at the end for the related stories. 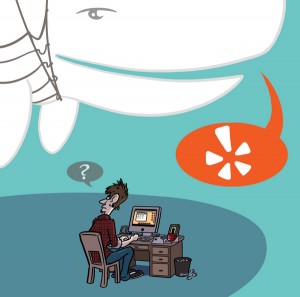 A man without a country may die wistful, pining for a homeland. But he might also rejoice that he’s boundless, tethered to no cheap allegiances, and thus able to operate freer than most. Having come up as a journalist in the last four years, launching a career via the internet and now finding myself working often for the print establishment, I very much see myself as such a man. I do not revile Yelp, but I also do not have any nostalgia for the old-time newsroom.

So much of the establishment’s criticism of Yelp and its ilk has been one long apologist rant. Newspaper columnists and editorial pages deriding the rise of citizen or social media-based criticism sounded like a grandfather telling his grandson he walked uphill both ways to and from school every day ducking gunfire and a blinding rainstorm. And gosh darn it, he liked it.

Grandpa hated the old way, he got a bad case of arthritis because of it, and his life expectancy is much shorter. If he’d really been smart, he would have packed an AK-47, an umbrella and found a shortcut home.

Old media does not take enough credit for its own failure. Instead of investing in content and valuing those who really created it (reporters, writers and low-level editors), they created top-heavy editorial hierarchies. Two years ago, if I wrote a freelance piece for a big paper or magazine, that piece would have gone through a sub-editor, an editor, an executive editor, a fact checker and a copy editor. Having gone through the sub-editor or editor, and fact checker, I was usually happy with the piece, felt it retained my intent and still had an original voice. By the time it went through the rest of the process, anyone could have written and reported it, and it was so boring, I’d wished print journalism, like the film industry, had an Alan Smithee clause.

And that was on a good day. Because an editorial gig was more lucrative than writing, many writers, though they wanted to stay writers, ended up taking the promotion anyway. They never lost the desire to write, and often did so through their editing, and thus as with too many cooks spoiling the broth, your editor became one more writer mucking up the piece. Even if they didn’t harbor a secret ambition to continue writing, so concerned with preserving their high-paying jobs or forced by a corporate management structure to hew to a sense of some standard readership, which despite focus-group and scientific studies did not likely exist, editors muzzled voices and wrangled journalists through line-editing, cost-cutting etc. into an unnatural collective voice.

Then again, the failure of the establishment to captivate readers might reside with the writers themselves. Maybe there are only a few Roger Eberts, Christopher Hitchenses or Ruth Reichls in the world and everyone else is filler. However, I’ve seen a lot of talented writers get bogged down in the micro-management of big media organizations and eventually stop fighting for their right to be original and engaging.

In some cases, good writers just got lazy. A longtime food writer like Pat Bruno of the Sun-Times once an intrepid dude ferreting out emerging regional Mexican and Thai spots on the edge of town, now only engages in cheap adjectives and blow-by-blow plate-by-plate breakdowns of his restaurant visits. He spends much of his time, as many establishment critics do, browbeating the reader intellectually (talking of his trips to Europe and how domestic foods could never compare to those he’d had abroad, for example) and reminding them of his power and expense account and position.

I hesitate to bring up the example of Raymond Sokolov, the Wall Street Journal critic who recently left the paper because they eliminated his position, as his talent and his hard work make Bruno look like the very worst Yelper. However, as good as he was, in the last few years even he’d used his prominence and budget to take on sweetheart topics like, say, looking for America’s best hotdog or hamburger, pieces that have been written a thousand times and thus fail to capture the collective imagination. If such a piece captivates, it’s in the argument that a reporter trying to find such a thing often overlooks some real contenders. In Sokolov’s case, his investigation of Chicago’s dog offerings basically consisted of calling Charlie Trotter and asking him his favorite hotdog stands in Chicago. Trotter had some good suggestions, but the move was sloppy and deferential.

One thing Sokolov didn’t forget was to tell a good story, and by that virtue alone, he will be missed. Maybe more than anything, many establishment critics somehow seemed like they thought they’d been absolved of the responsibility to captivate. When establishment writers stopped telling stories as a professional class, they offered very little competitive value, and consumers lost interest or didn’t differentiate between the establishment and a citizen journalism instrument. “This American Life” has proven that if you tell a good story you can talk about health-care politics, credit-default swaps or belly lint and people will listen. Heck, because Yelp is generally an unfettered Wild West, though its critical reviews may be questionable for their fairness or ethical righteousness, they often were entertaining.

That’s not to say Yelp’s rise doesn’t have negative ramifications for our culture. I generally agree with what my editor has written here. But I came up through the internet as a participant on lthforum.com and also by creating hungrymag.com, rather than trying to earn my way through the establishment, because I saw it didn’t work very well anymore. As such I probably have a lot more faith in the marketplace for internet criticism than other establishment print journalists. But, I also believe in the market in general. If Yelp is truly dealing in unfair practices, the lawsuits filed against it will bring it down. A person who drops two-hundred bucks on a meal because Yelp said it was four stars, and finds it’s not even two-stars, will eventually stop reading.

I also believe the establishment will identify where real opportunity lies: identifying those smart interesting folks that came up through the new internet-based short-form venues and rewarding those people with the opportunity to shout their voices in a more greatly nuanced, ethically measured long form.

I think that readers will make more distinctions between bad and good sources. There is truly a blinding rain storm of content out there, and so it’s tougher for an unknown to break through or for a consumer to know where to turn. However, I think Ebert’s success on Twitter and his website is as much about his prior capital as a smart successful talent, as it is also about people getting tired of the garbage out there and turning to quality once again.

I say this as a writer who straddles both internet and print and struggles to make a living solely as a journalist. I genuinely believe I’ve worked as hard as anyone (averaging twenty-five articles a month, whereas a very active staff journo might write twelve pieces in the same period) and I also believe I have a fair bit of talent. I’m not measuring my talent so much by my own estimation (‘cause we’re all great in our own minds), but in that I’ve written for almost everyone in Chicago and continue to do so regularly. It’s possible I just suck or I haven’t done enough to market myself. But, I really believe a large part of my struggle is a function of the tension between new and old models, the loss of lucrative advertising in the establishment and the reluctance of such advertisers to spend the same money on internet-related advertising. Though I want nothing more than to do this full time, I’ve recently taken on a non-journalistic consulting side gig to pay the bills.

The way it was never will be again. And the way it is won’t be that way for long. I wish it was four years from now and we’d figured things out and I was making a living solely through writing. Maybe it’ll take a decade, but I do believe things will shake out for the better. I’ve started to see little signs in the last few months I hadn’t seen before. Sure, lots of blogs are starting up, but so many are shutting down after months when their writers realize that passion for a hobby isn’t enough to sustain the creation of original content for the long term. I’ve seen jobs, once coveted, go unfilled because media organizations decided to cut the pay for them. Ultimately, what will sort out Yelp and the establishment more than anything is that you can’t value content as king, but always pay a pauper’s sum for it.

Everyone’s A Critic: Yelp, Twitter and the end of Western civilization?

The State of the (Visual) Art