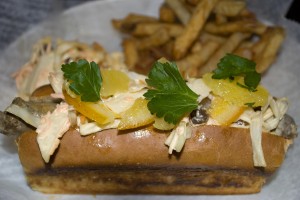 It may not be the jovial wise-cracking of Hot Doug’s owner Doug Sohn, but Franks ‘N’ Dawgs owner, the Australian-born Alexander Brunacci, cracking here about a photo of Kim Kardashian, is doing fine with his own brand of cash-register-side smart-assery.

I hate to even bring up the whole Hot Doug’s thing, because I know everyone else will too. But, frankly (so punny, I know), it’s impossible not to. Franks ‘N’ Dawgs with their “5-Star Dining on a Bun” tagline and by virtue of its similarities to Doug’s, has the encased-meats emporium in its cross hairs.

But Franks ‘N’ Dawgs, more often than not, is not like Hot Doug’s. It’s not a pop-culture-kitsch-laden dining room filled with mustard-and-ketchup-colored bric-a-brac or sexually charged mustard-covered Britney Spears’ photos. It doesn’t serve duck-fat fries, and the Buzzcocks aren’t snarling in your ears. Franks ‘N’ Dawgs also makes some of its own sausages.

These are, on the whole, generally good things. For example, if your aesthetic tastes are informed by GWAR or the Vampire Lestat is one of your heroes, you will totally dig the black-paint-and-studded-metal-lined walls. If you don’t just skew fashionably goth, but are really depressed, or lovelorn, you will love the Smiths-laden soundtrack.

If you are like me, you will also like their pitch-perfect, well-salted deep orange-Marigold colored French fries. Just make sure to mix the house-made aioli with a little salt before you dip them in to it. Also, as a matter of perspective, which I know many wouldn’t agree with, I’ve always thought that Sohn’s regular fries were better than his usually limper duck-fat fries, and that frying them in the oil was kind of a gimmick. The pork-and-suet-fried fries at the Publican, now that’s an oil trick I can get behind.

Also, though Sohn is culinary-school-trained, he doesn’t make his own sausages. Who can blame the guy? He’s a one-man show who’d have no life if he did. Instead, he’s sourced sausages from some of the very best purveyors nationwide, and his selections are as satisfying as any charcuterie I’ve had.

Frank’s doesn’t make all their own sausages either, but when they do, as in the Chicken Caesar—a garlicky juicy chicken dog—it’s a really special thing. When others make theirs, as in a pork-loin sausage or a beef curry dog, the texture sometimes seems a little too fine and lean.

Frank’s split and toasted Texas-toast-thick buns have airy, though not eggy, brioche-like interiors, and while I wouldn’t want one for my basic Chicago dog, I prefer them over the general buns Sohn uses for his gourmet sausages.

I generally subscribe to the theory that there’s nothing dirty about hotdogs, pizza, bbq and sex unless you’re doing them right. That’s why I appreciate the delicate organic-topping-laden Great Lake pizza, but I’ll never hunger for it like an oozy dripping sausage-hunk-and-giardinara-topped slice of Pequod’s.

As such, I’ve always loved that though Doug’s gourmet sausages might sound dainty, the reality is: dripping with melting foie gras, slathers of truffle-funked mustard, and sweet nests of caramelized onion, they were easily as dirty as the backstage green-room antics at a Tommy Lee/Kid Rock double-bill concert.

However, maybe I’ve changed, for I really like the architectural salad, the jewel-like curls of lacquered candied orange peel and blood-orange-oil-perfumed raisin slaw piled on the Franks ‘N’ Dawgs beef curry dawg. In some cases, the refinement of the condiment and balance of flavors on some of these hot dogs would be at home at Brunacci’s brother’s (Frank) kitchen at Sixteen in the Trump Tower.

I still retain my old ways, though, for my favorite thing at Franks ‘N’ Dawgs is the celebrity-chef-of-the-month offering from Chicago-lobster-dog-inventing chef Phillip Foss of Lockwood. The “Foss Hog,” a pork-loin sausage piled with cobb-smoked bacon, a runny fried egg and maple syrup, is a drippy satisfying sweet smoky mess and a wonderful edible representation of the smack-talking, occasionally ribald Foss.

Don’t get me wrong. I love Hot Doug’s. It’s one of those places I return to, where I happily spend my own money, forget about my profession and chow only for the love of the game. But, I think Franks ‘N’ Dawgs has got something worthwhile going on. And best of all, the only line you occasionally have to wait in to eat here is if you drive and must feed the city’s automated parking meter outside. That however is likely to change.

“Also, as a matter of perspective, which I know many wouldn’t agree with, I’ve always thought that Sohn’s regular fries were better than his usually limper duck-fat fries, and that frying them in the oil was kind of a gimmick.”

I will agree with it. I don’t know that it’s a gimmick, but I stick to the regular fries, and when I seek an avian oil in which to fry potatoes, it’s goose lard (available at Paulina Meat Market), not duck; to me that’s the true taste of frying in Europe.