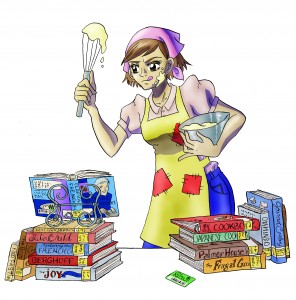 I never feel the pinch of the recession more strongly than when I am standing on the outside of a restaurant window. Say it is a steakhouse; the white linens and the showy trays of raw beef cuts carried around by the waiters both seem to measure the distance between me––and my young, pseudo-employed cohort—and a life of easygoing prosperity. Looking up and down the street at the frou-frou coffeeshops and the jewelry stores with guards posted out front, it can be easy to wonder why so many of us choose to live in a place where most imaginable activities involve a cash transaction. Isn’t there somewhere we can go to avoid paying for our leisure?

I recently took a trip to the two overstuffed rows of cookbooks on the fourth floor of the Harold Washington Library. This took longer than I thought, since it is difficult to move quickly past titles like “The Spicy Food Lover’s Bible,” “The Life & Cuisine of Elvis Presley” and the cryptic and potentially misshelved “A Taste of Murder.” By the time I reached the end of the first row, I felt slightly groggy and deeply heartened––looking at these books was not so different from looking through restaurant windows, except that here the key resources are time and effort rather than cash.

And apparently I am not the only person who enjoys using this section of the stacks. On the day I visited, Assistant Director for Collection Development Stephen Sposato told me that a copy of “The Joy of Cooking” was currently checked out of each of the library’s seventy-four branch locations. Library use has gone up thirty percent in the last two years, and a large part of the demand has been for do-it-yourself titles on everything from bread baking to urban vegetable gardening. “We’re buying titles we wouldn’t have had to buy so many of,” he said. “I just looked into buying a book about raising your own chickens.”

Chicagoans will be happy to know that the collection includes some choice examples from the city’s culinary history, too. German classics fill the widely circulated “Berghoff Cookbook.” Tucked away in the reference section, recipe collections published as fundraisers for hospitals and clubs chronicle everyday eating, while a 1940 edition of the “Palmer House Cook Book” explains gourmet dishes ranging from calves’ brains to lobster thermidor.

It was a challenge to figure out which cookbooks to take home with me this visit––should I take a page from the Alinea restaurant cookbook and try to make my own carrot foam? Should I get crunchy, and learn how to keep goats on the back deck? Ultimately, I choose a few different titles, including James Peterson’s “Glorious French Food,” a heavy book with lots of glossy pictures. The kind of book that is most appealing when it’s free.

I feel a little guilty about choosing something as standard as French food from the library’s many offerings, so I decide to cook an unusual recipe called poulpe en daube––octopus stewed in red wine. I have never cooked an octopus before, but I know they are available fresh and frozen at a surprising number of places. Plus, I am eager to try any recipe that seems like it could be either surprisingly good or totally disastrous.

Between home and the library, I find octopus for six dollars per pound. A bottle of wine for cheaper than that. Before long, they are diced, mixed and simmering together on the stove, and I am mixing olive oil into egg yolks to make aioli, a kind of garlicky mayonnaise that goes in the bottom of the soup. When dinnertime comes, it is clear that poulpe en daube is not disastrous. The octopus gives the wine a mysteriously inky depth, which the aioli cuts across in velvet driblets––a pleasure which is amplified knowing that no waiter will rush me if I want to sit sopping up my broth with a piece of bread for thirty minutes.

So if you, like me, have an appetite that is bigger than your wallet, I have this advice: dust off your library card, head down to the Harold Washington Library and browse the cookbook stacks until you find a recipe that suits your fancy. Call some friends, open a bottle of wine and eat––who knows, if you live in a first floor apartment, you might just find someone gazing longingly through your window.

Looking through cookbooks also serves as inexpensive travel inspiration during “recession times”. Thanks so much for this entertaining..and delicious…article!

Thank you for reminding us that canned beans and sliced bread do not have to mark the final frontier of our culinary imaginations…I was almost getting to that point, what with how busy life can get. But I know just what you mean when you describe that feeling of being “slightly groggy and deeply heartened”–truly nothing beats the journey of cooking yourself (and loved ones) a delicious, exciting meal. Ditto to Barbara, and cheers.