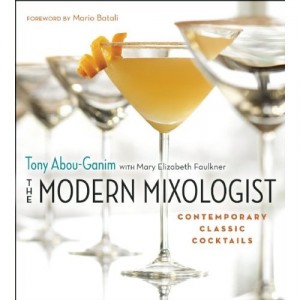 April showers not only bring May flowers, but a flood of new cooking titles. While I’m usually psyched about all the new recipes, I also get overwhelmed to the point of a potential Xanax habit by the mountain of books to be read. Thankfully, there is a drinks portion of the cookbook market, and this year, inspired by Tony Abou-Ganim and Mary Elizabeth Faulkner’s “The Modern Mixologist,” it only took a few Negroni cocktails to calm me. Through the course of reading ten or so cookbooks, my recipe (and my liver) changed considerably. If you, like me, feel so inclined to lubricate your reading journey through the three tomes I recommend below, here’s my final Negroni recipe:

2) Run 750 ml of Smirnoff through a Brita filter a couple of times to neutralize the flavor as much as possible. You can also skip this step, as Smirnoff is pretty clean already and I’m likely being OCD. Mix juniper berries with filtered vodka. Let the mixture sit for twelve hours. Add remaining ingredients to infusion for another twelve hours.

3) Filter the infused mixture through cheesecloth or fine mesh sieve into a clean bottle. You now have some bootleg gin that costs a third of most commercial varieties and tastes twice as awesome.

4) Fill rocks glass with thick ice cubes, pour in 1 oz of your gin, 1 oz Campari, and 1 oz Carpano Antica (you will never drink another sweet vermouth again). Stir the drink clockwise twenty times (or counter-clockwise if you distrust authority). Take a two-inch piece of orange zest and warm the skin with the flame from a match. Hold the warmed zest over a flaming match and your cocktail glass. Squeeze zest over flame to release essential oils and caramelize them. Be careful not to singe your eyebrows. Rub the flamed zest around the rim of your glass and toss into the drink. Sip.

Despite the fact that the craft cocktail insurgency is at a fever pitch, we’re still missing the coalescing game-changing modern primer that inspires home drinkers and seasoned bartenders, the analog to Thomas Keller’s “The French Laundry Cookbook.” With its concise cocktail history, storytelling and comprehensive bartending primer, Abou-Ganim and Faulkner’s book comes pretty close to fulfilling my desires. The discussion of spirit infusions, fresh syrups and purees is nice, though one would also love a primer on making bitters, using fat washes and a discussion of molecular mixology—standard ideas in high-end cocktail bars these days. This book was ten years in the making, a real testament to the persistence and vision of Abou-Ganim, a Michigan boy who became the cocktail king of Las Vegas at the Bellagio. Despite his stature, Abou-Ganim’s one of the more humble and passionate successful food people I’ve met. This comes across in the book. Most refreshingly, he’s not judgmental or pedantic. He doesn’t vilify vodka or make amateurs feel dumb. His only non-negotiable is the pursuit of quality. 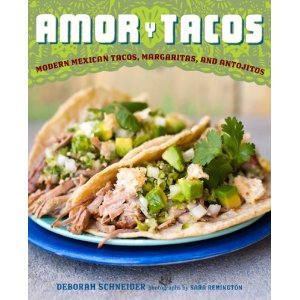 In a world of lumbar-threatening old-school Yellow Pages-thick coffee-table books, this tiny taco primer proves that size doesn’t really matter at all. Jump right in and you’ll be cooking up home versions of the treasures you’ve likely been scoring at Big Star. Whether it’s roasting chilis or advocating for corn tortillas, Schneider, a California chef, pays attention to authenticity like her forebears Rick Bayless and Diana Kennedy. However the real appeal of her approach is the over-the-top late-night drunk-food recipes like Coca-Cola-braised beef tacos, bacon-wrapped chili-studded hotdogs and chicken-fried-steak tacos. My favorite indulgent recipe, though, is for the Taco Vampiro, basically what happens when a steak taco makes love to a quesadilla. 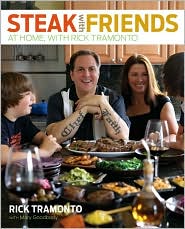 Who’d thought we’d see the day where the old expense-account standby stereotype, a thick juicy steak, would once again, thanks to the national obsession with pork, be considered a unique proposition for a cookbook. Hell, even if it’s not, Tramonto’s approach to showcasing the oft-maligned red meat is. Along the way, the chef flashes his forearm tattoos like a Los Angeles gang-banger, drops quotes from the Bible, and recommends music to cook by (“hot appetizers demand high-energy music such as that by Metallica, Rush, AC/DC, Van Halen, and Alice in Chains”—Though, I’d argue Alice in Chains’ “Rooster” seems more apt for poultry duty). I’m not sure what you’d listen to while making Tramonto’s Italian Beef and fresh giardiniera recipe (“You Can Call Me Al” by Paul Simon?), but I like it. It’s hard not to read the fervent supporting notes on foie gras in this book as one last shiv to the gut of Charlie Trotter, a follow-up to Tramonto’s famous dust-up with the chef over the ethics of serving the delicacy. Even if that’s not the case, you won’t love the foie recipe as much as the crispy sweet breads with pecans and honey.