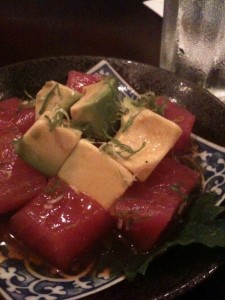 “I’m the cheapest plumber in Chicago!”

Those are not the words you want to hear shouted from a restaurant kitchen while you’re having a nice meal with your family. Nor does it help when the grim-faced owner of the restaurant comes running through the back followed by the huffy grizzled plumber, quoted above, toting a fat bag of tools.

But, that’s just what happened a couple of weekends ago as I ate at the two-month old Masu Izakaya when the kitchen encountered a main plumbing line back up about an hour before a Saturday rush. I bring this up not as some metaphor for the failure of the restaurant. Rather, I’m impressed how owner Steven Song (who with his cleanly shaved head, trim physique and intense eyes would make a great lead in a Kurosawa film) handled the situation.

The plumber knew he had Song in a hard place and changed his quoted price. When Song balked, the plumber insisted that he was the “cheapest in Chicago.” Sensing a scam, Song kicked the dude to the curb and called another plumber.

I like that he didn’t capitulate in a time of crisis. It bodes well that in a business where Song will likely be faced with making all kinds of high-pressure decisions to cut corners, he’ll be smart in assessing what’s right for his customers and not just doing what’s expedient. Of course, this isn’t his first rodeo. For more than a decade Song ran the now-defunct Gold Coast sushi joint Tsunami, allegedly a favorite local haunt of The Rolling Stones.

Just as he innovated with high-end sushi, Song is now trying to introduce the super-moneyed heart of Lincoln Park to the Japanese pub or izakaya. The original izakayas were low-key, de facto men-only spots, where Japanese business dudes might gather after a tough workday for loads of sake and a bevy of cheap snacks—sort of a gentleman’s club without the strippers. But, over time, as with most old-boy’s clubs, except the Catholic priesthood and Augusta National Golf Club, women and younger folks started getting in on the action and izakayas evolved into convivial Japanese-style tapas bars. In the last few years they made their way to the coasts, Vancouver and New York in particular, and now are finally taking root in Chicago.

Masu is not exactly a traditional izakaya. It’s still hedging its bets with a simple, though comprehensive sushi menu and, as our server mentioned, if we wanted some of those “crazy complicated” rolls everyone else makes, they could accommodate. Who can blame them? Most of the folks living within a few square miles probably think an izakaya is a new type of crotch-rocket motorcycle.

Though by serving grilled chicken heart, liver and skin yakitori (Japanese kebabs), Masu definitely establishes that it isn’t Benihana. The crispy charred skin whose fat melts in your mouth like a poultry M&M is the greatest use of animal skin since The Publican’s cider-vinegar-glazed pork rinds. The liver, however, is dessicated, a chalky block of overcooked offal. Adventurous or not, the best of the yakitori is the smoky sweet gyunegi, or thinly sliced beef wrapped around green onion.

The “Tuna Tuna,” which I personally would have called Toro, Toro, Toro, a bowl of exquisitely rich smoky avocado cubes and jewel-like hunks of ruby-colored tuna glistening in citrus-shoyu sauce, is emblematic of what you get here: simple uncluttered protein, lightly seasoned or cured to celebrate quality ingredients. The hint of orange on this plate is a light contrast to the rich mouth-coating mineral-tanged tuna that enhances but never obscures.

But, tuna, you can get anywhere. Hamachi or yellowtail collar is much rarer. The collar, like a beef cheek, is a fairly stationary part of the fish that collects fat and is underworked, thus guaranteeing a flaky succulent tenderness superior to other piscine cuts. Masu’s version celebrates this texture with a light grilling and a simple sprinkle of salt.

All of the fish we tried was extraordinarily fresh, except for a slightly off bit of sweet miso-glazed black cod (an old Nobu Matsuhisa recipe). Still, the crispy blackened skin on the cod, a seafaring reminder of the caramelized cheese crust at Pequods, the zingy pickled ginger stem garnish, and flaky flesh mitigated any real disappointment.

More standard items like katsu don, featuring a soul-stirring melange of sweet dashi soy-coated rice topped with crispy breaded Duroc pork loin, sweet earthy shitake mushrooms and a whipped-egg savory meringue-like dome is better than your average rice bowl. Nearby DePaul students looking for an edge before an exam might try a bowl of the stuff. For, in Japan, students often wolf down a bowl of katsu don, as the “katsu” in the dish not only refers to tonkatsu, the word for Japanese breaded pork loin, but it’s also a homophone of the verb “katsu” which means “to be victorious.” With the impending Stanley Cup Finals, Blackhawk fans might also wish to take note.

After my meal, I started walking up Halsted where a half block north, the ubiquitous weekend crowds at Café Ba-Ba-Reeba were pouring out on to the sidewalk. It struck me that in 1986 when Chef Gabino Sotelino opened the now stalwart tapas joint, most people thought Spanish small plates were the souvenirs you hung on your wall after a trip to Barcelona. I think once he gets past the pesky plumbing problems and minor quality issues, Song has a similar chance to do the same for Japanese small plates with Masu Izakaya.

All I can say is, that is funniest review I have read about our restaurant EVER!! I can picture it now, seriously!!!! Go honey, go! I am thrilled you had a sense of humor about it. Owning a restaurant is never dull. I am super proud of my husband and our staff at Masu. I certainly hope we are a new main stay in area. We love it!