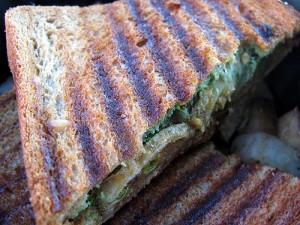 If you need evidence of the oppressive rise of random pop culture (or Wikipedia’s mastery of search-engine optimization), look no further than a Google search for the word “snow.” How else to explain that white Toronto-born rapper, Snow, the man behind the highest-charting reggae single of all time, “Informer” (wherever he is, Bob Marley must be rolling a big fat spliff over that one), is the second matching result. It’s probably only a matter of time before the wordsmith of the eternal lyric “licky boom boom down” takes over the more familiar fluffy cold precipitate on the internet.

I am reminiscing about the heir to Vanilla Ice’s throne, because I heard his desi twin, an Indian MC rocking a familiar “Informer”-like melody while sipping cardamom chai at Lincoln Square’s new, and likely Chicago’s only, coffee/tea-homewares-Indian fusion-panini-slinging fashion boutique, Delhi 6.

The name of the restaurant is a nod to the street-food district in Old Delhi named Chandni Chowk. Though for me, it also invokes the old movie “Butterfield 8.” Unfortunately, there is no bedroom-violet-eyed Liz Taylor slinking around the restaurant clad only in a white sheet.

I’m more than content, though, to settle for Delhi 6’s charming tattooed owner Shalini Katariya since she makes a mean cup of chai. In fact, maybe the meanest for, until now, and there have been many cups, my go-to chai (seriously) has been the one served at the Panera in the South Loop. Instead of some mystery spice syrup and steamed milk, Katariya’s features real black tea and heady nostril-flaring sweet cardamom. I am smitten.

While Delhi 6 is a cool little space with a constellation of globe lamps, gauzy sheer curtains, maple wood tables, plenty of coffee and hand-made fudgy brownies housed under a glass dome, it is not your average Jennifer Aniston and David Schwimmer plush-couched clubhouse. It’s also a serious Indian street-food emporium.

In fact, if the city council never legalizes street carts and roving food vendors, those leading the moveable feast movement might look to Delhi 6 as an alternative approach. For the tiny kitchen, hidden behind a couple of honey-colored wood-slatted doors, the kind usually fronting a closet, is easily about the size of the back of any food truck.

Eschewing old buffet standbys like butter chicken and palak paneer, Katariya and her husband Vikrant kick out killer pani puri. Pani puri, a fried dough that’s hollowed out and filled with various condiments, and dipped in an herb-and-chili-spiced water, is India’s answer to the American hot dog. A variation of the snack, which has more nicknames than Sean Combs (gol gappa, gup chup, phuchka and bataashaa) is found in almost every region of the subcontinent.

The version at Delhi 6 features light fresh semolina wafers stuffed with spicy chickpeas and potato drizzled with sweet tamarind chutney served with a side of “masala water” for dipping. The sulfurous tang of the water, derived from Indian black salt, might rankle some, but it’s a flavorful light authentic foil to sweet tamarind chutney and the rich filling. 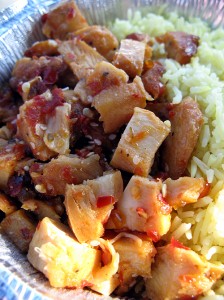 The Katariya’s chili chicken, silky bits of chicken thigh lacquered in shiny honey and red pepper glaze, reminds you of a transcendent fiery Japanese teriyaki. The spices on this dish, as with most at Delhi 6, are assertive (that is, not dumbed down for clueless white folk), but not overpowering or insurmountable.

While the classics are good, the most exciting thing about Delhi 6 is their particular fusion of old-school Indian favorites and that coffeehouse standby, the panino. Out-of-season caprese and yawn-inducing BLTs found elsewhere have been replaced with mint-and-tamarind-chutney-slathered, cumin-spiced potatoes stuffed between grill-kissed rustic whole-grain bread (The Samosa-wich) and ginger-and-green-chili-spiked tikka masala-drenched chicken wrapped in pillowy grilled naan (Chicken Mirchi Wrap) at Delhi 6.

Frankly, I love the place so much, my only problem is that it’s so far away from my West Loop condo. Hopefully, the Katariyas’ prowess will enable them to spread their culinary art far and wide, and like Snow in 1993, they’ll eventually be everywhere.