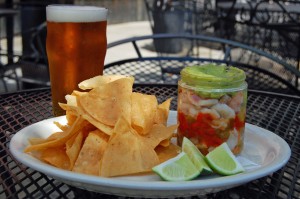 With food, it’s often the little things that make the big difference. A small shrimp, the choice of cast iron and just a second or two of searing, for example.

Five months ago, Matt Wilde walked into Moonshine, a Wicker Park bar and grill with a neighborhood-watering-hole vibe, with the intention of transforming it into a fine-dining-caliber destination. There would be no white linen, and sports would still be available on the tube. But what came out of the kitchen would be carefully thought out, selectively sourced and masterfully, if simply, prepared.

Wilde’s cast-iron shrimp ceviche fits this bill. Traditionally with ceviches, a seafood is “cooked” in lemon or lime juices, but Wilde has put a twist on that for his dish at the rebranded and refurbished Moonshine Brewing Company in Wicker Park.

“I take the shrimp and I sear it in a cast-iron pan. Cast-iron pans are really cool because they are this black metal that you can get really hot. So I sear the shrimp for just a second to get a caramelized outside for flavor and then I pour them out half-cooked and marinate them in lemon and lime juice,” Wilde says.

Before taking over the reigns as executive chef at Moonshine, Wilde was a sous chef at 312 Chicago and had never before worked in anything other than fine-dining restaurants, much less a bar. Now Moonshine has an in-house brewery, a rooftop garden that Wilde has planted and a fine new approach to food. (Elias Cepeda)

Moonshine Brewing Company hosts a free new-menu-launch party on June 17, starting at 6pm on its patio. Tasting portions will be served up by Chef Wilde. 1824 West Division, (773)862-8686.

Though I have never been a fan of shrimp, I must admit after reading this article I might seriously have to reconsider….as I can almost taste and smell it!

Thanks for reading, Pat! Moonshine looks to be an excellent summer spot