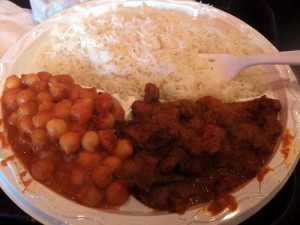 It seems everyone wants to be the next Chipotle. For every upscale chef who opens a new hotdog stand or sandwich shop these days, there are two entrepreneurs trying to ape the success of the McDonald’s of Mexican, and become the next big ethnic franchise.

As with chefs going casual, these attempts have often paid off handsomely for local eaters. Take Me Out, Let’s Eat Hotties launched a thousand spicy garlic-soy-glazed hot wings, while Crisp in Lakeview has blessed us with killer Korean fried chicken. Though for every one of those spots, there’s also a Chutney Joe’s, serving up mostly mediocre fare.

One of the newer Chicago restaurants on a “Look Outside the Bun” lark hoping to ameliorate the failures of a place like Chutney Joe’s is Shabuka Indian Grill, tucked into a Loyola-area strip mall next to, surprise, a Chipotle.

So, what is a Shabuka? I have no idea, however, I suspect maybe after a late-night bong session and a few chants of boom shalakalaka, somewhere in the haze, Shabuka emerged as a fake, but vaguely plausible Hindi word, and thus the restaurant was christened. I do know that Shabuka in Swahili means “deceitful people” or “exaggerations.” And, the Swahili origin makes more sense when you consider the vaguely African-safari-looking logo of the restaurant whereby the “S” of Shabuka looks like a Tiger ripped through the sign with its claw.

But, to be fair, the owner of Shabuka seems like a nice guy, and while his motivations to open this place don’t portend great fare (“I used to be in the pizza business, but there was too much competition. So I hired an Indian chef.”) I don’t think he’s particularly deceitful. After all he told us the mango lassi on the menu wasn’t really a lassi as much as it was a smoothie (it needed some sugar).

The guy may, however, be a little misguided. For the crusty dried wallboard paste-like naan at Shabuka tastes and looks exactly like the frozen version sold at Trader Joe’s. The samosa wrappers are leaden, and the wraps are dessicated tortillas. Shabuka clearly doesn’t do bread.

That aside, unlike Chutney Joe’s, they don’t dumb down the beef masala for white people. Fiery, tender and wafting cumin perfume, it’s as good as any version on Devon. Likewise, the Lamb Rogan josh is succulent and slathered in a shiny gravy redolent with cinnamon and cardamom. Ironically, it’s the common chicken tikka masala, the General Tso’s of American Indian food, which displays a sour tang that’s the only real terrible disappointment beyond the bread. While it doesn’t blow you away, for the price and quality of the food (the bread is better at Chutney Joe’s), Shabuka is one of the better bets for quick-service Indian in Chicago. 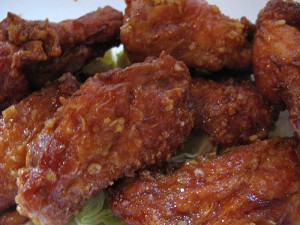 Unlike, Shabuka, Chinese Yum Yum, a new takeout spot in the West Loop, isn’t really trying to be a franchise. You could never execute the James Joyce-novel-length menu here on a consistent basis at the national level.

Like Shabuka, its name is terrible. Though restaurants with “yum yum”or “tasty” in their names rarely ever are; for the most part, this spot is. While Yum Yum has the usual assortment of American-Cantonese classics, it also has a smattering of more authentic Chinese fare including a soul-satisfying bowl of ginger-infused congee (rice porridge) flecked with pork and preserved black eggs, also known as hundred-year or horse-urine eggs (because they smell faintly like ammonia). Though the eggs are pungent, the fermented quality gives a nice fizzy depth to a spoonful of the congee.

The salt-and-pepper calamari eats like popcorn chicken of the sea, but doesn’t quite surpass the squid fries at Shui Wah, on account of Yum Yum’s misguided avoidance of MSG. For those of you who protest, and ignore the science that says MSG is okay, at least consider the reason of Vogue food writer Jeffrey Steingarten, who once said, “If MSG is bad for you, why doesn’t everyone in China have a headache?”

The one destination food at Yum Yum that’s pretty incomparable is their honey garlic chicken wings, featuring a glistening sweet lacquered orange cracklin dotted with a pungent confetti of the stinking rose. Add in moist to the bone flesh, and you have a piece of chicken born of a torrid love affair between a couple of wings from Harold’s and Crisp. On these alone, you could build a franchise.

I live in a popular college town and the fresh, casual wave of restaurants has been welcome. For the most part they offer interesting food and atmosphere at decent prices. The hitch seems to be that they think this trend is their own idea. Success in this fresh, casual genre is going to require a unique angle … and that is getting harder and harder to find.