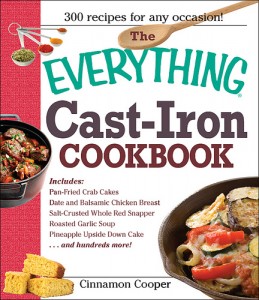 There may be no better name for a cast-iron cooking master than Cinnamon Cooper. Cooper, longtime “One Good Meal” columnist for the Chicago website gapersblock.com just released her first cookbook, “The Everything Cast-Iron Cookbook.” In it, she eschews the typical Southern fried chicken, cornbread and beans approach to Cast Iron cooking in favor of a global perspective that includes plenty of Thai, Indian and Latino recipes. I caught up with Cooper to talk about the new book.

What is the fabric of your memory that informs your love for Cast Iron?

I don’t remember not having cast-iron skillets. I was surprised that skillets came in other forms, actually. And while my mother was more likely to use a slow cooker than a Dutch oven, it was pretty easy to translate a number of dishes to Dutch oven cooking. I remember being very young and helping my grandfather punch the centers out of pieces of bread to make “Bird in a Nest,” which is just a piece of bread that has an egg cooked in the center. I thought it was magic and it still has huge nostalgia when I make it. My grandfather taught my mother how to cook, and she passed on a lot of those lessons to me.

I know you recently said Sushi Mike, chef at Tanoshii in Edgewater, was inspired by one of your recipes. What was it? How did that feel?

You essentially cook a scallop briefly in clarified butter, remove the scallop and quickly reduce thyme and white wine to pour over the dish. He turned to that and said “I like scallops, but I don’t like butter. He brushed sesame oil on the scallops, broiled them quickly, and then created a salad that included strawberries. It was nothing I ever would have come up with, but it was one of the best items I’ve had from him. I fully admit I cried a little. Partly because I was touched, but mostly because the flavor was so balanced and whimsical and rich.

You have a recipe for Salisbury Steak. While it’s my all-time favorite Swanson TV dinner, I respectfully ask, WHAT!?

This is one of the dishes that my mother made frequently as we were growing up. It was always served with mashed potatoes, homemade biscuits and some canned vegetable. I loved it as a kid and continue to love it now. It is one of the quintessential American dishes, and became so popular as a frozen dinner in the 1950s that it was one of the first dishes that the USDA ended up regulating, because too many companies were using lots of starchy filler and not as much meat. It was a dish that was created around the turn of the last century by Dr. Salisbury who decided that humans had “meat teeth” and therefore should mostly eat meat. He created the dish as a health food and required his patients to eat it three times a day and drink a lot of hot water. I’d never had it as a frozen dinner until I was in college, so the recipe in the book is what I crave.

Any sense of why cast-iron cooking has generally been so tied up with the Southern mythology and why people haven’t gone as global as you have with this book?

Cast-iron cookware was the only cookware available until after World War II, when people began using aluminum cookware that was lighter and that could be washed in the newfangled dishwashers that were coming out. Then the invention of cookware with non-stick coatings came about at the same time people shied away from the high-fat Southern or traditionally American cooking styles. So as we lost the tendency to cook what we had, we also lost the cookware it was made in. I think that is changing as I see cast-iron cookware popping up in more and more places (and with higher and higher price tags).

If you were going to recommend one recipe from the book to get people excited, focused on the glories of cast-iron cooking, which would it be, why?

If you already have a skillet that is at least lightly seasoned, then a pineapple-upside down cake made in a cast-iron skillet should be one of the first things you try. Being able to create the caramel/pineapple topping and pour the batter into a hot skillet so it begins to cook before it hits the oven, and then being able to impress your friends while you turn it upside down onto a plate for serving is just an easy and impressive dish.

Beyond your book, what cast-iron resources/people/places should we know about?

The best place to buy cast-iron cookware is a garage sale or a flea market. As long as you’re not buying a rare or collectible skillet, you can be assured that what you get there is most likely better than anything you can buy new. Wagner and Griswold are the two older brands that I recommend highly. They can get pricey, but a skillet that has been used for years is going to be better than anything new. If you are buying new, I highly recommend sticking with Lodge products. There were items I couldn’t find locally that I needed and I purchased everything from Barb and Doyle Bailey at castironcookwareshop.com. They have fantastic customer service.

Great post and wonderful interview with Cinnamon. Her knowledge of the history of cooking in cast iron is extremely interesting and helpful. It is only exceeded by her ability and versatility in creating amazing dishes in cast iron cookware. Her new cookbook, The Everything Cast-Iron Cookbook has bumped all our cook books to the end of the shelf. We have bought several copies as gifts for friends. Do yourself a big favor and get Cinnamon’s book. Some of this material will be showing up in our blog (with due credit given) and many of her recipes will show up on… Read more »

Cast iron is hands down the best. I used non-stick pans for a long time, but a nice, big steak done in a cast iron skillet plays in a whole different league. Besides, you can buy a top notch pan for under 80 bucks and it will last you a lifetime. The non-stick cr*p may last 4 years if you are very lucky. If you search the web a bit, you can often find a really good pan on sale. There are always some amazing offers on cast iron kitchen stuff posted on the cast iron pots website. Well, that… Read more »