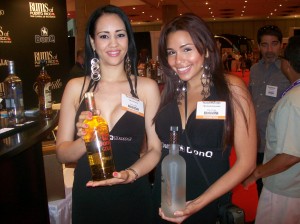 The New York Bar and Wine Show, an annual two-day convention that takes place at Midtown Manhattan’s Jacob Javits Convention Center, showcases what’s new in the beverage industry, from special registers wirelessly attached to bottles (to better control the drinks sold) to novelties like a Russian roulette-style game wherein a plastic revolver has a chamber that releases a shot of liquor to the lucky ‘winner’—if the ‘loaded’ chamber ends up in his or her hand (think bachelor parties and dorm rooms, if you’re wondering who would do this).

But the greatest attraction is, of course, the booze, and this year’s event had plenty, ranging from new liquor brands, international beers and wines to the latest ideas in mixology presented by different bartenders from all over the world.

Among the most interesting new brands is a non-alcoholic beverage named Amzterdamit (www.amzterdamit.com), which is advertised as an herbal mix that gives revelers the pleasure of drinking without the alcohol. Launched at the show (and pretty much unavailable anywhere at the moment), this Netherlands-inspired ‘virgin drink’ is mostly aimed at designated drivers, teetotalers who like to go out and also at under-21 clubs. Amzterdamit is a refreshing beverage with a citrus-like flavor that does feel like a cocktail—just without the guilt.

On the slightly more serious front is Minx (www.drinkminx.com), available through Midwest Distributors, a pre-prepared energy drink that includes premium vodka, taurine, guarana, ginseng and damiana. Producers claim it to be the first “erotic” cocktail which is “guaranteed” to arouse drinkers for sexual activity. Other interesting new mixes are Mill Six, a Dutch-produced citrus blend similar to Cointreau but with a much lower content of sugar and Pasión (http://www.tequilapasion.com), a naturally pink-colored ‘aphrodisiac’ tequila aimed at the club-going female market. The flavor is not that different from products like un-aged Patron, but it has a nice, smooth finish without the classic burn associated with that product.

The best Scotch we tried is a Tomatin, a beauty of a single malt with an incredibly smooth finish. What grabbed our attention on the vodka front was actor Dan Aykroyd’s Crystal Head Vodka (crystalheadvodka.com), a product sold inside a crystal skull. The response to this novelty has been so great that empty bottles have sold on eBay for as much as $20 (almost the price of a 750 ml bottle). On the foreign side is Russian Diamond (corus-us.com/products.htm), one of the few vodkas officially selected for events in the Kremlin and also one of the few brands served in Aeroflot flights. 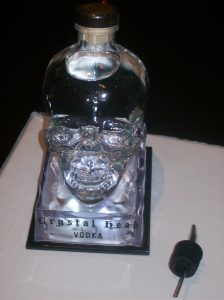 Among the wines, a whole new series of North Fork, Long Island, (newyorkwines.org) producers were presenting their new vintages. Wines from that region have been in an uphill battle to compete with their California counterparts, but it has been worthwhile. New York wines are slowly becoming respected and recognized among connoisseurs and casual drinkers alike.

Also available for tasting were Australian wines—namely the Sidewood Estate (sidewoodestate.com.au), which was represented by the charming owners Owen and Cassandra Inglis, who purchased the land in the Adelaide hills and have since produced a wonderful portfolio that includes a beautiful lightly oaked chardonnay and a very rich shiraz (one of the most common Aussie varietals).

But the crown jewel of this year’s event were the cognacs. Presented by France’s National Bureau of Cognac (cognac.fr), the presenters sought to remove the spirit’s bourgeoise image and reintroduce it as a very mixable drink. During the presentation, we tried a nineteenth-century-style mint julep, a sidecar and a very tasty cognac summit (summit.cognac.fr), a more recently invented citrus-infused creation designed for warm summer nights.

Many of the brands on display at the New York Bar and Wine Show are not yet available nationwide, though several presenters mention Binny’s www.binnys.com as one place to find them.