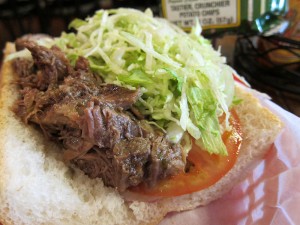 Ever wonder how Utah, that bastion of alcohol-eschewing, modesty-pursuing, piety-peddling Mormons ended up naming their basketball team after the devil’s music, Jazz? Well, to quote Mona Lisa Vito (Marisa Tomei’s character in “My Cousin Vinny”) when questioned about the correct ignition timing on a 1955 Chevy Bel Air with a 327-cubic-inch engine and a four-barrel carburetor: That’s a bullshit question.

The Jazz originated in New Orleans in 1974 and the Mormons had no hand in the moniker. Fortunately for Utah there was also a voodoo curse over those early Nola teams. In 1979, though they would have been the first team to draft and thus eligible to score the pride of Michigan State, Earvin “Magic” Johnson, the New Orleans Jazz traded away that draft pick to the Los Angeles Lakers for the mediocre late-career services of Gail Goodrich.

With that kind of bad juju, over $5 million of debt, and that getting hammered on Bourbon Street took more of a priority over basketball in The Big Easy, the owner moved the team to Salt Lake City in 1979. The team’s name and Mardi Gras-inspired color scheme, much to the chagrin of hall-of-famers John Stockton and Karl Malone who endured tight gold-and-green-trimmed purple short-shorts for most of their career, were retained.

This is all very important should you find yourself inside the lobby of Mac and Min’s, a New Orleans-inspired po-boy joint in the West Loop staring at a photo of Pistol Pete Maravich in a Jazz jersey, wondering why a Utah basketball player’s picture is hanging on the wall like I did. If you are, however, an NBA historian or an aficionado of seventies basketball, I apologize for the first three paragraphs.

Experts and novices alike probably have heard of the legendary Pistol Pete, who spent much of his hoops career in New Orleans. Novices however may not know that he died during a pick-up basketball game at age 40 due to a heart attack brought on by the fact that he was born without a left coronary artery. Maravich’s right coronary artery was grossly enlarged to compensate for the missing one, and thus you could say his heart, or a part of it anyway, was mighty big. Having his photo here in the lobby is appropriate, for the same can be said about Mac and Min’s namesakes, owners Mark Bires and Mindy Friedler.

The two welcomed West Loopers and showered them with great sandwiches and hospitality at this very spot on Madison Street in the original incarnation of Jerry’s Sandwiches (named after The Grateful Dead’s Jerry Garcia and because it sounded like the perfect old Jewish deli name). A few years later they opened a much larger Jerry’s on the hipster magnificent mile, Division Street, in Wicker Park. With the success of the second place, they decided to refocus the old Jerry’s on their love of New Orleans’ cuisine, and thus Mac and Min’s was born.

The tiny informal dining room, with its exposed brick, beads and shiny chandeliers that I once described as “designed by a group of drunken Mardi Gras-reveling interior designers” is pretty much the same, though it’s gotten a fresh coat of lime-yellow paint. It’s certainly a cozy spot to tuck into red-beans-and-rice soup, a smoky sausage and tender red kidney-studded swamp of spicy goodness.

If you want your food to match the wall paint, you should try the crispy wheels of fried green tomatoes. The tangy neon half-moon slices of tomato are cut whisper thin, a nice conceit that keeps them from becoming a soggy mess. 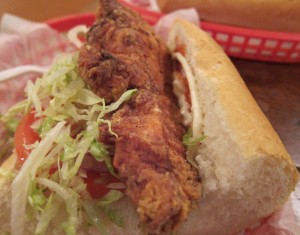 While the sides are good, Mac and Mins should be judged upon its sandwich acumen. In New Orleans, bread is everything for a po-boy, and by bread, I mean Leidenheimer Baking Company bread. At Domilise’s, where the half and half, aka oyster and shrimp po’ boy is king, they deliver Leidenheimer’s hot and fresh a few times a day. At Parkway Bakery and Tavern, they pile it with gravy-slathered shreds of rich roast beef.

Mac and Min’s uses the local coal-fired loaves of D’Amato’s for their basic white and La Farine for a wheat alternative. D’Amato’s is a touch softer outside and maybe a little softer inside compared to Leidenheimer’s, but it’s a pretty good substitute. While the La Farine is great if you’re slathering it with butter or cheese, ordering a po-boy on it is a grievous error unless you have life-threatening fiber needs.

There are twenty-plus fillings available. The hunk of fried chicken is a nice spicy facsimile of Popeye’s finest. Though the roast beef wasn’t quite as beefy as Parkway’s, it was incredibly tender and earns a spot in the mama-style comfort-food hall of fame. The “New Orleans BBQ Shrimp” were nice tender nuggets of Cajun-spiced shrimp, but slightly disappointing if you crave the Worcestershire-infused garlic-butter gravy served at Mr. B’s in the French Quarter. I have never had the root-beer-glazed ham po-boy at Mahony’s in New Orleans, however, I doubt it would be much better than the version served at Mac and Mins, a pink plank of brown sugar and sweet spiced oinker, and my favorite offering (so far).

Really the only thing that’s troubling about Mac and Min’s is that if you eat here too often, you could die young a la Pistol Pete from all the rich food. Then again, nodding along to brass bands or Dr. John while chowing down on a good po-boy would be a hell of a way to go.

will try it this week end, thanks

first time i tried this dish was in china, love it.