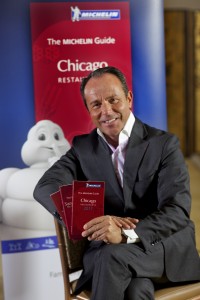 Last week, Michelin announced it had chosen Chicago as the next city in its North American guidebook series. Restaurants receiving even one star from Michelin’s famous three-star rating system are considered among the finest in the world and so this announcement has created tremendous buzz as both chefs and restaurant-goers wonder which Chicago restaurants will be rated and how highly. We interviewed the Michelin Guide’s worldwide director, Jean-Luc Naret, in the wake of this announcement.

For those who may not know much about the Michelin Guide, talk about its purpose , history and mission.
It is a beautiful story. The purpose of the guide was to help the motorists in France in 1900. At that time it was really something to travel from Paris to Marseilles. The brother who created the first Michelin tires decided to produce a guide to show motorists the way of the motorway in order to know how to, first of all, use the car. They had instructions on how to replace the tire, where you could find gasoline, because there was no BP at the time, lucky enough. It was a little reference book where you could have all the names of the towns, all the distance between towns, and you know exactly what to expect with lodging.

In the time since the first Michelin Guides were created, many other restaurant guidebooks have, of course, emerged. What makes the Michelin Guide different?
It makes a big difference that we’ve always had the same ownership; we actually have one owner. Also, we use inspectors [to rate restaurants]. We have a great team of inspectors that are French in France, Italian in Italy, Spanish in Spain, Japanese in Japan and American in the U.S. These inspectors are paid to go and eat in all the restaurants; they act like regular customers. They go to all the restaurants three hundred days a year and that gives us a good benchmark for not only what is good in the city, but what is good across states and across the world. The inspectors will go to the restaurants anonymously as well.

The Michelin Guide started in France, spread across Europe and to this day, there are very few cities and restaurants in North America that have been rated by you. What went into the decision to do a city guide on Chicago?
The fact that there are obviously some very talented chefs here. The level of cuisine deserves to be recognized by a Michelin star. At the same time, there is an incredibly different kind of cuisine all across the town. What is interesting is that you have some very good restaurants here and when you talk restaurants here, you are very serious about it. The chefs are coming from so many different backgrounds, from different regions and we saw that they really belonged to Chicago. So we started to come here rating the restaurants with a lot of humility but at the same time with all the experience we have rating restaurants around the world.

How long does that process take from start to end?
The inspectors really started to be in the city two years ago. It usually takes about eighteen months to really start the process, to start to really go to all the restaurants, to start to really dig in order to determine the best. Again, it is a selection process. For example, we will go to all the Mexican restaurants and we are going to pick the best restaurants, maybe only one or two or three. We are only going to pick the best. That doesn’t necessarily mean the most expensive, just the best in all the categories we rate.

The Michelin Guide is sometimes only known by the incredible influence it has to raise or lower the profiles of chefs and restaurants. Because of the guide’s status, the whole enterprise can be seen as a somewhat elitist one, which may be at odds with the spirit of Chicago as a city compared to one like New York. Do you think there is a conflict there?
The purpose of the guide isn’t to make certain chefs famous or to disparage any others. The purpose of the guide is to give the best information available for the city. When people pick up the guide and go to a place in the guide, they are going to get the treatment that the inspectors got. When people go into a restaurant, they do not get recognized and so get special treatment. That’s why I mention that we use inspectors. It isn’t like having a food critic who is going to write an incredible review and gets recognized. Will regular people get recognized? Nope. So that is why our inspectors are anonymous, so that we can ensure that you will get exactly the same treatment as the inspectors who inspected the restaurant got. Our information is reliable and accurate for whoever will go to the restaurants we rate, and that is our real purpose.

You mentioned earlier that you have Americans rate American restaurants. Does it work that way on a smaller scale as well? That is, did you have Chicagoans rating Chicago restaurants?
We have people in each of the cities. The team is American and they scatter. They go to New York to get some experience with those restaurants and they go to San Francisco as well. We cross-reference and cross-check. We do bring people from other countries too to come here to make sure that when we give two stars or three stars to a specific restaurant it is as good as the restaurants with the same stars in Europe.

“The Michelin Guide to Chicago Restaurants 2011” will go on sale in November.

This will definitely go on my Christmas list. I grew up in Europe, where the dog-eared Michelin Guide was a permanent fixture in the family car. Looking forward to comparing the Michelin ratings with local reputations. Thanks for the article!

Thanks for reading, Adrian! Glad you enjoyed the interview

What a cool story, Colleen. You will certainly have a unique perspective, then, reading the Michelin Chicago guide when it comes out after already being familiar with European editions when you were a kid!

How exciting to have chosen Chicago, I can’t wait to see the guide!