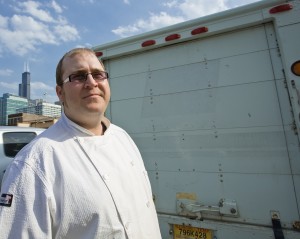 “They say if it ain’t broken don’t fix it, but I just said, ‘Just break it and let’s see what we can do,’” says Matt Maroni, owner of the Gaztro-Wagon. He’s not talking about breaking the wagon itself, a converted postal truck. Maroni’s talking about the law that governs his food truck, prohibiting him from cooking or assembling food on-site.

Gourmet food trucks have hit it big in other US cities like Houston, L.A. and San Francisco, and Maroni was confident his menu of “naan-wiches” could bring the trend to Chicago. Undeterred by the on-site food preparation ban, Maroni got his permit to vend food prepared at his licensed, stationary Gaztro-Wagon restaurant last week and hit the streets over the weekend. This isn’t your standard, questionably hygenic, only-marginally-better-than-Taco-Bell food truck—Maroni’s menu includes naan-wiches with ingredients like slow roast lamb, smoked salmon and baby greens. It’s a twenty-first-century operation; Maroni tweets his location or you can check out upcoming locations (and his menu) online.

On Friday, Maroni sold out in an hour and a half at Millennium Park. The next day, his truck, nicknamed Dorthy, was cranky in the morning, but once she got going, she could hardly stop—the Gaztro-Wagon hit up Lincoln Square, the Southport corridor and the Wicker Park Fest, where they just about sold out before heading home.

Although Maroni’s already hit the streets, he’s not ready to quit advocating for food vendors. “I know a lot of people started thinking about the idea and got to the red tape and were like, ‘Oh, I can’t do that here’,” he says. But out of a job with a degree in hotel and restaurant management, Maroni realized he had the time and skills to change things. “I don’t really get caught up in politics, that’s not my schtick, but this has political all over it,” says Maroni, who delved deep into Chicago law books for five months to draft a thirty-page “model ordinance” he hopes will make it through Chicago legislature in the near future.

Maroni says legalizing mobile cooking and preparation goes beyond the Gaztro-Wagon. He’s excited about the gourmet food truck trend, but he says he’s also working with vendors who have been advocating for fresh street food for years. “It’s something that can get people back into jobs and grow their own businesses with less start-up costs than a restaurant,” says Maroni. “It’s a public support thing.” (Ella Christoph)

Check out the Gaztro-Wagon’s schedule at gaztro-wagon.com, follow its Twitter feed, wherezthewagon, or chow down at the immobile wagon at 5973 North Clark.