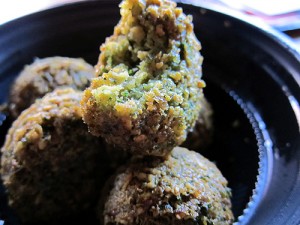 Barbara Eden was my first MILF. Well, maybe, more like my first MILK (mother I’d like to kiss), since I’d first spied her pink-tasseled loveliness in the mid-eighties on WGN when I was nine years old. I hardly knew of carnal pleasures, much less dropped the f-bomb in those days. Not only did I not know about sex, I didn’t understand syndication. I still remember being confused about how Larry Hagman was a dashing young astronaut one day and this gray-haired oil tycoon the next (my mom, like most moms of the day, had a serious addiction to aerobics, spandex tights and “Dallas”).

What I knew is that when Eden pursed her lips, pressed her palms together and did a pseudo-exotic sashay across my parents’ hulking Zenith and called J.R. Ewing ‘master’, I was smitten. While some of my peers hovered saucer-eyed in ramshackle clubhouses over torn abandoned Playboys, I relished a daily ration of “I Dream of Jeannie” from the black velvet love seat with the mirrored arms in my folks’ living room.

And so how could I not check out a Loop lunch spot named I Dream of Falafel. Well, actually pretty easily, as it took me a year, and the opening of a second location of the Mediterranean spot to finally get over there.

I don’t know what it is about quick-service food franchises, but like nearby Epic Burger and Chutney Joe’s, I Dream of Falafel has a very serious commitment to the color orange. Also like Epic Burger, there’s a nod to mid-century-modern design including some nice George Nelson/Herman Miller-style graphic work on the awning and some Eero Saarinen-inspired plastic chairs.

Despite the clean modern lines, the kitchen, with its three rotating spits of beef and chicken shawerma (such spits are like the food writer equivalent of a bug zapper, their sputter and sizzle as cajoling as the purple fluorescent killing light is to a moth) is doing things old-school. 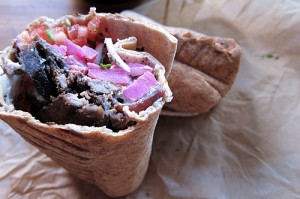 While the beef here features a decent sweet allspice note, a crunchy char and is probably one of the better Loop shawermas, it’s a little over-cooked. I prefer little bits of pink medium-medium rare bits as served at the best spots on Kedzie. The chicken, succulent and spicy has nice integrity, and is my favorite of the spit-roasted meats at I Dream of Falafel. The “Lebanese roll” enwrapping the meat has a smattering of grill marks and ample spring. While better than average, it’s not superior to the fresh-baked lavosh from Zaytune in Bridgeport.

But, as the name implies, they do not dream of meat or bread here, just deep-fried chickpea balls, and I understand why, for the mahogany-brown crust on these babies is nutty and cereal-like, their insides tender, fluffy and puffing with cumin and coriander steam. The falafel at I Dream of Falafel holds its own against my other Loop favorite, Oasis Café, tucked in behind the jewelry counters off Wabash. The falafel at I Dream of Falafel is much better than Falafill’s, the other burgeoning local falafel chain whose legume balls I’ve relished.

At two-to-three bucks a pop, the generous bowls of hummus, baba ganoujeh and tabbouleh are the real value. The smoky peaty quality of the baba ganoujeh or eggplant spread is haunting and would make the perfect food pairing for a glass of Laphroaig Scotch. The hummus is lemony, velvety smooth and larded with a hefty dose of creamy sesame-perfumed tahini. Instead of dropping four or five bucks for a stabilized tub of the stuff at Whole Foods, you’re better off making a stop at I Dream of Falafel after work for takeout.

If you stop during the day, you definitely want to get there before noon or after one, otherwise the line you’ll encounter will rival the queue for free beer at a U of I frat-house. Though I like the food, there’s still a sad quality to I Dream of Falafel, a sort of impersonal slopped-out serving approach. The guys behind the counter, unlike the super-freaky happy clerks at Trader Joe’s, look like they want to be somewhere else. I prefer the gregarious pomp and bazaar-like buzz of the Middle-Eastern spots on Kedzie, and I’m kind of thankful I’m not tied to the Loop for my falafel needs.

Still, joy from your food preparer is not a right. I Dream of Falafel is probably in the top 10 percent of Loop lunch options. If you really need to be entertained, there’s a DVD of the complete series of a certain show about a hot genie I can point you to.