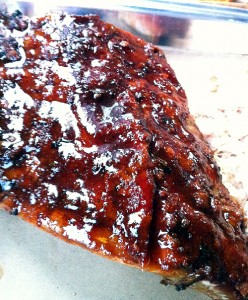 The 1800 block of North Avenue is turning into the Lynyrd Skynyrd junction. On one side, you’ve got chef Cary Taylor serving up corn-perfumed johnnycakes and fried green tomatoes at The Southern, while across the street you’ll find Charlie McKenna, formerly of Tru and Avenues, serving up boiled peanuts and smoked ribs at the new Lillie’s Q.

Though, I suppose the rockers from Jacksonville, Florida would probably take issue with that moniker, for they probably never got their pulled pork from a fancy brick-and-wood artist’s-loft-like bar with plasma screens on continuous “ESPN SportsCenter” loop, as at Lillie’s. But, then again, does one really need concrete, chipped paint, and a lack of air conditioning to serve true tasty southern treats anyway?

Just in case, McKenna’s hedging his bets. Though his new Wicker Park BBQ spot skews more boite than shack, he’s still keepin’ it real by serving his smoky treats on prison-worthy metal trays. Likewise, though he’s trained as an upscale chef, he’s also a nomadic BBQ competition-circuit traveler and pork shoulder prize winner at the 2007 Memphis in May World Championship Barbecue Cooking Contest, aka the Super Bowl of Smoke. Though he’s serving small-batch moonshine from a fancy copper still, it comes from Belmont Farms made by a dude named Chuck Miller who’s a lot closer to Uncle Jesse from the “Dukes of Hazzard” than all the born-again hipsters making “white whiskey” north of the Mason-Dixon line.

Thing is, ambiguity or duality is fine if you want to be the next Lady Gaga, but it’s not so great if you want to be the next BBQ king. In the ‘que world, you’re really only as good as your last rack. People made fun of Barry Sorkin, the Jewish white kid from the North Side, the Eminem of Chicago BBQ, and chef/partner at Smoque for eschewing a manual rig in favor of a consistent automated Southern Pride cooker. But that seems to have worked out okay, after all.

McKenna smokes his goodies in a DW Kountry Cooker, a gravity-fed system that’s supposedly so efficient he doesn’t have to move his meat around to cook it evenly. What he does have to do is pay attention to cooking time. And right now Rolex or Omega he is not. For on separate visits, his ribs have ranged from mushy-skinned baby food slathered with sweet glaze to dry tough jerky. Likewise his tri-tip, which has been drool-worthy for the most discerning Gibsons expense-accounter, tender and pinker than a Barbie Dream House, has also been grayish and as leathery as the Crypt Keeper. Cheesy light grits are golden, but the accompanying pond of grease and rubbery shrimp sink the whole dish to pyrite status. If Sorkin is Eminem, then McKenna might be more like Em’s unreliable alter-ego, Slim Shady. And to that, I say, “Will the real smoke daddy, please stand up?”

I suspect in the end, McKenna’s more early Marshall Mathers than throwaway “Relapse”-era Shady, for there’s no ambiguity about his pulled pork or his chicken, brined to the heavens and juicier than a pack of Fruit Stripe gum. You won’t find better fried pickles in Chicago. The tempura-battered dills (made with a house beer from Metropolitan Brewing) represent a southern-Japanese fusion of sorts, a cowboy-ninja style treat. 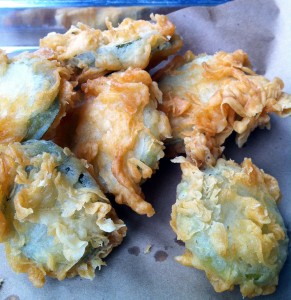 I think the problem at Lillie’s is it’s a tough transition from BBQ competition to restaurant repetition. As McKenna said, in a recent interview, of BBQ competition, “you’re just babying five racks of ribs all night.” When you’re in the restaurant business, you’re more like Jim Bob Duggar (“19 Kids & Counting”—TLC—don’t waste your time watching). You got a lot of recalcitrant piglets to raise in a short amount of time. Best to break out the switch and make sure they all stay in line.

Though where there’s a stick, there should always be a carrot. McKenna’s velvety banana pudding topped with a cumulonimbus cluster of meringue, a banana cream pie by any other name, definitely tempers the sting of any inconsistency.

I found the fried pickles to be fairly terrible. The batter was lovely, but fell apart with the first bite, and the pickles were sliced far too thick. And really, 6 too-thick pickle chips for $5? Come-the-fuck-on. That gets you an enormous basket of vastly superior fried pickles at any of Mike Mills’ downstate joints, if we’re comparing MIM winners.

I thought the rest of the food was pretty good, though.