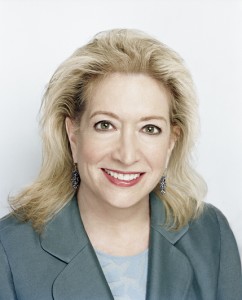 The high-end food festival Chicago Gourmet takes place this year over the course of two days, September 25-26, in Millennium Park (along with a “Hamburger Hop” on September 24) and about a hundred of the area’s most celebrated restaurants and wine makers will be represented. Title sponsor Bon Appétit magazine will be heavily involved in the activities; we spoke with editor-in-chief Barbara Fairchild about their plans and her take on Chicago. A trained journalist, Fairchild knows a little bit about the type of work ethic Chicagoans pride themselves on. After graduating with a Bachelor of Fine Arts in Journalism from California State University Northridge, she went straight to work for food and travel magazine Carte Blanche as an editorial assistant. In 1978, Fairchild joined Bon Appétit magazine as an editorial assistant; within seven years, she was executive editor. In 2000, she was named editor-in-chief. During her tenure at the magazine, Bon Appétit has been awarded three James Beard Foundation awards on its way to becoming the surviving Conde Nast food title when Gourmet folded in 2009. Fairchild authored the “The Bon Appétit Cookbook,” and published “The Bon Appétit Fast Easy Fresh Cookbook” with a “Bon Appétit Desserts Cookbook” scheduled for November 2010.

What makes Chicago Gourmet 2010 an interesting and worthwhile event?

I think what is great about this particular event is the sheer number and quality of the restaurants involved. There will be over a hundred of what, really, are the top restaurants in the Chicago area. And what I love about Chicago restaurants, and events like this one, in particular, is that all of the chefs are really there in Chicago. This isn’t an event where there is a restaurateur who has five other restaurants elsewhere and is barely involved with the local community. What I find also sets Chicago apart from many other places, in a lot of ways, is the fact that the chefs are not only committed to their craft but to their communities and cities at large. I also have to say that I’m also impressed by Mayor Daley’s commitment to and very impressive knowledge of the restaurant scene.

What can people expect out of this event?

What we are going to do is have a Bon Appétit marketplace tent that is physically on the grounds of Millennium Park, along with all the restaurants and the other people who are going to be on display there. I’m going to be there along with Andrew Knowlton, our restaurant editor, and Cat Cora, who is our wonderful executive chef as well as a big star in her own right. We will all be there to meet and greet, we will all be there for special seminars and cooking demonstrations and tastings in our own way.

Do you still get a kick out of cooking demos and tastings?

Oh, I love doing it. First of all, why I love doing it still is because I get to meet the readers. And that is very important to me because it’s easy to sit at the desk every day and put out the magazine and work on the website and coordinate and plan all of the other platforms that we are involved in now and going to be involved with in the future, but really getting out and meeting the chefs and the readers at events like this is still a thrill for me. I like hearing what they like and I like hearing what they don’t like because it helps us plan issues in the future. And we’ve always had a huge, supportive base in the Chicago area. And the people there have just been wonderful to me personally on our cookbook tours and always very responsive to what we do in the magazine.

Have you noticed readers, not even from Chicago, expressing more interest about some of the restaurants in Chicago given that more and more of our chefs are getting on television and receiving national coverage?

Definitely. I think what is happening in Chicago is what is happening in many instances in places around the country like Las Vegas and San Francisco, where people often travel on business. It is becoming more important to even business travelers to know great places to eat because I feel that a lot of times a great meal is a great way to top off a great business meeting. With the higher visibility of the chefs, we are, in our September restaurant issue once again, picking the top ten new restaurants in America and one of them is in Chicago (The Purple Pig). We can help show Chicago as a great place to go out. Don’t think of it as just a business-meeting town.

I know you feel strongly about Bon Appétit being based in Los Angeles, part of the reason being that you believe that Californians impart a different perspective on things than magazines based in New York.

I think that, ironically, chefs appreciate that we are based in the West. I think that chefs realize that that informs not only how we approach food, but also what our voice is as a magazine. I think that chefs also realize that it gives us a very broad perspective across the entire country. My own feeling is that it makes us open to a lot of other places in the country where the food is excellent and the restaurant scene is exciting.

You were in Chicago for the announcement press conference this summer. Where did you eat?

I went to The Gage, which I thought was fantastic. And I have to say, if I lived in Chicago, I’d be there three nights a week. I thought the food was great, the atmosphere was fantastic. I loved the scope of the menu—that you could get something very casual like fish and chips or something with a little bit more seriousness and depth to it, and that all of it was done very well. That is very rare. I just thought that they did a great job.

Have you had occasion to go to really casual places in Chicago? And not like the Publican or Frontera Grill casual, as great as those places are, I mean a really cheap and casual neighborhood place?

Not yet in Chicago. In LA and New York I have, of course. In fact, in the September restaurant issue, we do a whole story on what we call delicious cheap eats in Chicago. So we do cover a lot of the taco places and the sandwich places and the delis that make Chicago such a great place for eating out inexpensively and it kind of goes back to what I was talking about it as a tourist destination. If you are coming to Chicago and you are with a family, don’t think that you can’t eat well even if you are on a budget because there are these places. We have ten places and they are all fantastic. 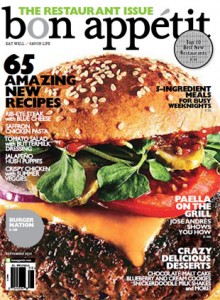 Bon Appétit does a good job of balancing attention to restaurants with do-it-yourself recipes, but do you feel there is a conflict between eating out and cooking for oneself? Do regular people get excited about what they see in restaurants and then go home and feel empowered to try it or do you think it discourages home cooking?

I think it excites them to see it in a magazine like Bon Appétit because they know we’ve tested all of the recipes and that we have the expertise of the test-kitchen behind the recipes. So I think it encourages people to maybe try one of those dishes for a Saturday night dinner party or for fun, to see if they can do it. I don’t personally think that we present anything in the September restaurant issue that is super challenging or out of the abilities of a wide-range of cooks. But I know that people can be intimidated when they see the word “chef” or the word “restaurant” in front of a recipe.

And something that we’ve done, especially in the last five years, is show people that “restaurant dining” means a lot of different things these days. It can mean anything from an excellent taco off of a cart or a truck as much as it means the best thing you can eat at Alinea or something like that. There are a lot of different definitions of restaurants these days, and they are all great. It’s what makes the scene so exciting.