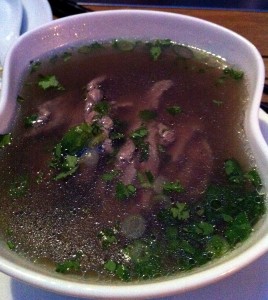 Unless you’re a Pritzker, a Zell, a Wrigley or a Winfrey, or a member of any of the other handful of elite Chicago clans, living in the city usually means making some compromises.

If you just graduated from college, you’re apparently forced to live in Wrigleyville and wallpaper your third-floor walk-up with “Twilight” and Lady Gaga posters. The good news is you now have a job and no longer have to buy Natural Light. The bad news is your rent is more than your mortgage will be in a few years, so you can only afford to trade up to Miller Lite.

If you live in certain places on the South Side and you want a farmers market, a venti latte, and the promise of no random drive-by shootings, you’re generally screwed. However, you do have more Harold’s Chicken franchises than most, not to mention a pretty good selection of BBQ joints.

If you’re a cop or a fireman, you’ve probably got a nice bungalow on a tree-lined street on the Far West or South Sides. The bad news is airplanes are roaring over your home all night and the only bars you can find are fake Irish-pub/Bennigan’s clones.

For those of us in the shrinking middle class, this often means living on the Near West or Near South Side on streets that contain urban pioneers bedding down in cop bungalows with Frank Gehry-esque additions, Latin King clubhouses and condos filled with lamb-chop-sideburn-wearing bike messengers. The good thing is you have an organic coffeehouse nearby where you can all hang out together in perfect harmony.

Heck, even the wealthy people in Chicago who aren’t members of a dynasty have to make some cuts. They’re often confined to building new houses on quarter-acre lots which already have reasonably nice million-dollar Victorians and Georgian homes on them that must be knocked down. These rich people clearly don’t have the budget to hire good architects, for every one of them seems to build the same blocky nouveau-castle-like greystone McMansion.

This is a long way of saying we all have our personal gentrification fantasies. I did not pioneer the West Loop back when flophouses, burlesques and crack-ho’s were king, but I did make it here before there was much retail, an industrial crane hoisting a high-rise on every block and any kind of food that wasn’t Greek. In the last few years, I have gotten my own nearby Whole Foods, Home Depot, Best Buy, Target, po-boy shack, Indian/Pakistani joint and legitimately awesome restaurant (Girl and the Goat). Just last week, at the corner of Adams and Peoria, I got my own park. Still missing: great pho, aka Vietnamese noodle soup and Trader Joe’s.

Attempting to ameliorate the first problem, Sawtooth, a new upscale Vietnamese spot on West Randolph, opened in the old Saltaus space. Though I like the room, it may be that the owner is a former interior designer, because his aesthetic, which includes sleek angular white walls, glass, walnut woods and an army of orange Eames-style plastic Herman Miller chairs, seems like it was cribbed from the Design Within Reach (which, as a seller of $8,000 sofas makes it the worst-named furniture store of all time) catalog. 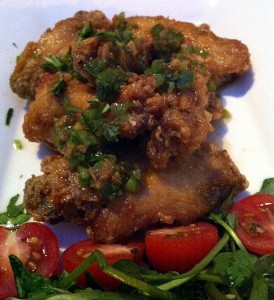 There are also a few original touches at Sawtooth I dig. Nader Salti, the full-time surgeon who opened Saltaus, deserves props for the magnificent outdoor dining pavilion—like a Big Star patio for scenesters—he bequeathed to the current owners.

I also like the wall of “lucky bamboo” on the north end of the dining room. According to Chinese folklore, the number of bamboo stalks displayed has meaning (five=wealth, six=health for example). There’s about thirty or more here. I’m not sure what that portends, but based on my meal it could mean something about being destined to serve a lot of well-cooked dishes that seem to be missing sauce.

Succulent jumbo prawns stuffed into a hollowed-out pineapple and showered with a crispy dust of garlic and scallion need a dash of lime or a sweet-spicy sauce to offset the dryness of the crumb. Likewise eggplant with a haunting note of smoke and a nice crunchy layer of crushed peanuts is somehow missing the funk of promised lime-fish sauce. Roasted quail with a spice-rubbed crackling skin and moist flesh is spatchcocked (fancy culinary term for spread-eagled), almost begging for a splash of something.

The crispy-skinned chicken wings, smothered in a yin-yang sweet-spicy garlic sauce, are perfect, but then again, ordering chicken wings in a fancy Asian spot feels like going to Hooters and asking for an order of spring rolls.

But, what of the pho? The broth, like the best versions on Argyle, has a nice beefy tea-like quality. The requisite side plates of lime, bean sprouts, Asian basil, plum and Sriracha are also spot-on. Gone are the interesting textural contrasts of spongy tendon meatballs and the slightly chewy bits of honeycomb tripe in favor of shaved slices of filet mignon. This, of course, is a waste of filet, which should always be pink in the middle. Using it is a bit of a gimmick and makes the bowl price ($10) about forty-percent higher than what you’d find elsewhere. That’s why most spots use tender, but value-priced, eye of round. Admittedly the Pho Bo is a good starter-level bowl for those who would eschew organ meat. It’s just not enough to satisfy a West Loop gourmand’s gentrification dream.