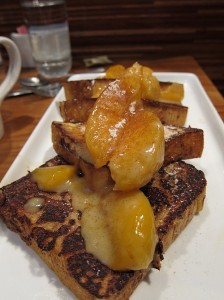 On December 8, 1967 at the Memphis recording studios of Stax Records, Otis Redding didn’t have a lyric written for the last verse of his newest song, so he improvised and whistled a few bars, planning to return to the studio again to finish. Two days later he died in a plane crash outside of Madison, Wisconsin, his body recovered from Lake Monona. Redding’s partner and lyricist, Steve Cropper, went to the studio right after the crash, finished up the recording, preserved the whistling as an outro and launched Redding’s biggest hit, “Sittin’ on the Dock of the Bay” on Stax record’s Volt label.

In 1965, at the Lorraine Motel in Memphis, where three years later Dr. Martin Luther King would be shot, Wilson Pickett and Cropper wrote a little ditty called “In the Midnight Hour.” They also recorded it at the Memphis studios of Stax, releasing the album on Atlantic Records.

Just as suburban kids found Chess Records’ Chuck Berry through the Beatles in the sixties or Muddy Waters in the seventies via the idolatry of the Rolling Stones and thievery of Led Zeppelin, I’d discovered Stax greatest soul men growing up in the eighties through white culture.

I came across Redding on the soundtrack of the 1989 Coreys’ (Feldman and Haim-RIP ) flick “Dream a Little Dream,” crooning the plaintive “I’ve Got Dreams to Remember.” It didn’t take me long to dig up “Dock of the Bay” with its crashing waves and seagull calls. Even though I was 12, I’d just broken up with the girl who I’d first kissed and who I’d “gone with.” I’m not sure where we were going, but it was over and, insufferably hip little sixth grader that I was, I somehow felt weary enough to relate to Redding’s “sittin’ here resting my bones” living with a “loneliness won’t leave me alone.”

Though I’d probably heard “In the Midnight Hour” a hundred times before the early nineties, I never paid much attention till I saw Andrew Strong, a white Irish dude belting it out as Deco Cuffe, the fictional lead singer of The Commitments in the film adaptation of Roddy Doyle’s book of the same name. The joy of watching Cuffe and his Dublin mates working the slides on glinting trombones and trumpets, swaying and stomping, showed me a joy I’d surely never had, but that I wanted real bad.

Though I was a child of the compact disc, Redding and Pickett’s wails, the kind that embed a lump in your throat and daggers of sadness in your head, as much or more than anyone, led to my current vinyl-collecting addiction.

Stax came in to my life then, and now it has again, though this time, as a breakfast and lunch spot, the Stax Café, on Taylor Street in Little Italy. Its prime soul man is chef Chris Barron, veteran of Park 52, Red Light, Opera and Market. Barron and his wife Jill (chef/partner of Mana) have one of the biggest and baddest velvet-painting collections in Chicago, covering pretty much at least half of every square inch of wall space in their Logan Square condo. Maybe my favorite thing about Barron, though, is the annual costume-required Thanksgiving blowouts (plaid bondage, black leather and leopard print are all past Pilgrim-ideal-threatening themes they’ve explored) he and Jill throw for their extended family—a band of chefs, motorcyclists and tattoo artists.

I wrote an article about the feast a few years ago, and ironically, Stax Café’s young owner Spiro Tsaldaris told me one of the reason’s he knew about Barron was that he’d read that piece and was intrigued. So, maybe for the first time in my career, if you love or hate your experience at a restaurant, in some small way you can directly blame me. 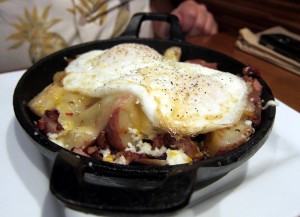 Though, frankly I’m happy to take full responsibility, because Barron is a pro. Stax is easily as good or better than the excellent Meli Café in Greektown and one of Chicago’s best new breakfast spots. Ricotta cakes are fluffy sweet pancake clouds studded with tangy sweet dollops of rhubarb compote. The Lumberjack skillet, filled with a mélange of ham, bacon, chicken apple sausage and hearty redskin potatoes blanketed by an oozy bubbling roof of cheddar and pepperjack cheese and a duo of rich poached eggs will put so much hair on your chest you might turn into Teen Wolf. I basically stole the thick nutmeg-and-cinnamon-custard-soaked Texas-thick brioche French toast covered in a mess of succulent peaches my mother-in-law ordered when she wasn’t looking.

Juices are hand-squeezed at Stax, though they are also the source of my only issue with the place. The cranberry-orange-juice special was made up of hand-squeezed OJ and Ocean Spray cranberry poured from the bottle. While the glass was large and the price reflected what you pay for a small glass of the OJ, it’s a fake value. Though it wasn’t bad, if I’d known they weren’t juicing fresh cranberries, I wouldn’t have ordered it.

I would however order the green chili chilaquiles—fresh corn tortilla chips muddled with a cloud of scrambled eggs, creamy black beans, spicy green chili salsa and tangy bursts of queso fresco, sour cream and freshly diced pico de gallo. For if you wait till the midnight hour to do your carousing or that’s when you let your love come tumbling down, I can think of no better restorative the morning after.

Fun fact: It took a 600+-words transition statement for you to actually review the food. You spent 200 words on that.

If you want to read laundry list descriptions and plate by plate breakdowns – you have plenty of options in this city for your food reviews. May I suggest Pat Bruno?