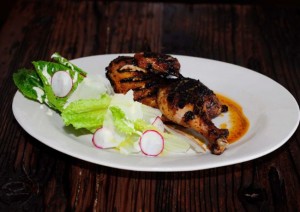 Anyone who’s seen “The Godfather” or watched an episode or two of “The Sopranos” knows that people like to send messages at Italian restaurants. So what’s a food writer to think when a food runner at the new Davanti Enoteca in Little Italy “accidentally” tips a full glass of Chianti into his lap and all over his brand new white Puma tennis shoes?

I mean I wasn’t worried I was gonna get whacked. This is Taylor Street, Chicago. The worst thing that happens around here is that Oscar DeAngelo, the unofficial mayor of Little Italy, will yell at you at a community policing meeting.

I was concerned however, that maybe I’d been made, that the affable owner, Scott Harris (Mia Francesca, Purple Pig), holding court at the bar made from 180-year-old refurbished barn wood and lit by the glint from a medieval-looking metal-cart-wheel-like lantern, was on to me and wanted to let me know that maybe he didn’t like my pan of his Neapolitan pizza joint, Nella, a few months ago.

The truth is, though I had to eat the rest of my meal with a soggy crotch emanating a bouquet of blackberry and tobacco, I was kinda happy, for this meant my anonymity was probably intact. Even as insignificant as my critical voice is in the age of Yelp, I know even the most vengeful owners probably wouldn’t go so far as to attack me during the first few weeks after opening a new restaurant.

To Davanti’s credit, they did everything right, offering another glass of wine and to pay my dry-cleaning bill, and even comping dessert. More importantly, they served up some damn good food. Which is to say, as long as the risotto is al dente and the pork belly crispy, you can spill anything you want in my lap and probably get away with it.

Whipped ricotta infused with honeycomb, which I slathered on a smoky char-grilled piece of rustic farm bread, is maybe the closest I’ve been to eating a cloud.

And then there are the eggs. Outside of Davanti Enoteca’s menu, I haven’t seen this many raw yolks being consumed since Arnold Schwarzenegger was training for Mr. Olympia. There’s one on the excellent risotto carbonara studded with luscious pancetta and sweet peas. There’s one on the Texas-thick toast dripping with Fontina and the funk of truffle oil. The best use of a raw egg, however, is when it gets breached and spread over wafer-thin bits of roast potato, pork belly, scallion and a creamy asiago béchamel sauce on the pizza della Fattoria, which is better than any pie I’ve had at Nella.

The uovo in Raviolo “San Domenico,” a giant ravioli stuffed with, yep, an egg, recalls the similar iconic dish offered at Schwa, though Davanti’s, which is crusted in parmigiano, might just have the local edge.

One of the few dishes that doesn’t sport an egg is the Pollo Sole Mio, a grilled half chicken rubbed with chili paste accompanied by a radish-flecked Caesar salad. The dish, a nod to Dennis Terczak’s long-shuttered Sole Mio restaurant, which was one of the better Italian joints in Chicago in its day, is arguably one of the best chickens, along with Rob Levitt’s roast version at Mado, that I’ve eaten in the last few years.

Not everything is perfect. The cannoli sundae has far too much crispy cannoli shell and not nearly enough sweet chocolate chip, pistachio and candied-orange-peel-studded ricotta.

I don’t really like that the Davanti wine list is printed and affixed to an empty large-format bottle of wine that, unless you’ve been pumping iron like Arnold, makes the menu hard to pass around the table. The good news though, is if you’re a klutz and you happen to spill any wine on your companions, or on yourself, the tariff on every selection is retail plus a $7 corkage fee, making this one of the fairest-priced wine lists in the city.