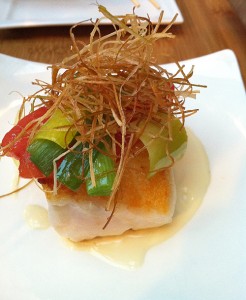 The contemplation of the cut, the hand to the knife, the flaying of flesh—this is his profession. Stealthy like a ninja, discreet like a geisha, and eviscerating like a samurai—he will be, is, what the fillet requires. Watching toro ribbon beneath his blade, the word “rote” comes to mind. But, that’s wrong. Though repetition and study have yielded to mastery, he acts as though he has mastered nothing. Each slice is treated like his first.

He would be an apt recruit for a king’s court, the man who tests for poison. Though he mixed the soy sauce a minute ago before dabbing it on a triangle of fluke, he tastes it again before flavoring a second piece. You never know. Something could fall from the ceiling. The sauce might evaporate and get too salty. Each piece tastes like the one before it.

He walks from his station, leaving his forged steel knife behind. A man sitting at the bar says he collects knives and asks the chef’s assistant if he could see it. The assistant rejects the patron’s request. The man at the bar pleads. The assistant looks around and lifts the knife so the patron can get a closer look. He sets it down again.

The chef returns and appraises his station. A mask of violation creeps across his face. He whispers, “Who touched my knife?” The assistant bows in shame, but there is no reprisal. The chef waves him off, smiles at his customers and continues cutting.

This sushi chef is Mr. Miyagi, trapping flies with chopsticks. I can’t abide the silence. I ask him how he knew? “I always put my knife down in the same direction.” It’s not complicated, but it is not simple. Discipline rarely is.

A favorite sushi chef is always partly a matter of personal opinion, and this attention to detail is why Chef Byung Kyu Park is mine. It is also why on my tenth wedding anniversary, though I could dine at L20 or Spiaggia, I choose to celebrate at Park’s new place in West Town, Arami.

Park goes by the moniker “BK.” I am reluctant to use that nickname, for the only thing he has in common with the home of the flame-broiled Whopper is that he is a king among sushi serfs.

And, yes, he’s Korean. This is sometimes an important distinction. As distinguished food writer Jonathan Gold writes in his book “Counter Intelligence,” “Japanese sushi is moderately proportioned. Korean sushi is served in generous, truck driver slabs.” Watch BK transform the pulchritude of an octopus tentacle into a delicate scrim and you will know his spirit is decidedly Japanese. 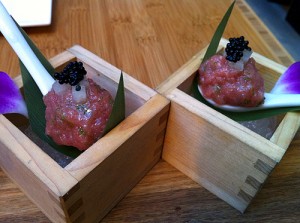 Go omakase and the progression of courses BK serves will be as balanced and smart as a tasting menu from Thomas Keller. If you’ve ever had the French Laundry’s salmon coronet, you will recognize its Asian cousin, BK’s umami bomb appetizer: a spoon of glistening toro tartar draped in a heaping of caviar and chive. Zuke sake, soy-marinated salmon, raw in the center, but cured with a crust that feels steamed yet tastes caramelized, is like an entrée. There is even dessert-like sushi marinated in sweet mirin. There is no reconstituted green powder at Arami. Wasabi is grated fresh and ginger is pickled on the premises.

Though we have brought a split of Krug to toast our fortune, my wife and I hardly care that we’re experiencing one of the best Champagnes in the world. We are too busy gnashing at spicy octopus maki, whose fieriness is tempered by the sweet coolness of Fuji apple dressing. The rice on these rolls is a middle finger to glutinous globs served elsewhere. BK’s grains are distinct, smooth and slightly firm, like tiny polished gems.

Frank Lloyd Wright built furniture into his homes to “client-proof” his designs, to ensure his lines weren’t marred by a buyer’s gaudy taste in sofas. BK has a little of that spirit. The sauce bowls at Arami hold large black stones that prevent patrons from drowning their fish in soy. BK’s nigiri, silky light tuna piggybacked by monkfish “foie gras,” is so balanced he can remove the whole bottle of sauce from the table without reprisal. 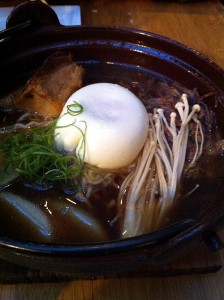 Arami is not all sushi. The rock/plant garden in front and the clean-lined dining room (a conflagration of honeyed woods and pistachio greens) feel like they’ve been pimp-slapped by the hand of Feng Shui. There’s a huge photo of a verdant clearing and towering trees on one wall. It looks like it was shot on the Ewoks’ home planet of Endor (which was actually a redwood grove in California), a spot where a Jedi master might bump into zen sushi master.

The ramen, featuring pliant noodles, a baseball-sized poached egg, house pickles, crispy organic pork belly with a tinge of back-end skunky-weed-like funk (a hallmark of real tasty pig) and a beefy tea-like broth, is some of the best in Chicago.

A flaky slab of cod seared golden and served rare in the middle crowned with a melting tomato confit and a ragout of lemongrass and “fizzled” leeks is like the love child of Paul Kahan’s cooking at Blackbird and early Nobu Matsuhisa.

I do not give stars in these columns, because they’re reductive and allow a reader a shortcut to avoid reading about a restaurant experience. That being said, Arami is one of my favorite new restaurants in Chicago. I don’t care if you read this. I just want you to go. So, for those who might be alumni of the Derek Zoolander School for Kids Who Can’t Read Good: Arami, and its master sushi chef undoubtedly score four stars, chopsticks, soy sauce packets or whatever you prefer.