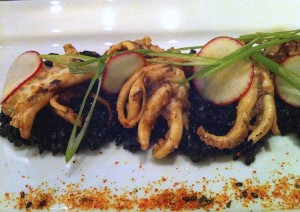 A.A. Gill is not a nice guy. Over his career as a restaurant critic for “The Sunday Times,” a UK newspaper, he has offended gays, Germans and the Welsh. He was once thrown out of a Gordon Ramsay restaurant because he’d written that the sauté-Satan of TV’s “Hell’s Kitchen” was a “second-rate human being.” In one review Gill decried the citizens of the Isle of Man as “hopeless inbred mouth-breathers.” Still, when it comes to food criticism, Gill, as foul and hard as a writer can be, has nothing on my boy.

When last I wrote of my son’s food adventures, he was a grinning eight-month-old happily gnawing pieces of Manny’s pastrami, one of the first solid foods we’d ever given him. We thought we’d hit the jackpot. The kid sucked up ratatouille, curried cauliflower and purees of organic vegetables I’d dutifully procured from the farmers’ market. Pretty soon, I figured we’d have him on to sushi and Indian. By age two maybe we’d convince Alinea to serve him a five-course toddler pre-fixe. He was a foodie. It was ordained.

One thing they don’t tell you in the baby books is that most kids between six months and a year-and-a-half will pretty much eat anything. Put a bowl of foie and black truffles in front of the average one-year-old and they’ll probably gum up a storm.

The other thing they don’t tell you in the baby books is that somewhere around age two toddlers aren’t just terrible. Sometimes they’re a-holes. For those of you who have yet to procreate and think I’m the worst human being on the planet, imagine if somehow supermodel Naomi Campbell, the Real Housewives of Atlanta, and the girls from “Jersey Shore” had a test-tube teenager. That would be about 75 percent of how cranky, petulant, selfish and whiny a small child can sometimes get. To be fair, most of the time, raising a child is rewarding, and as the pre-rock-cocaine-smoking Whitney Houston once warbled, a child’s attention is the “Greatest Love of All.” The rest of the time my wife and I refer to our three-year-old as he who must not be named, especially around the dinner table. He throws food. He screams at his plate and he hates pizza. Yes.

My son’s eating precocity has been squandered. He is now the Anna Kournikova of once promising young eaters. Back in the pastrami days I envisioned writing a book, “Fridays with Grayson” (apologies to Mitch Albom) whereby I’d document my son’s weekly introductions to great Chicago eats. If I were to write that book today, it would be a one-page list of white foods: rice, noodles and bread.

Then, a few weeks ago, something miraculous happened. My son discovered pork belly Bánh Bao at Saigon Sisters, a new upscale Vietnamese spot in the West Loop. I figured he’d dig the bao. After all it was warm, sweet and pillowy. And he did. Then I fed him some hoisin-glazed pork belly. He ate it. Then I broke off a piece of luscious duck confit from my banh mi. He sucked it up. We returned a week later and he slurped up anise-perfumed pho broth glazed noodles. The fussy critic approved.

I concur with his assessment, and not just because Saigon Sisters has alleviated my son’s starvation diet. It hasn’t. He’s returned to eating mostly white stuff. Rather, I, who shove everything in my mouth as a matter of profession, can’t stop thinking about those pork buns. Nor, can I stop foaming over the caramel-lacquered chicken wings studded with lemongrass, ginger and chili, or the sugar-cane-skewered lobster fritters, aka fish donuts, drizzled with a tart lime-ginger sauce, the Vietnamese answer to Japanese ponzu.

I dream of Saigon Sister’s tender confited baby octopus splayed over black-cuttlefish-ink-infused-rice spiced with a fiery dust of togarashi spice. It’s a Catalan, Japanese, Vietnamese mash-up of sorts, and the best octopi I’ve eaten in Chicago. 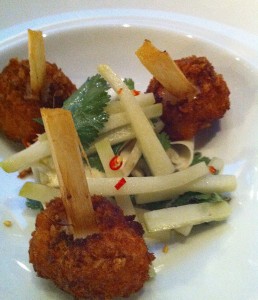 And then, there’s the Op La, a plate of over-easy eggs, funky Chinese sausage, thick slices of pork belly and a gyro-textured-like Vietnamese pork swaddled in a nest of caramelized onion hit with some Maggi sauce (liquid umami, aka MSG) served with crusty hunks of French bread. This is Vietnam’s answer to Alsace’s choucroute garnie. It may also be the single greatest plate for feeding drunken Chicagoans since Diner Grill’s Slinger.

During the day, Saigon Sisters is a boisterous mess hall for Loop lawyers and CTA employees. At night, with its wood-slat banquettes, flickering candlelight and the low rumble from the Lake Street elevated train overhead, the restaurant feels like a secret Hopperesque dining room for lonely hearts. Oh, did I mention my waitress was one of the most attentive wait-people whose service I’ve enjoyed this year?

All is not perfect. The waygu beef bao needed a bigger spritz of lime to balance out the heavy coconut milk glaze. While the meats are pretty good, the pho broth could use a little more richness. And while I like the banh mi bread (it comes from Nhu Lan) I wish it was baked fresh in the Saigon Sisters’ kitchen, especially when you’re paying seven bucks a pop. On one visit there was a slightly stale crackle to my sandwich. Don’t take my word for it though. I know I’m right because though he enjoyed most of his meal, this was one of the few things a certain discriminating toddler refused to touch.

Every so often, you actually read a review from beginning to end. And then you add a restaurant to your MUST EAT list and make plans to get there as soon as possible. Such is it with your review of Saigon Sisters. Can’t wait to give this place a visit!