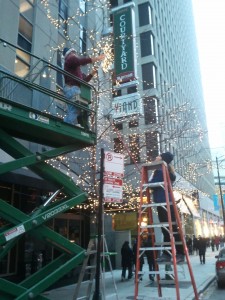 The holiday season officially kicks into high gear for Chicagoans this Saturday with the nineteenth annual Magnificent Mile Lights Festival. Every year, the Saturday before Thanksgiving, hundreds of thousands of spectators flock to Michigan Avenue to watch Mickey Mouse and Santa Claus lead a parade of furries and quasi-celebrities (past years have featured the likes of Kirk Cameron and Jamie Farr; this year look for the stars of Radio Disney) atop corporate-sponsored floats to light up the estimated one-million-plus Christmas tree lights along The Mag Mile. Next to Black Friday, it’s one of the busiest days of the year for the area; retailers will be unveiling their holiday window displays and extending their shopping hours in an attempt to get a jump on the early holiday shopping surge. It’s a huge day for the business community of the area—for the employees of those businesses though, it can be more of a mixed blessing.

“You have to be mentally prepared,” says Dave Zampillo, senior manager of The Grand Lux Cafe, a popular restaurant on Michigan Avenue (where I work when not writing). “You can’t come in cranky or hung-over or you’ll punch somebody in the face.”

The Grand Lux, a gargantuan second-story restaurant with windows that overlook Michigan Avenue, seats upwards of 500 guests, with seating along the windows for around just over fifty. Zampillo estimates that the night of the festival they’ll be a consistent 150-to-200-name wait, with anywhere from 2,000 to 2,500 people dining in throughout the course of the evening, with approximately all of them requesting window tables. That’s why the official policy the night of the festival is “no requests.” To hear Zampillo tell it, the parade does not exactly bring out the holiday spirit in everyone.

“People are crazy for those windows,” says Zampillo. “If you let them put up tents the night before to claim seats they’d be camped outside. If I were a man who was able to take bribes it would make my job worth it for a year. But you can’t—if someone sees you take special care of someone else they might kill you.” (Jonas Simon)