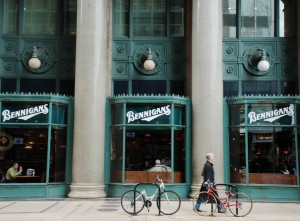 Note: The photos are not from the Bennigan's in this story, which is no longer in business./Photo: Kristine Sherred

There’s an odd sort of camaraderie that develops in certain work environments, not unlike between soldiers during times of war. Born out of shared suffering and hardship; you don’t find it in every job, but I’ve definitely found it in waiting tables. Part of it comes from banding together against a common enemy (the customer). Another part is being separated from “normal” society by the nature and hours of the job. For most waiters, our living is made at night and on weekends, i.e., the times when the rest of the world is off. Our weekends are Mondays and Tuesdays; our after-work drinks don’t start until 1am. But the real separation is felt during the holidays, when everyone else is enjoying the heart and hearth of home and you’re sharing your season with your co-workers, not your loved ones.

Don’t get me wrong, I’ve had some wonderful holidays with my various crews—Near Year’s Eve parties that, technically, didn’t start until a couple of hours into New Year’s Day, Christmas Day dinner in Chinatown followed by karaoke—but one that stands out was the Thanksgiving I spent at Bennigan’s in 2003.

Our staff was a diverse and somewhat motley assortment of individuals: musicians and college students, druggies and alcoholics, working moms and career servers. Chet was the lead singer of a not-half-bad power pop/emo group (I think they were called “The Effect”); Jennifer was a recent journalism grad from U of I writing part-time for a leftist internet zine; Viktor was a part-time drug dealer who may or may not have had ties to the Hungarian mafia (He would later be arrested—and deported—for scamming customers’ credit cards. He showed up to work one day and the FBI was waiting for him.); Tom had been behind the bar for more than half a decade with no plans beyond tomorrow night’s pub crawl; and Maria, our manager, was a single mom who made a three-hour round trip commute everyday from Rockford.

The good people at corporate, in their infinite wisdom, had decided that not only would we be open for Thanksgiving dinner that year, but that we would also be serving our very own “Bennigan’s Thanksgiving Platter.” For $12.95 you got a processed turkey breast (white meat only) with something resembling gravy, powdered mashed potatoes, stuffing (which had both the consistency and taste of a chopped-up cardboard mailer), frozen vegetables, and cranberry sauce straight from the can, which was pretty much the only thing about the meal that felt right.

Who exactly would be eating at a Bennigan’s for Thanksgiving dinner? Foreign tourists, and lots of ’em. Turns out Thanksgiving isn’t as big a deal in Germany or the U.K. as it is here in America. Who knew? It wasn’t like we were crazy busy or anything, but we weren’t dead either—we had enough business to keep us occupied and keep our minds off of all the places we’d rather be. Of course, with foreign tourists come foreign tips, which are usually on the lower end of the spectrum. So no one’s really making any decent money, we’re all just stuck there, and we’re pretty much spending every spare moment bitching incessantly. And then, after the dinner rush had died down, Doc came in.

Doc was one of our regulars. To be more specific, he was my regular. He was, as his name suggests, a doctor—now retired—in his late sixties or early seventies. He came in several times a month; not every week, but thereabouts, always alone. Like many regulars, he had a “usual,” a somewhat complicated special order that was uniquely his, pretty much a dinner of his own creation made up of various bits and pieces of the menu put together. I’d be lying if I said I still remembered it (I think it involved the Pan Seared Tilapia, sauce on the side, with plain steamed broccoli and shrimp skewers no spice, side of three slices of lemon and two sides of butter, but I might be making all that up), the point is that I was the only one who could keep it straight at the time, and as such I was the only one he trusted with his dinner, so he would sit in my section every time. He was a good tipper and nice enough guy—a little demanding and, shall we say, specific—but at least he appreciated the service.

I hadn’t been expecting to see him; I would have thought, had I thought about it, that he would be with his family. I said hello, and wished him a happy Thanksgiving. He responded in kind and it was clear, as the words hung in the air, that we both thought better of it too late after the words had come out of our mouths. A little embarrassed, I went to our usual routine: me asking him what he was in the mood for tonight and him pretending to hem and haw before ordering the exact same thing he gets every damn time he comes in. This time though, he asked if we were doing anything special for Thanksgiving. I mentioned the “Platter,” and immediately followed up with “But Doc, it looks awful, you really don’t want it.” He said that he was in the mood for turkey and, what the hell, he would give it a try. 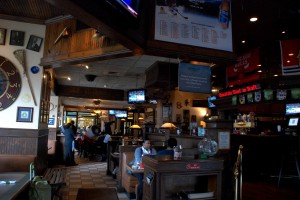 Things had slowed to the point where I could hang out for a bit. It’s something we would do sometimes if it was slow, we’d shoot the shit a little before I went on to the next thing. I don’t usually like to get too personal with my tables, even my regulars. It’s such an awkward dynamic; I’m not completely free to be myself and I’m still in a subservient position so I’d rather just stick to surface politeness and keep it at that. But it was Thanksgiving and there really wasn’t much to do, and the man just seemed so damn lonely. He asked me what my family was doing for dinner and would I be seeing them—I said I’d be getting the leftovers tomorrow. I asked him in turn if he’d be seeing anyone and he replied that, no, his children were both in California and he hadn’t spoken to them recently. As the conversation was turning in a somewhat uncomfortable direction, I excused myself saying I had to check on something in the kitchen.

I did have a couple of other tables to tend to, which provided me with a distraction while Doc waited for his food and read the paper, like he usually did. I went out for a smoke and when I came back he had gotten his dinner.

He looked glumly down at the plate and poked at the turkey with his fork.

“I told you,” I said, not really surprised. “Do you want the usual?”

“No,” he said. “Thanksgiving you should have turkey. My ex-wife couldn’t cook for shit, and I ate her turkey every year. This actually kind of reminds me of it.”

I laughed, and told him all right then; if he needed anything let me know. He ate the whole thing, including the mixed vegetables —which surprised me since I’d never seen him eat any vegetable that wasn’t plain steamed broccoli. He read his paper and finished with his usual dessert of two cups of half-caf coffee and an Apple Sizzler. He left me his usual $8 on $35 and said goodnight.

Things were winding down and I was getting hungry myself since it was getting to be dinnertime for us—around 10 o’clock. That’s when Maria, the manager, came up to the front and told us not to order any food for ourselves but to meet in the back in five minutes. We went to the back of the restaurant and saw that she had set up a little buffet with several casserole trays covered in aluminum foil.

“I know how much it stinks that we all have to be here,” she said, “So I brought some stuff from home to share, and some other people pitched in some things too.”

She’d brought jalapeno cornbread and arroz con gandules (rice with pigeon peas); Charlene, from the morning staff, had brought in a huge tray of homemade macaroni and cheese earlier that day. George, our senior manager, had contributed a couple of Jewel-brand pumpkin pies. There were also a whole bunch of unsold “Bennigan’s Thanksgiving Platters.”

And so we sat, and ate our crappy turkey alongside some really good mac ‘n’ cheese, and joked and bitched and made lewd comments about what the gravy looked like. And it was actually a lot of fun. In retrospect, my favorite part was that the company didn’t kick in a single thing except for the unsold turkey dinners. It was that Maria had taken it upon herself to make corn bread and rice for her staff while her sons were having their Thanksgiving at her mother’s house, or that Charlene had brought in the mac ‘n’ cheese for a meal for her coworkers that she wouldn’t even be at, or that, as I found out later, George (a somewhat surly gay man in his late fifties who could at times be dryly hilarious) had used the office’s petty cash to buy the pies. It was a weird, quasi-family atmosphere, the kind that can only come about between people sharing in a uniformly unpleasant situation and trying to make the best out of it.

I worked at that Bennigan’s for just under another year. Near the end of that time, Doc had started to come in less and less, and the last few times I saw him, he did not look well. And then, nothing. I never saw him again. Months after I left I heard from a friend of mine still working there that his children had actually contacted the Bennigan’s wondering if we had seen him recently; they hadn’t been able to get in contact with him for awhile and somehow knew that he had frequented there. The idea that in the last two years I, just some punk kid waiter at a Bennigan’s, may have known their father better than they did (and I certainly didn’t know him well), it was just one of the saddest fucking things I could think of.