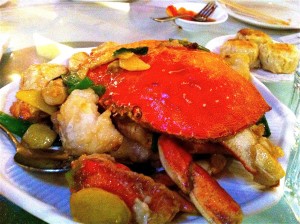 This year I broke down and finally asked what Jesus would do. It happened at the 3pm Christmas Eve mass in the back of Old St. Pat’s church in the West Loop. Somewhere during the Gospel pageant, when a tiny Mary wrested plastic baby Jesus from his makeshift manger and hoisted him by his head like Michael Jordan palming a basketball, my mind started to wander.

It traveled beyond the pastel-painted Celtic-style columns of the church and settled into the Near South Side, amidst the steam and neon down at the corner of Wentworth and Cermak in Chinatown. There, I wondered, given the fifty or so places to score Chinese food, where might Big J eat Christmas Eve dinner?

This might seem odd, but while Jesus is the reason for the season, we also know he was a Jew. And everyone knows that Jews love to eat Chinese food on Christmas Eve. Plus, one really could use divine intervention on this matter, for there are so many factors to consider.

Does authenticity rule the day? Is it a cold chili-spiked tendon at Double Li or an earthy Yunnan mushroom feast at Spring World kind of Christmas?

Do you have a cold or do you need a cheap facial? If so, it’s probably a good idea to sit down for a hot pot at Mandarin Kitchen.

If you’re a fan of the movie “A Christmas Story,” you’re probably jonesin’ for a sweet Ameri-Cantonese style feast at Moon Palace.

If bubbe is on board and you need a fancy white-tablecloth meal, you’ll probably want to head to the natty dining room at Evergreen.

Or maybe you just want to go where Al Capone got his General Tso’s chicken, in which case you’d head up the stairway-to-heaven-like cluster of steps to Won Kow, established in 1927, the oldest continuously operating spot in Chinatown.

Unfortunately, I’m a pretty poor Catholic. I suspect that God realizes my real religion is pork and thus he does not appear as a burning Sichuan pepper to advise me on my holiday culinary dilemma. Still, I know I must not dawdle on the choice, lest I miss communion. Anticipating the big feast to come, I’ve fasted prior to mass. And though the “body of Christ” tastes like Styrofoam, experience has shown that springy meager wafer is surprisingly effective at preventing one from passing out before snagging a post-mass egg roll.

So, where to go? While 2010 was the year of the tiger, any casual foodie knows it was also the year of eating weird shit. Organ meats were so popular Lincoln Park ladies who lunch were sucking down sweetbreads as if they were Caprese salads. As such, this year I’ve eaten more mystery meats than usual, and so I decide to take a break and dine at the relatively accessible Triple Crown.

Make no mistake. Triple Crown isn’t the house of nuclear-orange-colored-glop-covered sweet-and-sour chicken. It still serves plenty of chicken feet and stir-fried frog. But they have Crab Rangoon too. An even bigger draw is that, unlike most spots which stop in the early afternoon, Triple Crown serves Dim Sum until 2am.

As a bonus, you get to chow in a flashing LED-clad interior-design mash-up of a traditional Chinese restaurant and a set piece from a Las Vegas Liberace impersonation show.

The greatest thing about Triple Crown though is the James Bond-villain-worthy assortment of tanks on the east wall featuring vicious crab and assorted swishing live-fish. Then again, though they are still clacking their claws against the aquarium walls, I wonder for a moment how fresh or happy a crab really can be in a two-square-foot cold-water flat.

I still can’t answer whether they need crustacean Xanax, but I can say, bathed in a crispy coating and showered with knobs of stir-fried ginger and verdant hunks of scallion, these bad boys are fresher, and tastier, than any crab I’ve had that didn’t come from Dirk’s Fish Shop.

Just as fresh as the crab are the stir-fried chicken hand-pulled noodles. Silky, with a slight bite, they feature a succession of telltale kinks and imperfections no self-respecting extruding machine could ever dream of.

Sizzling sliced tenderloin with black pepper, the Asian answer to Mexican fajitas, served on a cast-iron charger plate is garlicky with a slow burn and a hint of citrus. The only thing that might make this better is if the chef added a dollop of sweet glaze to counter the fire.

Then again there’s plenty of sweetness with the hoisin sauce that accompanies the awesome glutinous Chiu Chow dumplings stuffed with shredded pork and peanut. These umami-bombs are much better seasoned than those at my usual Chiu Chow go-to spot Shui Wah.

In fact most of the dim selections at Triple Crown, whether it’s crispy golden fried egg rolls that shatter in your mouth like a savory Butterfinger or the pan-fried chive dumplings sporting a vegetal funk and a caramelized pan-seared crust, are as good or better than what you find at Shui Wah. In fact, if a certain Messiah shows up sometime lookin’ to sate his dim sum cravings, I now know just where to send him.