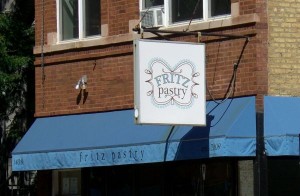 We all know from the card and chocolate crowd that Valentine’s Day is the ultimate time for making sweet overtures to the one we love, a chance to find respite from the deep-winter chill in the arms of another. And playing on that theme, chef Nate Meads of Fritz Pastry offers a Valentine’s Day dinner that is as sugary as it is intimate.

Meads has an exceptional resume as a pastry chef, having previously made sweet things for such prestigious establishments as Blue Water Grill, Tru, Everest Room and Brasserie Jo. He left the restaurant biz, however, in order to carve out his own piece of the pie (no pun intended), starting Fritz Pastry, 1408 West Diversey,
in May of 2009, and it’s a testament to Meads’ talent that he’s been able to get the little boutique patisserie off the ground in the middle of a recession. And after more than a year and a half of excellent service to the community, Fritz has racked up a fair amount of buzz. While you might have heard about their killer macarons, Meads’ favorite Fritz production is his chocolate croissant. “I tend to eat at least one a day, to keep me warm in winter,” confesses Meads.

With the Fritz name secure, Meads has decided to dabble in composed dishes again, and came up with a pop-up restaurant. For one night only, on Valentine’s Day, Meads will transform Fritz’s humble interior into an intimate bistro. And wait until you hear what they’re serving: a seven-course prix fixe, including a muscular showing of five courses exclusively for dessert.

“I don’t think dessert for dinner is a good idea,” Meads says. “In fact I’m pretty sure it’s a bad idea. We’re not trying to replace dinner; it’s just that if you come to a place that has ‘pastry’ in its name, then it’s expected that pastries would be showcased.” (David Wicik)