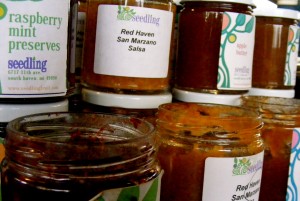 Lincoln Park is unruffled this Saturday morning as a gentle snowfall adds another layer of white to the city surface. A handful of weekend runners and dog walkers scamper in all directions, while a steady flow of locavores head toward the Peggy Notebaert Nature Museum for the Green City Market (GCM). The only consistent year-round farmers’ market in Chicago, GCM has built up a community not only for its customers but also for its farmers.

GCM’s Outdoor Market, held spring through fall at the south end of Lincoln Park, can get pretty wild. Sixty vendors, thousands of patrons, limited produce and six hours of business twice a week make for a hectic day at the office for these farmers. “It’s awesome when it’s nice and we’re outside. It’s fun but it’s way more work,” says Adam Hausman of Seedling Farms. There are just over a dozen vendors alongside Seedling Farms on the second floor of the museum. If the farm representatives aren’t talking product to market goers, they’re casually perusing the scene themselves to see what the competition is offering.

Because Seedling is a fruit and vegetable farm, it must use temperature-controlled storage of last season’s crops or convert perishables into products with a strong shelf life to participate in winter markets. This endeavor goes for most vendors at GCM. The Indoor Market is full of produce grown locally but not recently. Certain domestic fruits and vegetables flourish in winter, but not much grows during the months after December in the Midwest. Hausman, who works alongside Josh Gunther, showcases apple ciders and frozen berries as well as a variety of preserves, mustardos and salsas made with Seedling Farm produce grown in South Haven, Michigan.

With a basketful of miniature spoons, Hausman and Gunther offer samples. Almost every vendor in attendance does the same. From pieces of cheese stabbed with toothpicks to a dollop of jam on a cracker, these tastes lure the patron to explore everything the market has to offer. It also gives newcomers an idea of what to expect from the farm when their crops come in fresh. While farmers are happy to tease you with tastes of their product, they are even more excited to taste each other’s samples.

“We trade [with each other] for food or different products. We all work together and the staff is typically the same people—It’s like a family,” says Gunther at the staircase to the second floor of the museum overlooking Lincoln Park. He had done a bit of wandering around the first floor catching up with other farm stands. The view from upstairs reveals the relaxed tone of the Indoor Market. Farmers, chefs and volunteers casually discuss future crops and contentment with their current product while children visiting the nature museum run around trying to escape the claws of their parents.

As the afternoon creeps on, products disappear from previously full tables. Business is good considering the farms haven’t had a fresh crop outside of a greenhouse in months. Looking across the snow-covered park, Gunther reminisces about the Outdoor Market’s frenzy, which doesn’t compare to the children screaming at the museum’s life-sized stuffed polar bear. Which does he prefer, indoor or outdoor? “They’re different,” Gunther smirks. (Tiana Olewnick)

The Green City Market’s indoor season takes place every other Saturday in the Peggy Notebaert Nature Museum at 2430 North Cannon Drive, 8am-1pm. The market begins its outdoor season May 4.