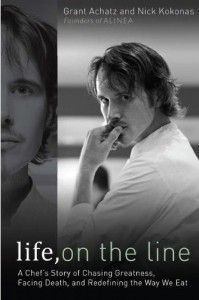 Grant Achatz could sell ice to Eskimos. Of course, the chef/partner of the best restaurant in America (according to Gourmet and S. Pellegrino World’s 50 Best) would melt that ice, infuse it with a phase-shifting stabilizer so that it re-formed as ice the minute an Inuit shoved it in his mouth.

Point is, Achatz, who has reached a level of canonization befitting of saints (miraculous tongue cancer survivor—it’s only a matter of time) and Nobel laureates (why not), could sell his kindergarten finger paintings for a princely sum. His book released this week, “Life, on the Line” (Gotham, 400 pages) co-written with his business partner Nick Kokonas, will likely be a bestseller.

If not, the recently recorded Fresh Air interview and rumored pending feature film starring Ethan Hawke/Christian Bale/Tobey Maguire/George Clooney (okay, I made Clooney up) as Achatz, will put it over the top.

There’s really very little new I could say that would influence a determined foodie or People magazine bio-hound’s acquisition of the book. As a food journalist, I wasn’t even sure I’d write about it. What’s left to say about the toque that launched a thousand profiles? And so, I’ve decided not so much to be a food journalist here, but instead to add to the Achatz culinary canon as a genuine fan.

Having spent hours on Google chat, the phone and in the kitchen working as a contributor on the Alinea cookbook, I wish I could say I write as a friend, the ultimate insider, but few really know Achatz that way. In fact if there’s any criticism of the book, it’s that Achatz never dwells too deeply on anything. His ex-wife is a bit of a cardboard cutout, and when his long time sous chef, Jeff Pikus, who ran Alinea during his absence, quits, Achatz says, “fuck him” and moves on. Then again, this lack of nostalgia or self-examination is the essence of Achatz’s success. He knows cancer doesn’t respond to sentiment and so he gives it the big middle finger too.

That’s how I found myself in the middle of his chemotherapy and radiation treatments, standing alone in a far corner of that gleaming stainless steel theater and laboratory (admittedly a kitchen, sure, but not really) watching a night unfold. I’d wanted to see a typical service from beginning to end to inform my writing on the book. Though, as usual with Alinea, little was typical.

It is one thing to say that Achatz missed a few services during his entire cancer treatment. It was quite another to watch him during that time. His neck muscles, atrophied from the treatment, conjured the tenuous stem of a Riedel Bordeaux glass. His esophagus, sloughing off like the epidermis of a Georgia rattlesnake, transformed his voice to a whispered rasp. To soothe the fire in his gullet, every few hours he’d reach into a lowboy fridge and grab a milkshake, a very non-foodie mix of Ensure protein supplement and Häagen-Dazs. It could have been crystallized ice-milk from the corner convenience store, for Achatz had lost his taste a while ago and could only feel the slither of cold on his tongue at that point.

He may not have been able to taste, but by god, he still could command. That night was the first time I’d tasted his signature black truffle explosion. While the dish harbored that familiar busted-water-balloon-like burst of black truffle tea I now know so well, the buttery finish of the delicate agnolotti was a little salty. Before I could even comment, Achatz saw the confusion on my face and flashed a sideways glance at the hapless cook responsible for the dish. Achatz’s sous chefs Dave Beran and Greg Baxtrom descended on the station and slurped up the beurre monte, the emulsified butter sauce used to poach the pasta, with their tasting spoons. The batch was dispatched and started anew.

Around 11pm, toward the end of the second service, Achatz, who’d by this point finished and surveyed somewhere between a thousand and fifteen-hundred plates, was pacing and looking my way. He eventually came over and said I could go home. I’d told him that I really wanted to see the end of service and that I’d hoped to stay. He returned to his station. A half hour later he disappeared from the kitchen, came back after a few minutes swaddled in his hoodie with his Mac laptop in hand and told me he was going home.

I’m positive he wanted me to go home because he wanted to outlast me. And frankly, he did. I’d rolled in around 4pm at the end of prep. He’d been there since noon. My calf muscles ached a bit from all that standing, but he was near death and he was still kicking my ass.

I’d like to believe this book “will likely be a bestseller,” but I have to wonder how the non-foodie civilian will respond to what many times feels like kind of an insider narrative. I loved it; my wife loved it, but will the general book-reading public? Not sure (and I doubt Achatz and Kokonas care one way or the other). Interesting comment about the one-dimensional aspects of a few characters. That seems a valid point, and the lack of depth with which some of the characters are drawn reflects, I think, the somewhat “interior” nature of the chef. He is… Read more »