by Brian Hieggelke
March 7, 2011Filed under: 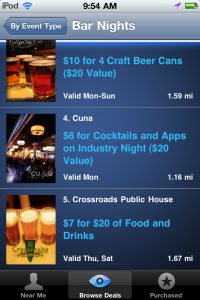 Fueled by the phenomenon of Groupon, deal-of-the-day marketing is changing the way people live. Every morning tens of thousands of Chicagoans wake up to an email offering an outrageous bargain for anything from a boot-camp exercise class to parachuting out of a plane. Even the lazy acrophobic is persuaded to purchase these deals because of the enormous price reductions. While the discounts are remarkable, those who prefer to maintain a steady lifestyle of drinking with friends are more interested in saving money on things they already do regularly. Poggled.com is a nightlife destination site that focuses on drink, food and event specials in Chicago bars and restaurants. Unlike web-based deal-of-the-day competitors, Poggled offers “real deals in real time” with its new iPhone application, explains the company’s co-founder Joe Matthews. Because “people don’t like to make decisions until they are walking out the door,” says Matthews, a deal can be discovered, purchased and instantly redeemed while already sitting comfortably in your local neighborhood tavern. For the more adventurous social drinker, registered users can search for deals by day of the week as well as GPS location using the Poggled iPhone app to scout out a new bar scene adding a splash of spontaneity and savings to their recreational routine.

Poggled, currently working with more than 100 Chicago bars and restaurants, has big plans for expansion and counts the co-founders of Groupon among its backers. While the company is excited to enhance how Chicagoans experience city nightlife, they understand that when dealing with alcohol there are social and legal responsibilities. “None of the deals emphasize overconsumption,” Matthews says. Poggled plays it safe working closely with lawyers to follow Illinois liquor laws and maintain a mature stance on social drinking. Its name, however, stems from an old British military slang for someone who is hammered. (Tiana Olenwick)