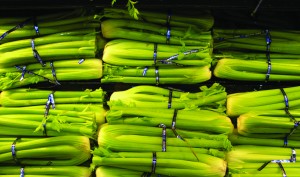 “Yesterday there was an attractive man,” says my girlfriend as she wheels her cart into the produce section, “about fortyish, who was ahead of me in the checkout lane. He was buying a box of condoms, K-Y Jelly, artichokes and a bag of chocolate-chip cookies. Isn’t that interesting? Why those things together?”

“No. I think it was his first time having her over to his apartment.”

“His new girlfriend,” she says as she picks through the tomatoes. “In fact, last night was the first time he’d slept with a woman since his divorce.”

“His divorce? Did you know this guy?”

“Of course I didn’t know him. Never saw him before in my life.”

“Then how could you possibly have known that he was divorced?”

“First of all, he wasn’t wearing a ring, and he was too good looking never to have been married. Secondly, he wouldn’t have had to buy the condoms otherwise. His girlfriend is recently divorced too, hence the K-Y Jelly.”

“What? Why ‘hence’? How are any of those things possibly related?”

She ignores my question and continues to thump the cantaloupe. “They met at the court-ordered parenting class they both had to attend. They had coffee after the last class, exchanged emails and then a few days later met up for a movie and drinks. After that he sent her some texts that were charming in their awkwardness. They met a few more times for coffee, and then he asked her to come to his place for dinner on a Saturday night when they didn’t have their kids. He’d gone back and forth about the condoms. He didn’t want to jinx anything. But eventually he decided, ‘What the hell, at least I’ll have them.’ And since he was at the store anyway, he picked up the artichokes too. Thought it would sex up the salad.”

“It never occurred to me,” I say, “that a salad could be sexed up.”

“Clearly it never occurred to you,” she says, “or you wouldn’t be hovering over the arugula.”

“What about the chocolate-chip cookies?” I ask as I step away from the arugula.

“During one of their coffee dates, she had told him how much she liked eating them as a little girl, how she would come home to an empty house (her mother worked) and sit with a bag of them and watch after-school specials.” She lightly squeezes a lemon. “They ate them in bed after making love.”

“No, I mean all your wild speculation about his sex life is an invasion of his privacy. It’s none of your business. And anyway, how do you know he invited a woman over? Perhaps he’s gay.”

“What does that prove? What possible difference could there be between ‘his’ and ‘hers’ K-Y Jelly?”

She smirks and roughly tosses a bag of shelled walnuts into her cart.

“It just seems so intrusive,” I tell her, “like you’re peeping through his window shades.”

“Peeping? We were in the grocery-store checkout lane, for God’s sake. Where was I supposed to look?”

“When you watch somebody eat at a restaurant, is that intrusive?”

“That’s different,” I explain, “because condoms and lubricants aren’t involved. Only soup and salad.”

“Actually, you can tell a lot about a man’s sexual habits from the food he eats,” she says. Then, with a sudden twinkle in her eyes she adds, “My old boyfriend loved turducken.”

“What the hell is turducken?”

“Forget it.” She gestures toward a man reaching for a bag of organic peeled baby carrots. “Here’s an example. Virile men don’t eat baby carrots, let alone organic.” The man looks virile enough, but who am I to judge.

“I see,” I say. “Apparently it’s not sexy to avoid pesticides.”

“Whatever.” We pass by the pomegranates. “Any man who is confident about his sexuality also doesn’t eat pomegranates,” she remarks.

“Stick to the point. You should have kept your eyes off that man’s cart.”

She puts a cucumber she has been inspecting back in the bin and reaches for another. “Do you know what your problem is?” she asks without taking her eyes from the cucumbers. Before I can answer, she answers, “You lack any curiosity at all about your fellow human beings. Only the contents of your own cart interest you. And what’s in your cart, by the way? Lactose-free ice cream, celery and Grape-Nuts.”

“You don’t have to get personal,” I tell her, “I’m just saying that I think looking into his cart is, well, voyeuristic.”

“Of course it’s voyeuristic. That’s the point. Speculation about the private lives of strangers through an occasional cart peep is what gives life its texture, its depth. Otherwise, the world is a lonely place, and the people you pass on the street or sit next to on the bus or ride with in an elevator are flat and faceless. Absent speculation as to why an attractive man is buying artichokes and condoms, chocolate chip cookies and K-Y Jelly, the world is, for all practical purposes, dead.”

“Later,” she says, “I’m going to find the jelly rolls.” She turns abruptly and leaves me standing alone by the kiwi, the celery gone limp in my hand.

I love pomegranates…now I know why I’m so insecure about my sexuality. Does she do consultations?