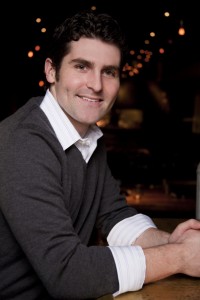 Brendan Sodikoff could be Liberace’s son. He’s got the same round cheekbones, the unmistakable wincing smile, and a pair of deeper-set eyes that draw you into a maelstrom of mischief, brooding and delight. Which is funny, because Sodikoff, owner of Gilt Bar, Maude’s Liquor Bar and the forthcoming Doughnut Vault and Ox Diner, is quite possibly the anti-Liberace. In this era of frenzied battles for food-blog scoops, Sodikoff launched his first project in February 2010, Gilt Bar, by saying almost nothing.

This wasn’t some wily move by a cunning impresario to generate buzz. It was a defense mechanism. The first-time restaurateur wanted to make sure things were ironed out before the throngs descended. Sodikoff says, “One of the worst days of my life was when I signed the deal. It was only me and this restaurant [Gilt Bar] filled with stuff. I couldn’t imagine where to start.” Add in the fact that he’d just acquired one of Chicago’s most snake-bitten spaces, home to excellent but short-lived gems like Havana, Aigre Doux and Pili Pili, during a crippling recession, and keeping quiet seemed like career suicide.

Months before he’d almost resigned his dreams. He says, “I’d been looking at spaces for six or seven years. I’d kind of given up on the possibility of finding something that would work because it was cost-prohibitive.” He lived across the street from River North’s Aigre Doux and noticed their clientele dwindling. He adds, “So, in my frustration I asked them if they’d consider selling their business. They couldn’t move fast enough.”

And the crowds, they came. Sodikoff is the fastest-rising local restaurateur I’ve ever seen. Thirteen months ago, no one had heard of him, and now he has four projects on the table. His second restaurant, Maude’s Liquor Bar, has three-hour-plus waits on weekends. 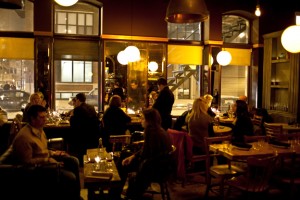 Overnight success is usually anything but. Sodikoff’s has been seventeen years in the making. At 15, he was skateboarding and surfing in San Diego. He got into some trouble partying with friends. His parents, who’d planned on leaving him behind while they toured Vancouver and Seattle, brought him along instead. He says, “I ended up watching lots of coffee shops and bakeries. They had these little windows where you could watch them making stuff. That was my entertainment for a few weeks.”

He immersed himself in artisan bread baking, and his mother’s friend got him an interview with chef Martin Woesle, a German culinary wunderkind, at Mille Fleurs in Rancho Sante Fe, California.

Though Sodikoff put in four years with Thomas Keller at The French Laundry, studied at Escoffier’s old stomping ground the Ritz, and did time with Alain Ducasse, Woesle, who grew vegetables for the restaurant and raised chickens, had the biggest impact. Sodikoff says, “It was magic. He was like a wizard. I didn’t understand how something could taste that good and look that beautiful.”

The real turning point came working for Lettuce Entertain You. Sodikoff says, “Working with Rich [Melman] is amazing. He’s the king. If I hadn’t worked for Lettuce, I would not be able to open a successful restaurant period.” At Lettuce, Sodikoff also worked to develop recipes with Rich’s sons R.J. and Jerrod while they developed Hub 51.

The secret to Sodikoff’s success is probably that he mixes the pragmatic business sense of the Melmans with the artistic finesse of a Keller or Ducasse. As such, his places are attractive to both scenesters and foodies. Sodikoff says, “They [the Melman’s] are so much more successful at generating covers, generating revenue. We’re willing to alienate people sometimes. We don’t have a burger. Would we sell a lot? Yes we would. But, we have so many other things we want to cook.” 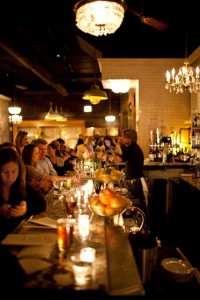 Sodikoff reminds me a bit of Rick Bayless. He’s very thoughtful and not operating a restaurant as much as he’s crafting a way of living. Sodikoff turns his profits into learning experiences and entrepreneurial opportunities. He’s starting a music company with the guy who programs the sound for his restaurants. The chefs at Gilt order whole pigs to experiment with cooking different parts and to practice their butchery, not just to fill out a menu.

Sodikoff who modeled Curio, the basement bar of Gilt, on the La Louisiane from the movie “Inglourious Basterds,” is also a great conceptualist who understands the importance of storytelling. His secret weapon toward this end is Kari Skaflen, a fashion photographer and blogger by trade. Though her photo work is in color, it feels like the comforting sepia antidote to the blown-out backgrounds and hyper-color soft focus close-ups typical of modern food porn. Her storytelling documenting the buildout of the Doughnut Vault (thedoughnutvault.tumblr.com), a fresh doughnut bakery located in an old cemented-over vault that was jackhammered out of the wall next to Gilt Bar, is a compelling mix of pirate lore, food history and doughnut-related hijinx.

Sodikoff has such creative people working for him (he went from zero to eighty employees in one year), it’s one of the reasons he’s stayed in the background. He says, “We will serve 250 people tonight. How many guests will I interact with? Maybe five. Their entire experience is because of someone else.” He adds, “I know when I was a line cook sweating in the back, no one cared about me. I want it to be different.”