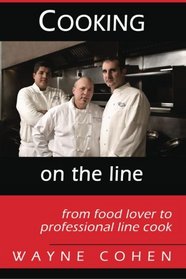 At a time when most people savor the benefits afforded by an AARP card, Wayne Cohen ripped a page out of the “Jackass” playbook and pulled a crazy young man’s stunt. In 2008, Cohen, then president and owner of the now-defunct Norridge-based Maurice Lenell cookie company, was bought out of his ownership stake. Instead of sailing off to the Turks and Caicos he became a line cook.

Most of what you know about chefs is of the baby-kissing-glad-handing and preening-in-the-glossy-food-magazine variety. That’s the executive chef. A hard-working one maybe does a few hours of prep and surveys the quality of dishes leaving the kitchen. They work hard, but mostly motivating personnel, writing menus and finding great products. An executive chef is not a line cook.

A line cook is the sweaty dude standing over an industrial range breathing grease and fire, working six pans at a time and trying not to flare up a few years worth of burn and knife scars. The line cook is doing this for six or seven hours having spent the previous four hours destemming tiny leaves of thyme or dicing celery into perfect one-eighth-inch cubes. A line cook is also generally a 22-year-old white kid with thirty-thousand dollars of culinary-school debt or a slightly older Latino dude who’s washed a hundred-thousand dishes to earn the position.

A line cook is not a 52-year-old former executive with spinal stenosis and a nerve sheath tumor like Cohen. Frankly, a much younger Cohen couldn’t hack it. He says, “I thought I might make it a career, but after you’ve shucked 200 ears of corn in 115 degrees of heat with no air conditioning, you think maybe, this isn’t what I want to do.”

Cohen becoming a successful line cook at near-retirement age was almost as unthinkable as the diminutive Rudy Ruettiger walking on at Notre Dame and playing. Which is kind of funny, because Cohen is kind of exactly like Rudy. As a starting varsity linebacker at Niles North High School he weighed in at five-feet-one and 113 pounds. By the time he’d graduated he was up to about five-feet-five and was recruited by a few Division I schools including Drake University. After his first year riding the bench at Drake, he transferred to the University of Toronto where he gained forty pounds of muscle and popped hulking defensive lineman almost twice his size.

While an executive, he became a serious foodie, dogearing the French cooking bible the “Larousse Gastronomique,” eating his way through various French provinces and whipping up Gratin Dauphinois on weekends. Whenever he ate out, he’d always keep one eye on the kitchen wondering if he could make it on the line. After leaving Lenell he answered a Craigslist ad for a new German restaurant in Chicago to quell that nagging question.

If you want to know more, you should read his book, “Cooking On The Line” which documents Cohen’s journey from being the low man in new restaurant hell to working stages at local gastronomic temples like Graham Elliot and one sixtyblue.

“On The Line” ’s promo materials suggest that Cohen’s book is in the same tradition of former kitchen pirate and now Travel Channel poster-boy Anthony Bourdain. Cohen is actually the anti-Bourdain. Bourdain might revel in the rough edges, but he ultimately celebrates and glorifies the swashbuckling. No matter how bad it gets, Bourdain’s chefs are always banging the pretty ladies, including just-married brides, in the back of the walk-in.

Other than the joy Cohen expresses about doing what he’d always dreamed of, Cohen celebrates little and instead documents the real tumult and conflict of working in a professional kitchen. Cohen says, “Maybe I’m working in the wrong kitchens, but I’ve never seen a cook get a chick during service. You’re too busy focusing on the cooking.”

After parsing Cohen’s tales of absentee owners, and whole kitchen staffs quitting before service, the kitchen dilettantes who think they should open a place because they own a crème brulee torch will be scared straight back to their cubicles. Every parent who is about to lay down a mortgage for their kid who thinks they want to go to culinary school because they watch Food Network a lot should get a hold of a copy. Cohen says, “If there were truthful ads for culinary school they’d say, ‘So you wanna make nine dollars an hour while standing for ten hours straight?’ ”

Because Cohen’s journey is more important than his destination, I’ve got no problem letting you know that the determination he honed on the football field served him well. Head over to Piccolo Sogno (464 North Halsted) and you’ll see a 55-year-old built like a Brink’s truck holding down the pasta station. Though he still looks like he could knock the puss out of a running back and he’ll likely have a determined scowl on his face, he’s a happy man. As he says, “I almost called the book, ‘How I Cured My Back, Lowered My Blood Pressure and Became a Great Cook’.”