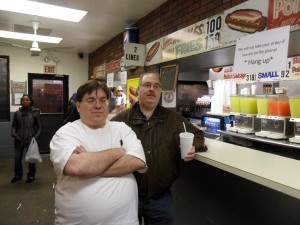 It’s Friday night at Cigar King in Skokie, and that means CPD Sergeant David Haynes and Chris Garlington are there, hosting their online radio show. At the back of the shop, sitting amidst a crazy tangle of cords, Haynes and Garlington suck their cigars and adjust the levels on the mixer board. The pair have hosted their talk radio show, “The Dave and Chris Show!” every week since 2007, and their “Beat Cop’s Guide to Chicago Eats,” a compendium of cheap and usually greasy cop favorites, came out in January. They hold court at Cigar King, bantering for two hours about pretty much anything from family life to politics.

Hang out with them for a little bit, and it’s easy to see how their chemistry translates into talk radio. Garlington is an irascible guy with a motor mouth, and coincidentally a liberal. Haynes is conciliatory, bluff and a conservative. The conversation inevitably turns to food—Costco hot dogs, to be precise. “They actually are good drunk food,” Haynes ventures. Garlington pounces. “And the show comes to a screeching halt. They’re terrible.” Haynes just chuckles.

After the show, Haynes and Garlington, plus longtime contributor Ken Parr head out to Jimmy’s Red Hots for a late dinner. The Humboldt Park joint, which earned an entry in their guide, makes perhaps their favorite hot dog in the city. That partly explains why, even on this unseasonably cold March night, they’re willing to stand at the counter, their breath smoking in the apparently unheated stand, and wolf down tamales, red hots and fries. It’s nearly ten, but neighborhood kids are still trickling in. After a few gruesome stories about crime in the area—Haynes worked this district, 025, last summer—the conversation turns to hot dogs once again.

“So what do you think about Gene’s & Jude’s getting voted top hot dog in the country?” Haynes asks. Everyone agrees that Gene’s & Jude’s more or less deserved the title. Wiener’s Circle, it’s clear, shouldn’t have even been in the running. But then someone mentions Superdawg. It’s like a bomb went off.

“Don’t even get me started!” Garlington exclaims.

“They suck! They’re crap! They’re made out of goat. They should be call Supergoat,” Garlington spits. “It’s not a hot dog stand, it’s a tourist trap.”

Jimmy’s night manager, Mike Lacassa, suggests that maybe the quality of the dog is a subjective thing. “For anyone who grew up in that neighborhood, that’s the greatest dog in the world.”

A little later, Parr reflects. “You know, my wife works at Lettuce Entertain You, so I can eat half price wherever I want. Where am I going?” He make a sweeping gesture.

“If there’s something you want to eat, it’s there in any neighborhood in this city,” Parr says. “It might not be the best, but it’s good. We have people from everywhere in the world here.”

“Yeah, and it’s not just that they’re here,” Garlington says, polishing off his tamale. “They’re fighting. They’re establishing themselves, and the way you establish a neighborhood is with food. And maybe a couple of baseball bats, but whatever. That’s what food is here, it’s an argument.” (Benjamin Rossi)

Chris Garlington and David Haynes will appear at the DePaul University Barnes & Noble, 1 East Jackson Boulevard on April 12 at noon.

If the axiom is, “never trust a skinny chef”, then these guys are the Bud Costello and Fatty Arbuckle of Chicago Eats. Mmmmmm . . . Jimmy’s.

Superdawg is good; very good. I wonder what Superdawg dislikers think of the incredible sausages at Franks ‘N’ Dawgs. If you’re ever at Grand Ave & River Rd in River Grove, drive NW on River Rd past Gene’s & Jude’s to Frannie’s in Schiller Park, or farther NW, almost to Oakton, and enjoy great food at Paradise Pup in Des Plaines. Frannie’s and Paradise Pup are better than Gene & Jude’s(or Gene’s & Jude’s, or Polk & Western Dogs of River Grove…).