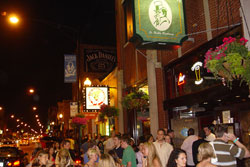 Best bar for elbow room and a dance floor

Casey Moran’s
This spacious bar is a favorite for birthday parties and the like, channeling a slightly more upscale vibe with its baroque/modern interior and bathroom attendants. Calmer and quieter than elsewhere, it’s easier to actually strike up a conversation here. Still, on the dance floor the music is blasting, and the DJ throws in some classic dance tunes along with the Top 40 hits, so if you’re craving a bit of Michael Jackson along with your Ke$ha, this is the place.
3660 North Clark, (773)755-4444

The Gingerman Tavern
If you can’t get with the Wrigleyville scene, or have simply had enough, The Gingerman is the place for you. Right next to Metro, The Gingerman attracts an older, alternative/punk crowd that doesn’t feel emasculated drinking the cider they serve on tap. The television is sports-free and the bar is cash-only, but if you can roll with the punches, you might meet a cutie in a black hoodie and glasses.
3740 North Clark, (773)549-2050

Best bar you don’t even need to go into

John Barleycorn and Moe’s Cantina
Even the huge square footage of John Barleycorn and Moe’s Cantina combined isn’t enough to hold their occupants—dozens of people linger in front, grabbing a breath of fresh air or smoking a cigarette. Passerby don’t need to enter either the beer garden or the tapas restaurant, which are under the same ownership, to strike up a conversation.
3524 and 3518 North Clark, (773)549-6000, (773)248-0002

Best bar for wingmen, too

Merkle’s Bar & Grill
A bachelorette-party favorite, Merkle’s is where you’ll find those women who were breaking it down on the party buses out front. Bring a friend, find a few bridesmaids, and split a Fish Bowl. By the time you’re done with the massive, neon-colored concoction, you’ll have confused straws so many times making out will be the logical next step of the saliva exchange. Don’t be put off by the girls’ night outs and the pink drinks, though—with sixteen beers on tap, Merkle’s targets its demographics for a male/female split straight down the middle.
3516 North Clark, (773)244-1025

Best bar if you’re too cheap to pay a cover

Rockwood Place
The sexy, clubby vibe at Rockwood Place attracts more miniskirts and stilettos than jeans and Cubs t-shirts. With no cover fees and comparably priced drinks, it’s a decent substitute for somewhere that wants your cash before you walk through the door. Crowded but not packed, there’s room to break it down on the dance floor; if that’s not your thing, nab a booth and give those high-heeled feet a rest.
3466 North Clark, (773)880-2222

Sluggers
People go to Sluggers for the same reason they went to frat parties—to get trashed and hook up—and they aren’t disappointed. With a bar in the center, Sluggers has good sightlines that make it easy to scope the whole scene before moving in for the kill. Head upstairs to the “sports complex” for the batting cages (Who wouldn’t want to follow up those Jell-O shots with a few baseballs whizzing precariously close to your head?), or hit the dance floor, where someone is sure to be checking you out from the sidelines.
3540 North Clark, (773)248-0055

Trace
Open till 4am Sunday through Friday and 5am Saturday, Trace draws the crowds when all else is closed. Arrive before 2 to skip the crowds, or come after then if you’ve held out on going home with someone. A slightly older crowd—in their late-, instead of mid-twenties—contributes to the more laid-back vibe.
3714 North Clark, (773)477-3400