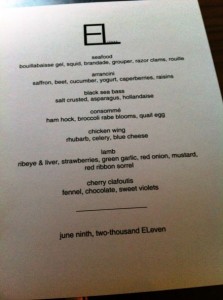 Phillip Foss’ confidence has never been in question. “Literally, I’m making this up as I go,” he says. He debuted his Meatyballs food truck before the City Council had amended the ordinance that prohibited cooking fresh food onboard approved food mobiles. With his latest culinary experiment, a fine-dining restaurant simply called EL, he’s fully aware he is riding on blind faith that anyone will even show up.

“The way I’ve always lived my life and the way my career path has wound up has always been about being outside the box,” Foss says. “I’m doing this, opening the restaurant this way because I feel it’s the best way for my vision to see fruition. It’s definitely a bit maverick, but I’ve kind of taken a ‘Field of Dreams’ approach to it—if I build it, they will come.”

Using the space he’s been running the Meatyballs operation from—an unassuming dead-end street on the far west end of Pilsen—Foss is putting together a menu based on his own ideas of “elevated” self-expression, with everything from seafood to chicken and lamb. It’s a “multi-sensory” tasting menu that requires such an effort on the part of his bare-bones staff that if guests who’ve won reservations in the email lottery arrive after the 6pm start, they’ll have to sacrifice a course or two.

The small setting provides for a unique interaction between the kitchen and dining area, allowing the short list of guests to get the undivided attention of the staff. He realizes he might be asking a lot of diners, but his vision is so hardwired into EL’s concept that he feels the risk is worth it.

“You’ve got to sell yourself to coming into our world,” he says. “You’ve got to be ready to put down some inhibitions. I’m not sure at this point if we’re even going to be accepting dietary preference restrictions.”

EL is officially opening its doors on July 7, but adding to the seat-of-his-pants approach, Foss isn’t even completely certain it will be at the 2419 West 14th location where he’s currently doing dry service runs in preparation for the opening. “I’m not sure why I feel that way, but where it is right now, it might not be there when we actually open.” Still, interested parties can gamble on reservations by sending a message to reservations@ELideas.com. (Alex Baumgardner)