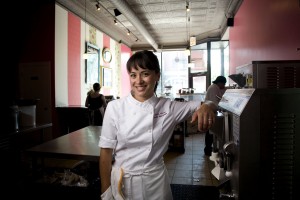 Gelato is a culinary must for starry-eyed Americans with Euros to burn on trips to Italy and elsewhere in Europe. But can this velvety smooth Italian cousin to ice cream claim its rightful spot in our local pantheon of desserts, or is it destined to remain in il purgatorio as a filler choice in old-line Italian restaurants, served in freezer-burned fruit bowls with mint garnish?

One pastry chef and store may not suffice as oracle for such questions,  but Jessica Oloroso, an erudite artisan who owns and operates Black Dog Gelato, has done much in a short time to bring gelato the acclaim and patronage it deserves.

Oloroso started her own business as a supplier to local restaurants and coffee shops throughout Chicago. She left her position as pastry chef at Scylla, a Bucktown restaurant best known as the launching pad for “Top Chef”-winner Stephanie Izard, purchased ice cream machines, and set up shop in Kitchen Chicago, an artisan communal kitchen, where she began work on her techniques and unique recipes.

Oloroso echoes the drive of many start-up business owners: “I really didn’t want to have to work for anyone. I wanted to go off on my own. I honed my particular path, which is ice cream and gelato, using basic skills I picked up in school and then lots of trial and error in the kitchen. I did a lot of reading and research too.”

In spring 2010, just over a year ago, when her craft and recipes were ready to take the plunge, Oloroso leased a storefront near where Scylla once operated and departed with her equipment, like many others before her, from the tight-knit community of artisan chefs at Kitchen Chicago. 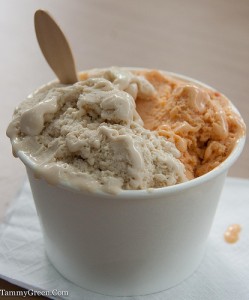 Oloroso hung out her shingle as Black Dog Gelato at the corner of Damen and Iowa in Ukrainian Village, and for the past year she has delighted a budding following of patrons with distinctive gelato recipes that include Mexican Hot Chocolate, Strawberry Balsamic, and Goat Cheese Cashew Caramel.

Oloroso draws on a range of culinary experiences in crafting her unique recipes: “I try to look to different areas for inspiration. A lot of times it starts with a taste or a smell of something else, and that generates a bigger flavor profile. My inspiration often comes from experiences at the grocery store, the market, or another restaurant. When I was working in restaurants, some of my ideas came from watching the savory side of the menu, and the ingredients that were coming into the kitchen.”

Difficult decisions are sold by the scoopful in Black Dog Gelato, unless you come back for more; some are served on a stick, like the Whiskey Gelato Bar, made of whiskey-infused gelato dipped in chocolate and rolled in crispy bacon bits.

But it’s not all rhubarb rainbows and bacon butterflies in Oloroso’s wonderful world of artisan gelato. She is every bit a businesswoman with bills and staff to pay as she is a creative student of the ancient craft of gelato making. With only a few short summer months to attract the foot traffic of Ukrainian Village before hunkering down for the long winter, Oloroso has as many utility functions spinning through her head as she does recipes and ingredients.

“The winter is brutal, and there is no way around it. Patrons will pay, and they love eating ice cream and gelato during the winter; all of us probably do to some extent, but the foot traffic is just not there. I provide a home-delivery service during the winter; five of the people who use the service live within a two-block radius of the shop, but they just don’t want to go outside,” Oloroso laughs.

For now, wholesaling has worked for Oloroso during the long winter. For the retail side of the business, Oloroso finds it hard to maintain the same summer selection and keep batches fresh: “There are definitely times you may walk into my shop and there may not be chocolate, because we like the freedom to experiment with new things and be as creative as we can with it.”